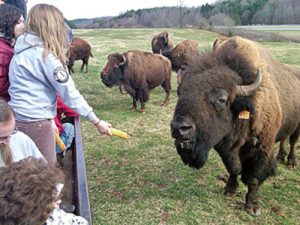 Appalachian farmers are developing new ways to connect people to the farm, including tours that provide guests with opportunities to get up close to farm animals like bison. Photo by Jillian Randel

Think of it as an extended growing season, where the opportunities arising from a region’s agricultural wisdom and the influx of tourists and conscious consumers are ripe for the picking. By marketing experience and education, not just products, Appalachian farms of every kind are going beyond the friendly transactions at the farmers market to take advantage of all that agritourism has to offer.

Abundant examples of agritourism — broadly, any recreational or educational activity that attracts visitors to farms — can be found throughout Appalachia. In fact, it’s one of the region’s largest draws. Here, families frequent pick-your-own berry farms, apple orchards abound and kids clutch the perfect pumpkin on a hayride to nowhere.

In Virginia alone, income from agritourism and farm-related recreation grew an average of 37 percent each year between 2002 and 2007, according to the U.S. Department of Agriculture. And the success story of agritourism in Virginia’s Shenandoah Valley, where it generates an estimated $35 million a year thanks to a high concentration of farms catering to residents of the commonwealth and beyond, is a case study in taking what Appalachia does best and making it better.

Nearby Charlottesville, Va., has been recognized as a top spot for agritourism with its bustling downtown City Market and century-old Carter Mountain Orchard, where rolling hills are covered with resplendent apple and peach trees — a picker’s delight.

Western North Carolina, well-known for its wineries, bed and breakfasts and popular stops along the Blue Ridge Parkway, is especially aware of possibilities. The results of a 2011 agritourism survey by North Carolina State University reveal the variety of activities, from yoga practiced in pastures to corporate trainings with rooster wake-up calls, taking place at farms in the state’s mountainous counties.

Word-of-mouth remains a powerful marketing tool for full-time farmers too busy to conduct consistent outreach. But more than half of the respondents to the N.C. State survey identified promotion and marketing as a challenge to getting their agritourism operation off the ground.

Fortunately, county extension offices and chambers of commerce are keeping regional agritourism opportunities in the public consciousness and on tourist’s to-do lists. Collaborations between tourism departments and nonprofits such as the Appalachian Quilt Trail connect multiple destinations and provide a new way to explore the region. And groups such as the Appalachian Sustainable Agriculture Project, which publishes an annual local food guide covering 60 counties in the Southern Appalachians, act as invaluable intermediaries between farms and consumers.

In late 2012, understanding the importance of networking the agricultural attractions in the region, the Appalachian Regional Commission announced plans to release a guide in spring 2014 to showcase Appalachia’s food heritage and agritourism offerings, including everything from farm-to-table restaurants to food-related events and festivals.
Finding agritourism opportunities has never been easier. So pick a place and experience all Appalachia has to offer.