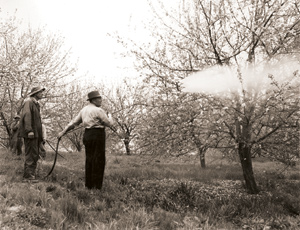 Workers spray lead arsenate at Bonhom Bros. Orchard in Chilhowie, Va., circa 1950. Though the pesticide faded from popular use in the 1940s, many growers continued to use lead arsenate up until 1988, when it was banned. Traces from century-old applications still remain in the ground today. Photo courtesy of Norfolk and Western Historical Photograph Collection, Norfolk Southern Archives, Norfolk, Va.

Since the dawn of agriculture, pests have been the bane of growers across the globe. Early evidence shows sulfur was used against molds more than 2,000 years ago in China. But it wasn’t until the rise of more concentrated and commercialized products such as DDT in the past century that pesticide use, and its resulting contamination, have exploded.

In her landmark book, Silent Spring, scientist Rachel Carson envisioned a disconcerting future where pesticides would irrevocably alter entire ecosystems. Appalachians are seeing this change firsthand, where the legacy of regional pesticide use is endangering the health of nearby soil and water, and upsetting the very agricultural potential it was designed to protect.

For 26 years Paula Janes and her family have lived in the same house in Dana, N.C., using the same well to draw water for drinking and household chores. Nothing indicated that their well water was riddled with one of the 12 most persistent pollutants, a pesticide called dieldrin.

In January of this year, Janes unexpectedly received a letter from the N.C. Department of Environment and Natural Resources telling her that the family’s well water was not recommended for any residential use. High levels exceeding the state standard for dieldrin — a pesticide derived from aldrin and used in the mid-20th century — had been discovered through water testing for a property transaction.

“It just hits you in the head, and you have this reaction of ‘What do you do?’” says Janes, describing how she and her family felt after realizing they could have been drinking contaminated water for years. They immediately let their garden go barren due to fears of toxic soil. Eventually they were told it was safe to shower, but for no longer than five minutes at a time. Drinking the water was still out of the question.

The Janes family discovered that dieldrin was first used in the 1950s by cotton growers as an alternative to the more dangerous chlordane and DDT. By 1970, it was banned by the U.S. Department of Agriculture for all uses except for culling termites. In 1989, both aldrin and dieldrin were fully banned by the U.S. Environmental Protection Agency. 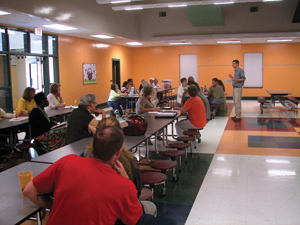 Dana, N.C., community members receive an update on well testing from the State Division of Water Quality on April 9, 2013. Photo courtesy of ECO.

Now, decades after it was discontinued, the ultimate source of the dieldrin in the town of Dana is murky. Though 24 wells in the community have tested above the state standard for the chemical, there’s little understanding of how it got there and in such high amounts.

In nearby Hendersonville, Seirisse Baker, an AmeriCorps water quality administrator for the environmental nonprofit ECO, explains the troubles in Dana.

“It can be very frustrating for residents who want to know how long ago and why this kind of thing happened,” she says. The subdivision may have been the site of former pesticide use, or contaminated soil may have been carried by water from elsewhere, ending up in the wells. In reality, Baker says, residents may never know all the details of how the chemical ended up in their wells.

ECO, along with the nearby city of Hendersonville, has helped affected Dana residents obtain bottled water, and an uncontaminated well tap at Dana Baptist Church has been opened to the public. “Everyone’s confidence in the local water has been broken a bit,” says Baker. The best bet is most likely a city water line from Hendersonville five miles away, as it has become apparent that the dieldrin in Dana is here to stay.

Appalachia is no stranger to the legacy of pesticides, as Michael J. Weaver, professor of entomology at Virginia Tech, can attest. He is currently studying the work of William Bradford Alwood, Virginia’s first entomologist and an early tester for lead arsenate.

First prepared in 1892, lead arsenate was used to protect apple orchards against the gypsy moth. In the early 20th century, stories from Europe of lead arsenate sickness caused concerns about using the chemical, as did a physical residue people began noticing on their fruit. Alwood attempted to wash the apples in elaborate acid baths, but to little avail. In the harvest season, the residue would often remain on the fruit.

Though lead arsenate use faded out in the 1940s with the advent of alternatives such as DDT, today there are hundreds of thousands of pounds of lead arsenate detectable in the areas where it was applied. Some Virginia and North Carolina orchards along the Blue Ridge Parkway still have lead arsenate in the soil, as well as other pesticides that were applied decades ago.

In 2000, Barber Orchard near Waynesville, N.C., was discovered to be another example of the region’s pesticide history.

In this case, irrigation pipes were used historically to bring toxins such as lead arsenate, DDT and dieldrin up to the orchard for spray applications with water. Over time, the pipes rusted, and the intended treatment spilled freely into local soil and groundwater. After a nearby well tested positive for contaminants and a larger investigation ensued, Barber Orchard was quickly labeled a superfund site by the EPA and a plan to remove over 100 acres of topsoil was put into motion. Today, over 50 percent of the cleanup is complete.

Another incident in 2010 in Shady Valley, Tenn., involved a misapplication of the pesticide fumigant known as metam sodium. According to the state’s Department of Agriculture, the situation developed after local resident Donna Reed filed a complaint over how a nearby pesticide application was conducted. She had experienced eye-burning, and eventually all 71 of the fish she raised in outdoor ponds, colorful koi and shubunkins, died.

Upon investigation, it was revealed that a subcontractor for B&W, a large arugula grower, experienced an irrigation line breakage that caused an excess amount of metam sodium to be released. The chemical is believed to mostly dissipate after an application, but other residents of the area also reported burnings of the eyes, sinuses and mouth, as well as respiratory problems that they claim haven’t gone away.

B&W and its subcontractor were fined for the leakage, and the Shady Valley incident is considered closed, even though locals are reportedly still dealing with health ramifications.

Pesticide disposal, something the Virginia Department of Agriculture has seen great success with over the past 20 years, is one way to limit the reservoir of toxins in the ground. Since its inception, the department’s service to farmers, pest-control firms, golf courses and homeowners has safely disposed of more than one million pounds of unwanted or discontinued pesticides.

The department’s director of communications, Elaine Lidholm, remembers the first rounds of disposal in the 1990s, when pesticides were sold in big paper bags and when the disposal unit once found a 50-gallon drum of DDT on a farm. The program continues to offer collection and safe incineration of pesticides throughout the state, helping to prevent the possibility of these chemicals entering local soil.

Alternative methods for dealing with pests are also on the rise. Rotating pastures can be beneficial for keeping pests from continually bothering livestock, and biological pest control relies on natural predation and parasitism in other organisms, proving effective for certain crops.

How pesticide use is controlled may now be the best solution to its resulting legacy. Integrated pest management systems, which seek to develop safe and economical pesticide techniques for individual crops, and the proper disposal of unused or outdated pesticides are crucial pieces of this approach. By keeping an eye on regional use, Appalachians can protect their farms, orchards, and communities from becoming additional chapters in the story of legacy pesticides.

Read about the decline in bee colonies and links to pesticides here.