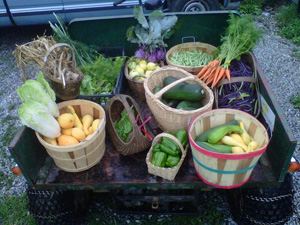 This harvest is what Rick Cavey, a Virginia farmer and local food activist, calls a “gator salad” – a collection of fresh vegetables in the back of his John Deer Gator. Photo by Rick Cavey

The welcome arrival of spring and summer in Appalachia represents that magical time of year when, instead of bundling up for a trip to the grocery store, we toss on a pair of sandals and head to the farmers markets to peruse the colorful and delicious bounty of locally grown fruits, vegetables and meats.

For some residents of our region, however, access to healthy local food is not as easy. Food insecurity, broadly defined as limited access to nutritious foods, affects roughly 15 percent of Americans, according to a 2011 U.S. Department of Agriculture report. Across Appalachia, the proximity to farmers markets and grocery stores, percentage of homes relying on federal food assistance, and general income levels vary greatly.

According to a 2011 study by the Virginia consulting group, SCALE, Inc., that compared similar foods in six states, most farmers markets in Appalachia and the Southeast are highly competitive with supermarkets for supplying basic commodities. Regional farmers markets are also increasingly accepting food stamps. But USDA data shows that swathes of the region still lack access to local foods, and many face tough choices at mealtime about how to healthfully feed and nourish their families.

Throughout the mountains, there are bright spots where individuals and organizations are eliminating barriers to locally raised food and livestock. With a little bit of luck and a lot of hard work, the nurturing and expansion of these and similar programs could provide communities with a variety of fresh, affordable sustenance for years to come.

According to its website, Grayson LandCare is a “locally organized group of farmers, landowners and residents concerned about economic and environmental problems.”

“Grayson LandCare is based on the idea of working from the grassroots up, hoping to monetize farming,” says Moles. “It has to be driven by the farmers.”

Members of Grayson LandCare, with the help of Heifer International and the Central Appalachian Network, have been a driving force behind developing a master plan for the Appalachian Regional Food Hub, a project that seeks to connect local food growers and buyers. Members have also been behind the establishment and operation of farmers markets in Sparta, N.C., and Independence, Va.

Additionally, Grayson LandCare is involved in programs such as Orchards of Hope, which works in conjunction with Heifer International and Blue Ridge Women in Agriculture’s Seeds of Change Appalachia initiative to plant fruit trees. The trees are placed in community gardens and near schools, making them widely accessible and emphasizing community wellness.

Moles and others have spent considerable time identifying the various obstacles facing their region’s farmers, including the pressing need for a local abattoir, or slaughterhouse, for more cost-effective processing of the area’s steady flow of livestock. Grayson LandCare Vice President Rick Cavey maintains that area livestock farmers could command up to three times the current price if such a facility were established.

Working feverishly to spread the gospel of local food production, Cavey has helped add 12 local producers in Grayson, Ashe and Alleghany counties to the regional New River Organic Growers roster of farms. He is a lynchpin of the Appalachian Regional Food Hub, and has helped organize winter workshops for farmers while also seeking outside funding from groups like the Central Appalachian Network and Heifer International to further the group’s mission.

“Food security is an issue, and if we can grow our own supply, we won’t be so dependent on energy prices and commodity prices,” Cavey says. “I just think that growing food is a great way to make a living, and I’m trying to show people that they can. If I can turn 12 people to grow food and another 20 people to eat that food, I’m pretty happy.”

For more information on Grayson LandCare, click to graysonlandcare.org.

With their opening date slated for September of this year, One Acre Cafe in Johnson City, Tenn., is another example of a community-based solution to hunger. The problem first came to the attention of the non-profit restaurant’s Executive Director Jan Orchard during her tenure as a school teacher.

“I used to teach first and second grade and I noticed that the students were really hungry,” Orchard says. “I became more aware of the problem of hunger and food insecurity not only in northeast Tennessee, but throughout the country.”

The One Acre Cafe plans to operate on the “Eat what you want; Pay what you can” ethos, a model that is spreading across the nation.

“[These] cafes are somewhat unique in that they have to appeal to a wide range of individuals,” she says. “They have to appeal to business people, as well as a person who has fallen through the cracks and perhaps lost their job. We’re also hoping to promote a dialogue between the different kinds of patrons that will be helpful.”

“What we’re really doing is going back to our roots, which is the community coming together to help one another,” she adds. “As my son Bryan says, these are folks that have found themselves on the other side of plenty.”

Thanks to the landlords, the cafe will occupy a 5,000-square foot space rent-free for the first year. And with a volunteer architect, volunteer interior designer and ample supply of donated materials, the restaurant is a shining example of community support.

“People are rallying to make this a place,” says Orchard. “We’re just the facilitators for the community to come together and bring the power to create this cafe. If the community is behind it, it will be something unbelievable. And we all sense that is something that’s going to happen. I think it’s that willingness we’re all feeling.”

One Acre Cafe is not the first operation of its kind in the region. The F.A.R.M. Cafe in Boone, N.C., exchanges meals for an hour of work for diners who are unable to pay. In Asheville, N.C., Rosetta’s Kitchen offers a donation-based plate and planning is underway for a sliding-scale restaurant called Sauté.

One Acre Cafe will be located at 603 W. Walnut Street, Johnson City, Tenn. 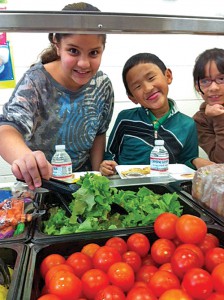 For most people who grew up eating school lunches, it is unlikely that those trips through the buffet line are their most mouth-watering memories. Meals consisted primarily of processed foods coming out of large tin cans, not fresh from the garden. For students in Kentucky, however, lunchtime is now a lot tastier and healthier with the burgeoning Farm-To-School program, which is helping students access local food on an everyday basis.

Introduced nationally in 2010 and adopted shortly thereafter in Kentucky, the program helps to connect local food to school menus. Tina Garland, Farm-to-School program coordinator for the Kentucky Department of Agriculture, is spearheading the state’s efforts to give school lunches a healthy boost from right down the road.

“From what we have seen, it’s not more expensive to buy local,” Garland says, noting that getting individual food service directors on board has been key to the spread of the program. “You have to be very creative because not one farm-to-school program is exactly alike. What works for one school won’t necessarily work for the others.”

According to Garland, the program benefits all involved. Food service directors can receive rebates through the Kentucky Proud program, which refunds a portion of the money spent on in-state growers back to the purchasing school. Kids are also responding positively to the program’s efforts, favoring foods from their home state.

“[The program] is continuing to grow,” Garland says. “Our goal is to have it in every county in Kentucky, but it’s solely dependent on food service directors. They make the decision whether or not to participate. But it is growing.”

Last spring, students and staff at Tucker County High School in West Virginia finished building a greenhouse at an elevation of 3,500 feet, one of the East Coast’s highest. And in Martinsburg, the Veterans Affairs Medical Center kitchen purchases local foods with the savings from a kitchen waste reduction program.

Across the Mountain State, farm-to-school projects are proving that West Virginia, a state that suffers from a 12 percent diabetes rate, is also fertile ground for change. Federal officials with the Appalachian Regional Commission and the USDA have lauded the state for its Road Map for the Food Economy, a plan to boost access to healthy foods while strengthening the agricultural economy.

The map was developed in 2012 by the West Virginia Food and Farm Coalition, a project of the West Virginia Community Development Hub; organizers refer to the program as a “food charter” that offers both a positive vision and a way to measure progress.