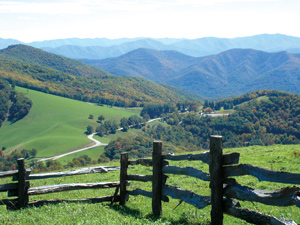 Once covered by corn, cattle and tobacco, the land surrounding Philip Fortune’s fifth-generation family farm near Asheville, N.C., was subdivided into roadways and developments.

Unable to continue operating without difficulty, he purchased 180 acres in nearby Greene County, Tenn.

Determined not to let his land succumb to the same development pressures, Fortune decided to place his farm under a agricultural conservation easement. With help from the nonprofit organization the Land Trust for Tennessee, his rich farmland and the waters of Little Chucky Creek should be preserved forever.

From 1982 to 2007, 23 million acres of farmland in the United States, an area the size of Indiana, was lost to development. To fight that pressure and to preserve their land’s agricultural value, landowners like Philip Fortune have increasingly turned to easements.

These legal agreements can take many shapes and sizes, but the basics are this: the landowner promises to keep the land in agricultural use in perpetuity, and in return, a land trust organization will enforce the agreement by monitoring the property for uses permitted in the contract.

Under easement, the landowner maintains ownership of the property, living and farming on it. However, landowners cannot develop or subdivide the land for any other use than agriculture. Now off-limits to developers, the farm retains its agricultural value, and the difference between that and its former developable value becomes the price of the farmland conservation easement.

The easement is then either sold or donated to an land trust. If the farmers sell the easement to a conservation group, they receive a sum that is typically used to pay back bills or further invest in the land. If the easement is donated, the farmer enjoys federal, state and local tax benefits such as a lowered estate tax, tax deductions or credits.

Not all farms will fit into a land trust or state agency’s criteria for conservation. For example, William Hamilton, farmland program director for the Southern Appalachian Highlands Conservancy, says that his land trust places emphasis on prime soils in western North Carolina and East Tennessee. “Only two percent of the landmass of Appalachia consists of prime soils,” he says. “They’re a finite resource and to eat local vegetables and grains, we need those soils.”

Regardless, landowners should always approach an organization if they’re interested in preserving their land. Different land trusts and state or federal agencies specialize in different ways of preserving property, and most organizations are focused on the same goal of forming agricultural districts of unfragmented, productive farmland.
Brent Bailey, executive director of the West Virginia Land Trust, says the idea of a farm’s future is most often considered by older generations who may have had another off-farm job or are retired, and are trying to figure out what to do with their land.

“As the landowner thinks about his or her legacy, many things pop up, such as setting off more property [for future structures] or letting the woods grow higher, [or] wanting to reserve the right to sell off part of this property,” Bailey says. “It’s rare that the final easement document simply reflects the first conversation with the landowner.”

In total, it’s both a financial and an emotional decision for the landowner. “It’s [a] pretty visionary, pretty amazing thing for a landowner to do,” says Bailey. “Subsequent generations will look at this protected property, and they will marvel that someone was willing to say [that] this land will stay in its current, undeveloped state.”

Bailey says one of the barriers for those interested in farming is land prices that have been driven up by nearby development. Under a farmland conservation easement, though, the land can remain at a lower agricultural value and present an opening for landless farmers looking to buy.

That’s where William Hamilton wants to get involved. Facilitating the sale of affordable land already under easement isn’t new, he says, pointing out that northeastern states such as Vermont have been doing it for years. It’s just that this facilitation isn’t happening that much, if at all, in central and southern Appalachia.

Southern Appalachian Highlands Conservancy seeks landowners that are interested in donating their farm to the land trust as a charitable gift and receiving tax benefits in return. The land trust will then put an easement on the land and put out a request for proposals from new and traditional farmers who want to buy the farm at its lower agricultural value.

Hamilton says he doesn’t expect people to beat down their door and give them farms, but he’s excited for the prospects of the project. “We’re not going to fix it all,” he says, “but we’re going to put [in] some good people … that will add a lot of value to these communities.”