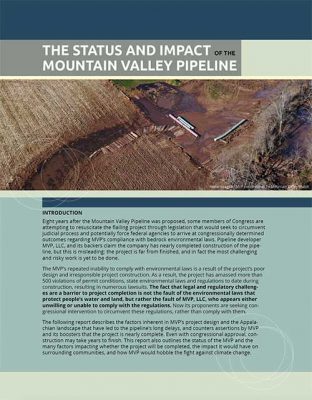 The Status and Impact of the Mountain Valley Pipeline (September 20, 2022)

Despite false assertions by Mountain Valley Pipeline backers that construction is nearly complete, substantial work remains. The work ahead includes nearly 429 water crossings — among the most difficult parts of a pipeline to construct — and the project still lacks authorizations from four federal agencies. This report explores the current status of the pipeline, the scope of the remaining work, and the harms that local communities have already experienced, including degraded drinking water, damaged farmland and harm to Indigenous sacred sites. 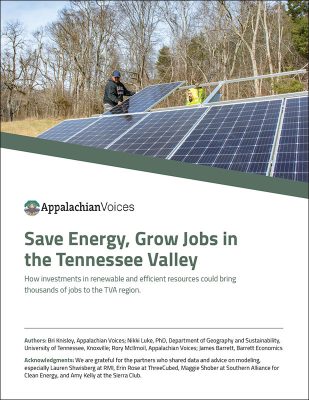 Save Energy, Grow Jobs: How investments in renewable and efficient resources could bring thousands of jobs to the TVA region (July 14, 2022)

The Tennessee Valley region is facing a potentially transformative moment as the Tennessee Valley Authority plans to close its remaining coal fired power plants by 2035. In our report, we examine the total jobs that would be created if TVA committed to consistent goals and investments in energy efficiency over a 14-year period. We also compared jobs outputs in TVA’s plans to convert the retiring Cumberland Fossil Plant to methane gas against three clean energy portfolio alternatives. 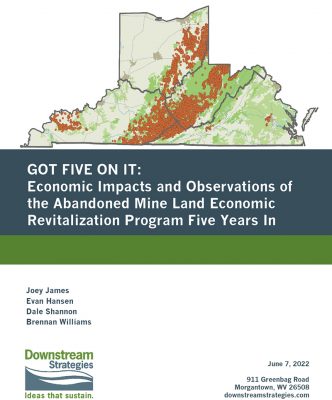 GOT FIVE ON IT: Economic Impacts and Observations of the Abandoned Mine Land Economic Revitalization Program Five Years In (June 8, 2022)

The Abandoned Mine Land Economic Revitalization Program was established in 2016 to return abandoned mine lands to productive use through economic and community development. Finally, after six years, there are sufficient data and case studies to evaluate the program’s progress towards its goals. This report explores the achieved and potential benefits of the AMLER program and other observations. 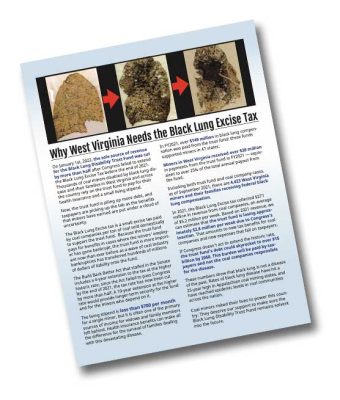 Rates of black lung disease have hit a 25-year high in Appalachian coal mining states and have reached epidemic levels in coal communities across the nation. On January 1st, 2022, the sole source of revenue for the Black Lung Disability Trust Fund was cut by more than half after Congress failed to extend the Black Lung Excise Tax before the end of 2021. Our report shows why the trust fund must be restored at least to its former level.

Moving forward at warp speed: Abandoned mine reclamation over the coming years

As Congress continues to negotiate the passage of the bipartisan Infrastructure Investment and Jobs Act, delays are sidelining both the reauthorization of the Abandoned Mine Land (AML) fund and the investment of $11.3 billion in AML funding included in the package. Newly-updated research from West Virginia-based Downstream Strategies indicates that the expiration of the authorization of the AML fund and the failure to secure the bipartisan bill’s large AML investment is jeopardizing jobs and economic growth in three Appalachian states: West Virginia, Virginia, and Ohio. 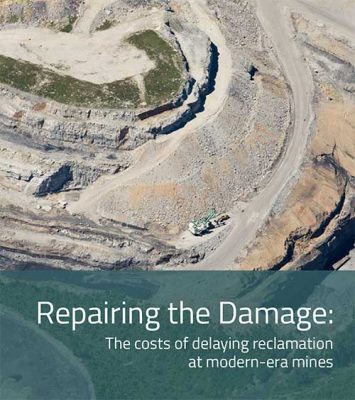 Repairing the Damage: The costs of delaying reclamation at modern-era mines (July 7, 2021)

Central Appalachia may be facing a new wave of abandoned mines as more companies declare bankruptcy and desert their cleanup responsibilities. Despite a federal law, some states have not set aside enough money to guarantee mine reclamation in the face of widespread bankruptcy. The report has determined that over 633,000 acres of coal mines across seven eastern states require cleanup, with an estimated price tag of $7.5 to $9.8 billion. This report, produced by Appalachian Voices, is the third paper in the Repairing the Damage series. 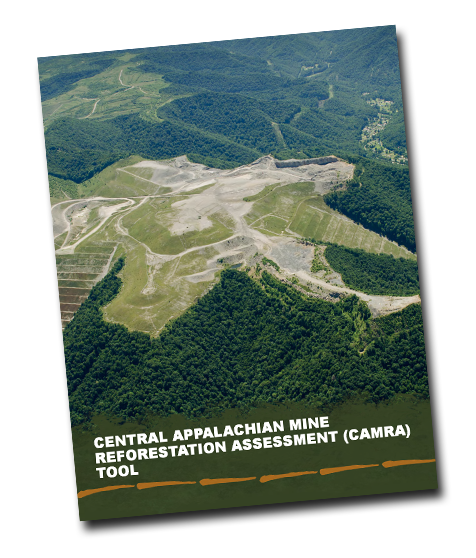 The Central Appalachian Mine Reforestation Assessment tool uses satellite imagery and a new mathematical model to monitor and characterize the state of reclamation and the growth of trees and other vegetation on surface coal mines in Central Appalachia from 1984 to the present. The data set and tool will help regulators, researchers and the general public understand the current level of mining and surface mine cleanup in the region. The report includes links to a webmap, GIS data and algorithms used in the creation of the model. This tool was developed by Appalachian Voices, SkyTruth, 4E Analytics, Green Forests Work and Downstream Strategies. 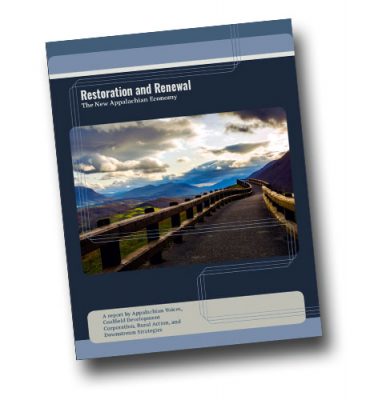 This regional report released by the Reclaiming Appalachia Coalition in January 2021 is the third in a series and further seeks to spur innovative economic development throughout Appalachia in communities where the landscape has been irreparably changed by coal mining. The report highlights successes from 2019-2020 and provides case studies of projects that advance community development amidst abandoned mine lands, or in some cases by reclaiming abandoned mine features as part of the project. The report is a collaborative project from Appalachian Voices, Coalfield Development, Downstream Strategies and Rural Action. 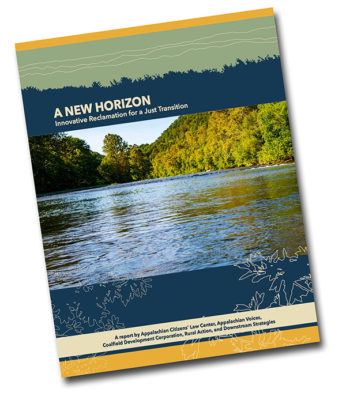 A New Horizon: Innovative Reclamation for a Just Transition (October 31, 2019)

This regional report released by the Reclaiming Appalachia Coalition in fall 2019 follows last year’s report and further seeks to spur innovative economic development throughout Appalachia in communities where the landscape has been irreparably changed by coal mining. The report highlights successes from 2018 and provides case studies of projects that advance community development amidst abandoned mine lands, or in some cases by reclaiming abandoned mine features as part of the project. The report is a collaborative project from Appalachian Voices, Appalachian Citizens’ Law Center, Coalfield Development, Downstream Strategies and Rural Action. 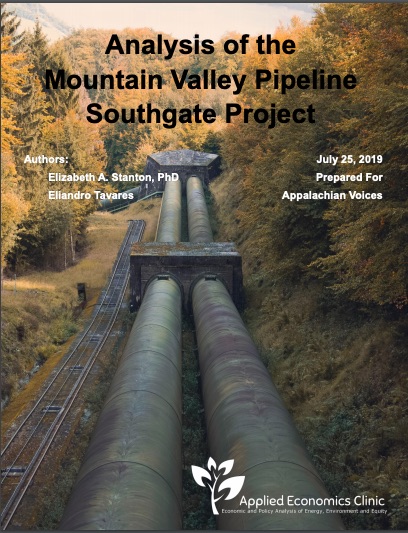 This report finds that neither the builder nor the anchor customer of the proposed Mountain Valley Pipeline Southgate extension project have provided “convincing evidence of a need for MVP Southgate.” The report exposes the flimsy assumptions used by MVP, LLC and PSNC Energy to justify a proposed 73-mile fracked-gas pipeline, and points out existing, cost-effective alternatives to new pipeline infrastructure. 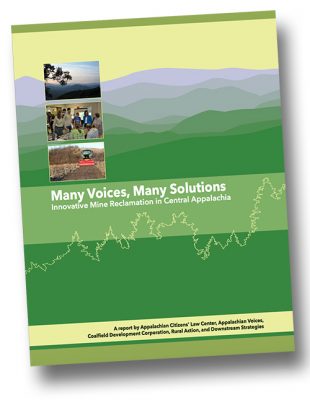 Many Voices, Many Solutions: Innovative Mine Reclamation in Central Appalachia (November 13, 2018)

This regional report released by the Reclaiming Appalachia Coalition in fall 2018 seeks to spur innovative economic development throughout Appalachia in communities where the landscape has been irreparably changed by coal mining. Specifically, the report provides case studies of projects that advance community development amidst abandoned mine lands, or in some cases by reclaiming abandoned mine features as part of the project. The report is a collaborative project from Appalachian Voices, Appalachian Citizens’ Law Center, Coalfield Development, Downstream Strategies and Rural Action. 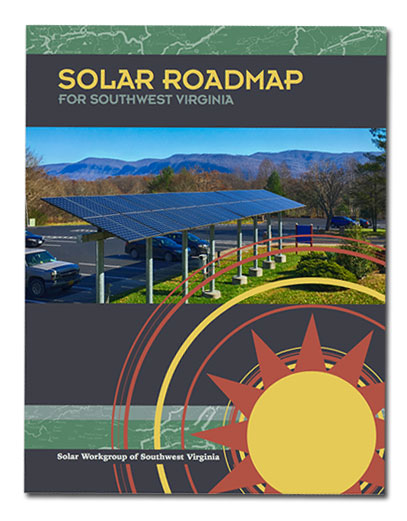 The Solar Workgroup of Southwest Virginia has released a report detailing a multi-faceted strategy for establishing a vibrant solar energy hub in the coalfields of far Southwest Virginia. “The Roadmap to Accelerate the Solar Industry in Far Southwest Virginia” explores the fundamental issues of accessing capital and financing options, promoting policies that support the solar industry, building workforce development and solar value chain opportunities, and maximizing community education. 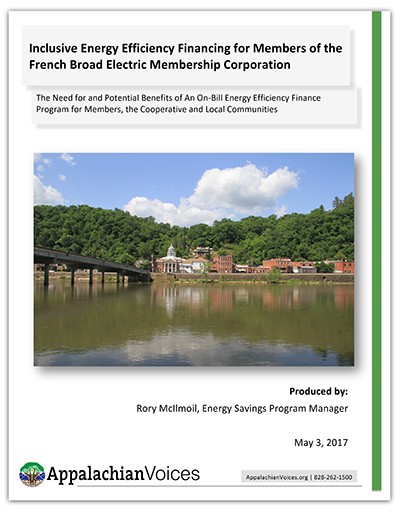 As many as 11,000 households in the service are of the French Broad Electric Membership Corp. in western North Carolina need energy efficiency improvements such as insulation and new heating/cooling systems. This report examines how a financing program that pays the upfront costs for home improvements can reduce families’ energy bills, improve the health and comfort of their homes and create local jobs, and calls for the rural electric co-op to offer such a program. 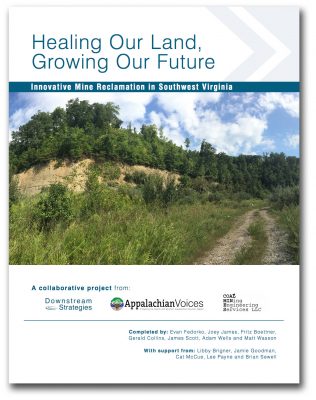 A report highlighting the economic development potential of more than a dozen abandoned coal mining sites in Southwest Virginia that could be repurposed into solar farms, community parks, sustainable farms or other innovative projects with federal investment. 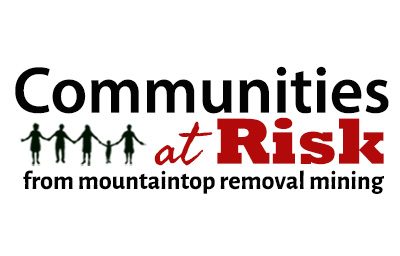 An examination of the proximity of mountaintop removal mining to communities in Appalachia. The study was conducted using maps and census data to detect differences in demographic and economic trends that correlate with recent encroachment of surface mines on these communities, and determined the communities most “at risk” from the practice. 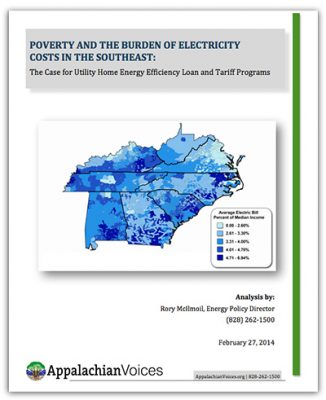 Poverty and the Burden of Electricity Costs in the Southeast:
The Case for Utility Home Energy Efficiency Loan and Tariff Programs (February 27, 2014)

An analysis of the relationship between poverty and electricity costs in the Southeast and promotion of stronger electric utility investment in residential energy efficiency. To supplement the report, we have published three maps as part of Google’s new Maps Galley illustrating the need for programs that finance comprehensive home energy efficiency investments throughout the Southeast.

An analysis of governmental data showing that coal mining jobs have increased since 2009 despite the coal industry’s claim that pollution limits on coal-fired power plants and oversight of mountaintop removal have threatened American coal production and coal mining jobs.

The Impact of Coal on the Virginia State Budget (December 12, 2012)

This report by Downstream Strategies analyzes the costs and benefits of the coal industry to Virginia’s state budget, and finds that the coal industry and coal-related activities cost Virginia $22 million more than was paid by these businesses in taxes, fees and other revenue to state coffers in fiscal year 2009. The single largest cost to the state in supporting the coal industry is roughly $37 million a year in tax breaks, a substantial subsidy for an industry that has been in decline for two decades. Appalachian Voices served as a consultant for the report.

A special 8-page report mapping 21 peer-reviewed studies that conclude mountaintop removal coal mining contributes to significantly higher rates of birth defects, cancer, and cardiovascular and respiratory diseases among individuals living in the region where it occurs.

Released the 40th anniversary of the Clean Water Act, this report looks at the threats to the clean water protections during the 112th Congress, as well the people who have improved water quality in their communities thanks to this landmark legislation.

A report by Appalachian Voices, Sierra Club – Virginia Chapter and Chesapeake Climate Action Network that analyzes more than a decade of publicly available data to draw the connection between state campaign contributions and corporate gifts from electricity utilities and mining companies in Virginia and the and the poor record of Virginia in advancing energy efficiency and renewable programs compared to other states.

An analysis of negligent water quality reporting by certain Kentucky coal mine operators and the state of Kentucky’s regulatory response to the investigation.

The EPA recently identified 49 coal ash ponds that have a high hazard potential rating, 12 of which are in North Carolina. In addition, Duke and Progress Energy recently tested groundwater surrounding coal ash ponds for contamination. Of the 13 ponds tested, all 13 were found to violate NC groundwater standards. This report examines the need for federal regulation of coal ash and makes recommendations concerning two proposed regulations being considered by the EPA.

An investigation building on the February 2010 report (below) identified 39 more coal combustion waste disposal sites in 21 states where the groundwater or surface water has been contaminated with toxic metals and other pollutants. Added to the 67 cases acknowledged by the EPA, that brings the total to at least 137 sites polluted by coal ash or scrubber sludge.

This report explores 31 coal combustion waste sites that are known to have contaminated groundwater, wetlands, creeks, or rivers in 14 different states. At almost half of the sites, contamination extends off the power plant property at levels that exceed drinking water or surface water quality standards. In addition, 22 of the 31 sites are located in communities with high poverty rates. According to the EPA, residents near coal ash dump sites have a higher risk for cancer as well as damage to the liver, kidney, lungs, and other organs.

Two new studies by Appalachian Voices and NRDC reveal that 1.2 million acres, including 500 mountains, have been demolished by coal companies in Kentucky, West Virginia, Virginia and Tennessee. Over 89% of sites are not currently being used for economic development.

Preliminary Summary Report from Water, Sediment and Fish samples collected at the TVA Ash Spill (May 15, 2009)

On December 22, 2008 a coal ash retention pond at the TVA Kingston Fossil Plant broke, releasing over one billion gallons of toxic coal ash. Preliminary analysis of samples collected near the spill site revealed elevated levels of toxic elements in the water, sediment, and fish tissues from the Emory River.

This assessment finds a number of significant risks to ODEC’s consumer-members associated with the proposed construction of the Cypress Creek facility. Risks range from financial uncertainty to greenhouse gas emissions to the capture and disposal of combustion waste.

This report is a review of the estimated economic impact of the proposed 1500 megawatt (MW) coal fired plant in Surry County, Virginia. The study considers local economic resources, labor force, commuting patterns, and regional industry and finds that money and jobs are expected to flow away from such a large infrastructure project rather than into the community.