A Matter of Self-Preservation

New Farmers and the Hard Path To Land 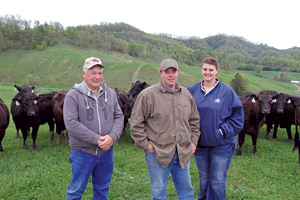 “Going through these transitions, there’s a lot of things you look at, and the main part of it is to preserve [the farm],” says C.W. Pratt, at left, currently in the process of transferring his farm to his son Jason and daughter-in-law Paige. Photo by Matt Grimley

The Pratt family in Atkins, Va., like many, both own and rent land on their 1200-acre cattle farm. Besides small plantings of corn and other crops, Echo Ridge Farm is an angus cow operation, selling off its breeding cattle through seasonal and regional auctions.

C.W. Pratt, though born into a farming family, got his start renting acreage in the ‘60s, eventually buying his own land from his father. Now with white hair, C.W. has slowly transitioned the equipment and cattle to son Jason and his wife Paige.

The process of transition has taken two years so far and is not yet complete. For the sake of financing, avoiding costly taxes and easing the land’s management, Jason says that they want to be careful. The Pratts have heard too many stories about farms ­­­­­— which can be equal parts family and business to their owners and operators — facing disaster through lack of an estate plan.

“It’s awful hard for people to give up that security,” says C.W., who continues to run the farm with his son. “That’s what they’ve worked their whole lifetime for. That’s what protects them.”

“It’s not an easy process,” says Jason about the transition. “Nobody wants to talk about dying.”

That dearth of youth, combined with Appalachia’s already short stock of arable land, is leading many in the region to wonder: Who is going to farm Appalachia?

Andrew Branan, a North Carolina lawyer who specializes in farm transitions, says there is not a shortcut for landless farmers. Appalachia is no different from the rest of the nation in that land remains a commodity bound to economic, legal and technical mechanisms.

That’s why Branan thinks that older landowners, while actively transitioning their land and estate to family members, should consider selling 20-acre tracts to new farmers. It would, at the very least, shake loose opportunities for the incoming generations who often must wait for the chain of inheritance of family land to reach its final link.

As state chair of the Virginia Young Farmers association, Nate Aker knows the challenges for those looking for land. “You’ve really got to network, you’ve really got to make a lot of contacts, because you might partner up with three or four different people before you find the right one to transition through to possibly have a lease-purchase agreement on their farm.”

The rise from nothing can be done. Aker tells about the couple from Kentucky who last year won the National Young Farmer and Rancher Achievement Award from the American Farm Bureau Federation. The family had no history in farming, and the man decided in high school to start cultivating on the school’s plot. He developed such a passion for it that he put out an ad in the paper to lease his own land.

There are lots of good stories out there, but it’s just the bad ones, borne by rumors and press, that get told, he says.

“Farmers are probably the last people who are going to brag and boast about what they’ve done.”

But even for those who’ve created the inroads, land ownership remains a problem. Kevin Toomey and his wife Christina are thus far unable to move past leasing farmland. The couple has worked for the past several years in Candler, N.C., on two plots of one and two-and-a-half acres, growing a diversity of vegetables.

Through Ten Mile Farm, the Toomey’s use farmers markets and community supported agriculture to sell directly to customers. They have the customer base now to expand operations, but the land prices are the only problem. Near the expanding metropolis of Asheville, Kevin Toomey says, development prospects have made the land unsalable to those outside a farming family or without a parent’s paycheck.

The couple has talked with farm creditors, looked at loans and saved up capital, but it’s still not enough. A short time ago, they put a bid on a property, hoping for the opportunity to pitch a lower agricultural price to the land’s 20-year operator. They were upshot by someone who bid $17,500 an acre, twice as much as Toomey and his wife, to not continue the farm, but to instead build a house on it.

“It’s a stiff market for agriculture,” says Toomey, who is thinking about looking outside the region for land. “It’s not a stiff market if you have money.” 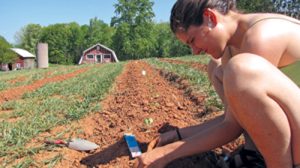 Holly Evans plants young sprouts at
Swan Creek Farm in Hamptonville, N.C. Swan Creek was one of more than a dozen farms that Evans and her boyfriend Randy Buck worked at last year though the World Wide Opportunities for Organic Farmers program. Currently, the couple interns at Spring Creek Farm in Elk Valley, Tenn. Photo by Randy Buck

Money remains a concern for all young farmers, for whom the process is paradoxical: experience is needed to set foot on the land, but land is needed to gain experience.

Via internships, apprenticeships and work-share agreements, many people have found their way into farming. But it all comes down to building relationships with farmers, according to Holly Evans, a beginning farmer herself.

Evans and her boyfriend, Randy Buck, have worked on organic farms for the past couple of years through the World Wide Opportunities on Organic Farms program. They worked in states from Mississippi to Vermont on operations featuring everything from hazelnuts and mushrooms to an agrarian lifestyle in 1700s America. Through their few-week stay last year at Spring Creek Farm in Elk Valley, Tenn., they earned season-long internships this year at the farm with stipends and room-and-board. Spring Creek has given the pair a wealth of knowledge, showing them how to skin rabbits, prune trees, and plan out community supported agriculture shipments and planting schedules. “Adam and Shelby [the owners] really value our opinions and ask us what we think if they’re trying something out,” says Evans.

They hope to own and farm land in the future, but they know it will be a task. “I have no idea how we’re going to pay for it,” says Evans. She says that they’ll save up money in the meantime and probably work off-farm jobs, like many others, in the quest for acreage and full-time agricultural careers.

While this calling depends on the long-term business plan, some have realized that an operator can have a successful farm without owning land, says Kevin Schmidt, coordinator for the Virginia Office of Farmland Preservation and its Farm Link program.

“Some folks will tell you the days of farmers needing to own the land they farm is outdated,” he says. “The idea of leasing land is what a lot of people are suggesting when you’re talking about [up to] 20 thousand an acre for land that is good, but maybe not great land.”

Virginia’s Farm Link, which has run in earnest since 2007, offers an online database for landowners and potential operators as well as a series of farm transition workshops. Though Farm Link programs are found in many states, Virginia is currently the only southeastern state to feature one.

Virginia’s Farm Link is still working to accumulate success stories. Right now, the program has a ten-to-one ratio of farm seekers to landowners, and Schmidt is focusing on gathering the two sides in a room together via workshops and trainings. From there, he’ll work to pair up in person those who have land available and those who want it.

The Farm Link model has inspired others. With funding from North Carolina State University and guidance from a coalition of nonprofits and county extension services, a part-time position is opening for a farmland access service in western North Carolina. The service would connect young people with landowners, and hopefully, by facilitating an online and in-person process towards apprenticeships and leases, the first steps on the soil could lead to more intergenerational land transactions.

“We have so many young people interested in farming [right now],” says Jeanine Davis, associate professor with North Carolina State University’s horticulture department. “We’re going to lose them if they can’t find a way to make a living at it.”

Back in southwest Virginia, on top of a sloping green pasture, C.W. holds out his hand to one of the cattle that has lined up to sniff his truck for feed. With Paige and Jason expecting their first child in August, the Pratts are once again facing a big change, another opportunity for joy that they’ll undoubtedly embrace.