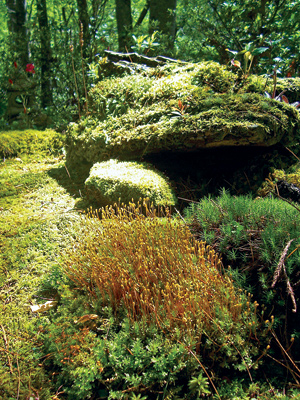 One of the many species of moss in Annie Martin’s yard, plagiomnium-ciliare, displays its yellow sporophytes.

As part of the first plant family to colonize Earth, the soft beds of mosses that now grace mountain streams and woodlands may have shaped our planet’s history.

Primitive mosses, similar to the hundreds of moss species found in Appalachia, might have triggered two cool periods around 455 million years ago, according to a recent study. Published earlier this year in Nature Geoscience, the study suggests that early mosses clinging to prehistoric rocks sped up the weathering of certain minerals from those rocks. The release of these minerals accelerated the pace of carbon sequestration, leading to cooler temperatures that paved the way for further plant and animal evolution.

Even in outer space, mosses are remarkable. A NASA experiment took moss aboard a space shuttle to study its response to the near-absence of gravity. All other plants grew haphazardly, but moss filaments formed a spiral, showing that mosses respond differently to gravity. The lead researcher theorized that spirals are the default growth pattern for moss, but that gravity masks that design on Earth.

To entrepreneur Annie “Mossin’ Annie” Martin, this is further evidence that mosses have extraordinary, borderline magical, characteristics. Martin runs Mountain Moss Enterprises, a small business in Pisgah Forest, N.C., where she rescues mosses from places such as construction sites and grows, sells and installs live mosses for gardens, terrariums and green roofs. Her sunny front yard is a moss demonstration garden, a constantly evolving, textured landscape of greens, yellows and browns, dappled with bursts of orange and pink spores. When she talks about the plant family known as bryophytes, she gets so excited that she jumps up and down in her heeled leather boots.

Algae and bryophytes are the only non-vascular plant families. All other plants are vascular, meaning that they have roots and leaves with an outer coating. Raindrops roll off the leaves and soak through the earth, where the plant uses its roots and stems to suck up water and nutrients.

Mosses and their cousins have no need for roots. Tendrils called rhizoids fasten the plants to surfaces, and permeable leaves allow water and dust particles to feed the plant directly. Though these permeable leaves might seem to suggest vulnerability, mosses are hardy enough to tolerate toxins such as heavy metals, says Martin. She’s harvested mosses from chemical-drenched land beneath power lines, and the worst damage she’s seen is black coloring that is quickly outpaced by new green growth. Although many mosses thrive in deep shade, a variety of species will also flourish in sites with direct sun — places like Martin’s front lawn.

The only ingredient these primitive life forms absolutely require is water.

“When you look at mosses you are looking at not just thousands but millions of plants in an expanse or even in a colony,” she says. “They’re very social, they like to live together. Why? Because it helps keep them moist!”

Mosses reproduce in several ways. The most simple is fragmentation. Sections that break off of one plant can generate wholly new plants, so people with both moss and grass in their yard will spread the moss by mowing over it. 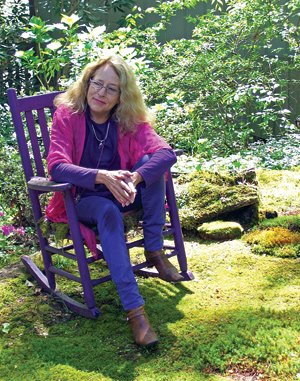 Annie Martin is a self-educated moss entrepreneur driven by her love of bryophytes. Her website is mountainmoss.com.

Female and male moss plants also produce eggs and sperm — the sperm swim through water, and when the egg is fertilized a new plant called a sporophyte appears. These sporophytes go through several life stages, often forming elegant, brightly colored structures with capsules containing one million spores. When the spores are ready, they burst outward at up to 65 miles per hour in a tornado-like vortex ring.

Some bryophytes share a bizarre form of reproduction involving male plants with small cups. The plants generate sperm in these cups, and when the cups overflow with rainwater some of the sperm spill out.

Although some species seem to go through their sporophytic phase at regular seasonal intervals, many species and colonies display no clear patterns. Some turn white for a spell, others become black or gold. This can be a sign of distress, but it can also be part of a healthy lifecycle.

It’s possible to create a conventional-style lawn with moss, Martin says, though she prefers the more elaborate look of a garden. Moss landscapes have a dramatically lower environmental impact than grass lawns since they require no pesticides, herbicides or mowing. And because moss rhizoids grasp the ground so firmly and mosses hold moisture, these primal plants slow erosion. A natural antifreeze chemical and dehydration reflexes mean that mosses don’t just tolerate the cold, they can grow and reproduce in sub-freezing temperatures. To an avid gardener like Martin, that’s a huge advantage.

“You don’t have to give up on gardening in October!” she gleefully exclaims. “All of a sudden, it’s year-round.”