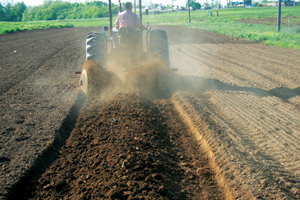 A row of sweet potatoes, planted end-to-end, is covered in several inches of dirt. The nutritious vegetables can be grown with tobacco farming equipment, helping ease the transition to new Appalachian crops. Photo courtesy Tim Coolong and University of Kentucky Cooperative Extension

A summer drive along nearly any Appalachian road reveals scenes of agrarian beauty – cows grazing in the morning mist, hills striped with rows of Christmas trees, and a mix of colorful and weathered barns.

Twenty years ago, the drive would have toured fields and sloping farms dominated by tobacco. Since then, many of the region’s iconic tobacco barns have emptied due to the demise of a federal program and dramatic shifts in the market that favor large growers.

In the late 1990s, as reports warned of tobacco’s imminent decline, some forward-thinking farmers and community leaders organized a response rooted in vegetable and meat production. The resulting success story of local foods, in Appalachia and around the nation, has garnered rightful attention and praise. Farmers markets foster pride in regional agriculture and have provided an economic refuge for some growers. For others, new crops and customers offer a way to weather the changing economy.

In eastern Kentucky, like much of Appalachia, nearly all farmers grew Burley tobacco, says Tim Coolong, University of Kentucky cooperative extension vegetable specialist. Today, however, the vast majority of the state’s tobacco harvest comes from large operations in western Kentucky. In the mountains, much of the land formerly designated for tobacco is now either grazing land for beef cattle or used for hay.

Of those who still grow crops, Coolong says, most farm about half a dozen vegetables and sell them directly to consumers through farmers markets and restaurants. In search of a more large-scale crop, Coolong received a grant in 2009 to study whether sweet potatoes could fill tobacco’s void.

In eastern Kentucky, growing sweet potatoes is relatively simple — the crop requires little to no irrigation or pesticides, and no nitrogen. These hardy vegetables store well, and the same transplanting equipment used for tobacco can also be used for the tubers. Sweet potatoes are also good candidates for organic growers, Coolong says, as long as the farm isn’t prone to wireworms.

The study found that former tobacco fields grow sweet potatoes well, particularly the copper-colored Beauregard variety, but there isn’t enough market demand or storage facilities for large-scale harvests. Currently, Coolong is aware of about 25 sweet potato growers in the area, most of whom incorporate them as part of a diverse vegetable system instead of as a primary crop.

While some tobacco farmers have turned to pasture or livestock, those who are still growing crops are eager to try alternatives. A national producer of hummus, a Middle-Eastern dip made from chickpeas, is expanding its Richmond, Va., processing plant and is encouraging Virginia farmers to try growing the bean. Interested farmers have called Coolong about the legume’s viability in Kentucky’s mountains — he says the question is worth studying, though he thinks farms closer to the processing facility will fare better.

Nontraditional products, such as hanging baskets of mums, are also profitable for some, while high-quality bottomland can support grain, though investments and access to equipment such as corn combines can be a barrier. Federal funding to help farmers purchase hoop houses and other structures that extend the growing season has proven beneficial, with tomatoes and lettuces that thrive in these arrangements selling well on the emerging farm-to-school market. 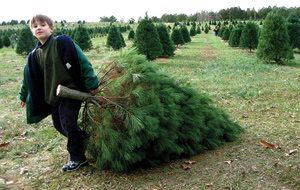 George Sorg hauls a Christmas tree at a farm near Gallatin, Tenn., that is no longer operating. Photo by CJ Sorg

Former tobacco growers aren’t the only Appalachian farmers experimenting with new crops. Adding pumpkins to Christmas tree farms is helping some growers weather a recent downturn in the tree industry.

Jeff Owen, a Christmas tree specialist with North Carolina State University’s cooperative extension, says that over the past several years some growers saw tree prices drop by more than 70 percent, compared to a decade ago.

“If you take a long view of the Christmas tree industry, there’s about a seven-year cycle of ups and downs based on the average time it takes to grow a tree,” Owen says. “The slowness of it being a perennial crop that takes a minimum of six years to grow means you’re always off-sync in your planting.”

According to Owen, the plummet in prices was due to a surplus of trees combined with the rising influence of chain stores that manipulate the market by offering farmers lower prices. Growers began scaling back tree plantings in 2005, he says, so the market might correct itself eventually.

In the meantime, growers are boosting their bottom lines by reaching customers outside of the big stores, and some of those with suitable land are having luck with other crops — primarily pumpkins, but also potatoes, vegetables and hops sold to craft breweries.

Diversifying has worked well for farmers like Sue Bostic of Newport, Va., who runs Joe’s Trees, a 100,000-tree farm named for her father. Bostic is phasing out of the wholesale market and instead reaches some customers through mail-order and the majority through a choose-and-cut operation that entices visitors with hayrides, a kids’ mining sluice and a play area. Bostic has expanded the operation to include wreaths, garlands, pumpkins and gourds. 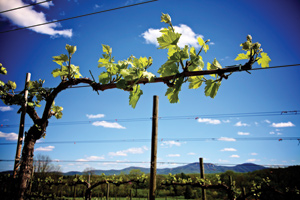 Although Todd Howard farms four small mountain lots and is lauded for co-founding eastern Kentucky’s successful Floyd County Farmers Market, he didn’t set out to be a farmer. Howard had a desk job in the coal and natural gas industries, but around 2006 began to feel unsatisfied.

Over the next several years, what started as a backyard garden grew to nearly an acre. When the company Howard worked for closed in 2010, he spontaneously planted 25 rows of sweet corn, each about 300-feet long. “I just assumed it would sell itself, that with some magical sign people would go get it on their way to the big box store,” he says. The Howards canned more than they had ever dreamed of, he says, and still had excess.

That summer, he learned that the City of Prestonsburg was organizing a meeting for those interested in starting a farmers market; Howard was the only one that showed up for the first meeting, but later that season the market began with three growers and soon gained a loyal following. Vendors increased in 2011, but a poor location and severe drought made for a rough season. Howard considered abandoning the effort, but after meeting other farmers at an agriculture conference he returned inspired.

Community support for the market soared in 2012 — benefactors included a local radio station, a sign company, and a Christian non-profit that formed Appalachian Roots, a citizens coalition that provides fundraising and coordinating assistance for the market. By the end of the season, vendors had more than doubled sales from the previous two years.

This year Howard is excited to see new products added to the market. One first-time vendor will sell bread loaves, and another will offer organic pet treats. On his own farm, Howard is ramping up production of high-demand greens such as kale, and says local growers are shifting their emphasis from corn, beans and tomatoes to less traditional crops.

“Last year it just blew me away that people were so interested in eggplants,” he says. A favorite vegetable in the Howard home, he brought them to market on a whim one day, and a line unexpectedly formed at his stand.

The farmers market exposes consumers to locally grown foods and plays an important role in establishing demand, says Howard, but relatively few growers are able to make a living from that source alone. For Appalachian agriculture to have a stronger impact in rural economies, he says, local food needs to meet people where they usually shop and eat — at grocery stores, schools and institutions such as state parks and hospitals.

Howard hopes stronger ties between growers and mainstream food suppliers will lead to more full-time farmers, boosting local economies. He also suggests that interested customers tell institutions that they want Appalachian-grown options. “Just opening your mouth and asking for change is probably the most effective way to get local food into some of these systems,” he says.