Tracking the Trails of a Reinspired History

Hundreds of miles of driving and recreation trails criss-cross southwest Virginia’s rolling green acres of mountains, stitching together a quilt of gushing streams, hidden and remarkable wildlife, raw coal mines, spirited music and welcoming, resilient towns. The unique history of southwest Virginia is a seasoned patchwork of distinct communities with a shared Appalachian heritage. To experience the dynamic development of this region, here are just a few of southwest Virginia’s many trails. 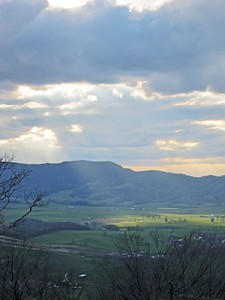 The Heart of Appalachia Bike Route and Scenic Drive begins in Burke’s Garden, and journeys more than 100 miles to Wise County, Va. Photo by Kimber Ray

From Burke’s Garden, a valley community aptly named “God’s Thumbprint,” to the rugged, 400-foot plunge of Guest River Gorge, about 100 miles of back-country and unpaved roads weave through southwest Virginia, ending with a 20-mile bicycle-only trail. Branching off the Heart of Appalachia Route are an additional 40 miles of side trails leading to popular attractions such as the 3-mile loop hiking trail at Pinnacle Natural Area Preserve, which hosts several waterfalls and a 400-foot rock outcrop with a scenic overlook.

The wildly popular 60-mile, multi-use all-terrain vehicle and horseback riding trail in Saint Paul, Va., is the first of many planned trails to be developed on the private lands of coal, timber and gas companies. Jack McClanahan, who has been a member of the Spearhead initiative since it began in 2009, is proud of the effort to show compatibility between industry and recreation. “I am not anti-mining,” he says. “The mining industry has put bread on my table for many years […] we’re taking the natural resources we’re so proud of and nurturing them so others can come here and enjoy this place.” As the first designated ATV trail in the region, the project takes environmental pressure off public and private lands, where illegal riding was widespread, and allows those who are physically unable to hike to enjoy the sights and sounds of these dense woods.

Venture on the Crooked Road’s 333 miles for lively bluegrass jams, the tapping rhythms of foot-stomping crowds, and old-time string bands. Fans travel from across the globe to experience first-hand the homeland of famous voices such as Ralph Stanley and the Carter Family. In addition to more than 60 affiliated venues and festivals throughout southwest Virginia, the road itself also hosts approximately two dozen “wayside exhibits” where travelers can park along the road and tune their radio to that exhibit’s special station. But this isn’t a tour for the seated audience — the best part is the live performances and the chance to meet wonderfully talented musicians.

Lays Hardware Center for the Arts

As the music shifts from a wavering amble to an exuberant pulse, a mix of voices, banjos and fiddles join in with the song of the land, from the quick strides of the cricket orchestra to the deep and ancient hum of the mountains. In Coeburn, Va., the long-time home of the legendary musician Ralph Stanley, jam sessions and performances at Lays Hardware Center regularly attract more than 100 visitors, every one of whom seems eager to step onto the dance floor. For those who are still working on their flat-footing, the two-step is a fun dance that’s so simple it can be learned in just the first three steps of a song. Charlie McConnell, a founder of the music center, says even more people have been coming to the town since the development of nearby trails. “And with music, environmentally it’s friendly, music doesn’t pollute the atmosphere,” says McConnell. He pauses, then adds, “Unless you’re off key a little bit.” 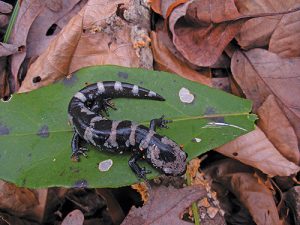 A marbled salamander was discovered in southwest Virginia thanks to the increasing use of phone applications to share hiking trail information and wildlife photos. Photo by Walter Smith

Scattered across southwest Virginia are no less than ten of the state’s 65 innovative birding and wildlife driving trails. Since the project began in 2003, hundreds of thousand of visitors have flocked to the region, eager to catch a bird’s-eye-view of the landscape from the mountains’ scenic vistas and glimpse a rare avian species or three. But many features of the route don’t require binoculars to fully appreciate — each trail is a medley of distinct historical, cultural and environmental attractions. Below are two of the eight sites on Tazewell County’s Mountain Loop Trail, which is one of the state’s birding and wildlife trails.

This hidden valley, tucked into a closed embrace by the surrounding mountains, is undoubtedly the “other side” that folks are referring to when they tell you where the grass is greener. A historic farming district, this incomparable location hosts rolling fields of crops and pastures glowing in brilliant streams of sunlight. Locals tell of how, in the 19th century, George Vanderbilt was struck by the valley’s beauty and tried to buy the land for his estate. When residents refused to sell their titles, Vanderbilt moved his sights to Asheville, where the current estate remains. Only one paved road goes through the town, offering an enchanting 10-mile route for bicyclists or the casual stroller. For a breathtaking view, follow the road up to the Appalachian Trail, which ambles along the valley’s rim.

The stories of southwest Virginia’s cultural roots sprout into a tangible wilderness at this exhibit and living history museum. The more than 500-year-old Native American artifacts on display were discovered on-site, and the pioneer village of log and stone buildings is the result of transporting and re-assembling actual 19th-century structures. Visitors can become part of this historic community by trying their hands at different pioneer skills such as spinning yarn, open-hearth cooking, blacksmithing and, of course, traditional Appalachian music and dancing.