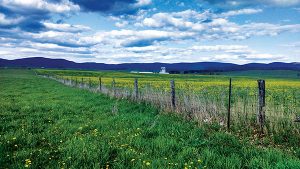 The agricultural community of Burke’s Garden, isolated by the surrounding mountains, occupies the highest valley in Virginia. Photo by Kimber Ray

When a developer from New York told Charlie McConnell, the founder of a music venue in Coeburn, Va., that the best asset of southwest Virginia was “nothing,” McConnell was perplexed. With long, forested ridges fanning out beyond a river teeming with more varieties of aquatic life than anywhere else in the country, and a rich culture of music and crafts deeply rooted in the mountains, “nothing” certainly wasn’t the first word that came to mind for McConnell. The Nature Conservancy has even named the Clinch Valley as one of the last 20 “Great Places” in the world.

“People are really starved to find a place where they can just relax and watch the grass grow, listen to music, or sit outside and watch the sun come up or go down,” the New York developer explained. “It’s the pace of life and the friendly communities. People can come here, and do nothing, and enjoy it.”

That way of life is inseparably connected to the natural environment, according to Aaron Davis, the assistant manager of Southwest Virginia Museum Historical State Park. For more than a decade, many voices from southwest Virginia have advocated for the creation of a Clinch River State Park to help preserve this connection. That idea finally picked up momentum in 2010 with the creation of the Clinch River Valley Initiative, a coalition of stakeholders including citizens, government officials, and environmental and business groups.

Members of the initiative met with state legislators to promote the idea, earning the enthusiastic support of state delegates Terry Kilgore and Ben Chafin who, by April 2014, had convinced the House to include $2.5 million to support the park’s initial funding in the upcoming budget proposal. The final budget is scheduled to be announced at the end of June.

Virginia’s 38th state park would cover nearly 700 acres and include two anchor properties along the Clinch River in Scott and Russell counties, as well as smaller stretches of land in Wise and Tazewell counties. In addition to creating much-needed campsites within an hour’s drive of the river, the completed park will include hiking trails, picnic areas, visitor centers and, of course, access points to the river. Boaters will be able to camp along the river shore’s quiet, remote areas, inaccessible by car.

According to Steve Linderman, land protection program manager with The Nature Conservancy and chair of the Clinch River Valley Initiative’s action group to create the state park, virtually all the land along the river is privately owned. But already, the effort to secure land donations and sale offers along the river has begun. 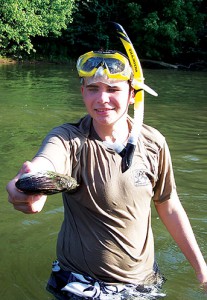 A boy scout handles a Clinch River mussel under the supervision of a state biologist. Until the 1930s, most American buttons were made from mussel shells, but today mussels are the most endangered species family in the country. Photo courtesy of The Clinch Coalition

In fact, much of the land across southwest Virginia is privately owned. Because of this, many species in the area remain undiscovered, according to Walter Smith, a biology professor at the University of Virginia’s College at Wise. Yet with the recent development of regional hiking guides on EveryTrails’ phone application that connect to iNaturalist, an online community for reporting plant and animal observations, knowledge of the area has been growing. Some citizen contributions have even resulted in new insight into the region’s ecology.

The marbled salamander is one such example. A secretive critter, it spends most of its life underground, but emerges to breed in seasonally flooded areas. Its bold silver bands caught the attention of a UVa-Wise student, who submitted its picture online. Naturalists and biologists in the iNaturalist community were surprised — although the species was documented in the surrounding radius of the Clinch River Valley, the area itself had always remained a mysterious hole in the salamander’s territory.

The Clinch River Valley is “ridiculously biodiverse,” Smith says, but also understudied. And, he adds, “no one knows exactly why there’s so much diversity in the region.” One theory is that because the area had no glaciers in the last ice age, its species have had a longer period to evolve. As new hiking trails open — including the Spearhead Trails and the Bluebell Island Trail — and the state park comes closer to reality, visitors will have an abundance of opportunities to help uncover the secrets of the region’s ecology.

“For a long time we’ve been an undiscovered natural place, [because] the general public didn’t grasp the value of our ecosystem here,” says local resident Lou Ann Wallace. Before tourism began to pick up, she says, some locals would ask her, “‘What does anybody want to come here for?’ My response to that is ‘Why wouldn’t anybody want to come here?’”

Marsha and Robert Banner were a little wary when they were first approached two years ago about providing access to the Clinch River from their land, but mostly they felt excitement. With more than a mile of river frontage along their farm, the river had long been a major part of their own family’s activities, including cookouts and swimming, and they were glad to be able to help out their community.

After carefully working through the details — a gated fence surrounding the parking lot, hours prohibiting overnight parking, and an agreement that local police would monitor the property — the deal was set. Local resident Lou Ann Wallace, who has been an influential force in advancing regional ecotourism, even brought the mayor along for good measure.

The Banners donated a tenth of an acre for the creation of the parking lot and expanded river access point. The community development nonprofit Mountain Heritage, Inc., headed by Wallace, oversaw the property before transferring it to the town of Saint Paul. Infrastructure development is not expected to be completed until this summer, but folks have already begun taking advantage of the new opportunity to enjoy the Clinch. Local river outfitter Terri Anne Funk navigates her customers to an old set of iron steps that leads up to the Banner’s donated property. In thanks, Funk offered the Banners free tubing trips, and Marsha Banner was so thankful for that relaxing experience along the river that she purchased her own tubes.

As the Banners watch the Clinch River flow by their property they notice that, even in May, the river is alive with more visitors than they’ve ever seen in the past. The influx of tourists has brought needed jobs to the community, and Robert Banner is optimistic that the river will continue to be a tremendous help to the region. For him, there’s no doubt that opening up access to the river was simply “the right thing to do.”