Signs of Spring Along the Blue Ridge Parkway

I tightened up the laces of my boots in the empty parking lot and hit the trail. As I entered the woods, walking along the old logging road that makes up the first part of the Little Table Rock Mountain Trail, I looked up at a cloudless sky and sensed that springtime was on the verge of awakening.

It was warm and the air was still. I could hear the faint buzzing of insects and a small gray bird eyed me silently from his perch as I walked by. The ground was still muddy from rain the day before and rivulets of water ran across the narrow road.

Little Table Rock Mountain Trail is the longest of three newly designated Stanback Trails along the Blue Ridge Parkway in North Carolina. It is located just a mile up the Parkway from the Heffner Gap Overlook at milepost 325.9, where a second Stanback Trail — the Rose Creek Trail — begins directly across the street. Both of these footpaths are within the boundaries of the Pisgah Game Lands near Spruce Pine, while the two-mile loop of Saddle Mountain Trail runs through the Mitchell River Game Lands near the community of Lowgap, N.C. and the Virginia state line.

The Stanback Trails were established in 2013 by the state of North Carolina in honor of Fred and Alice Stanback, who for many years have helped to conserve land and protect the natural resources of The Old North State. Funding for the construction of the trail and trailhead markers was provided by a partnership between the state government, non-governmental agencies such as the Southern Appalachian Highlands Conservancy, and private citizens such as Fred and Alice Stanback, who also helped protect the 544 acres that surround the Little Table Rock Mountain Trail. 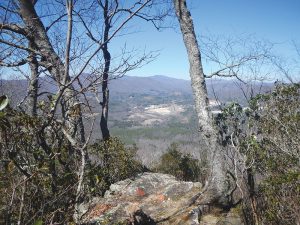 On a clear day, you can see the entire North Toe River Valley from the summit of Little Table Rock Mountain. Photo by Dac Collins.

Feeling warm and energetic, I kept up a brisk pace on the overgrown road as it ascended gently around the southeastern side of Little Table Rock Mountain. I came to where the road passes over a culvert and, instead of crossing the creek, I hopped down into it and dipped my head in the cold water. Invigorated, I aimed at the clear blue sky and spat out a mouthful of creekwater through pursed lips. A cloud of mist lingered in the air for a moment before coming back down.

Shortly after crossing the small creek, which ran down into a cove below before it was hidden by a veil of rhododendron, I came to where the route takes a sharp left and leaves the road. This is where the hiking really begins. There are hardly any switchbacks as the trail climbs steadily through a hardwood forest towards a crest of the Blue Ridge Mountains, where a few isolated pine trees compete for sunlight amongst a dense woodland of towering oaks.

I was looking down at my feet while plodding uphill when I almost stepped in a pile of chalky bobcat droppings. Strangely excited by the sight, I wondered where the wary cat could be hiding.

Upon reaching the ridge line, it seems like the climb is over, but the end of the trail is roughly three-quarters of a mile further. The steepest part of the hike is the last few hundred yards leading up to the forested summit of Little Table Rock Mountain, which is situated on the Eastern Continental Divide at an elevation of 4,080 feet.

Once there, I stood on a rocky outcrop and looked out over the developed North Toe River valley to the northwest. The first thing that caught my eye was one of the quarries — most likely a quartz or feldspar mine — that put the town of Spruce Pine on the map.

Facing the southeast rewarded me with a splendid view of untouched mountains. I could see Table Rock Mountain in the distance, and in the foreground I noticed a ribbon of asphalt winding through the naked canopy of trees: the Blue Ridge Parkway. One car passed by, then another, and I could not help but think about the drivers enjoying the scenery through their windshields, oblivious that creatures like the bobcat and myself were high up on the mountaintops basking in the sunshine.

Difficulty: Moderate
Distance: 4.2 miles, out and back
Directions: From milepost 291 on the Blue Ridge Parkway, head south to Bear Den Mountain Rd.; turn right and continue straight onto Humpback Mountain Rd.; take another right on Whiterock Rd. and follow the sign that reads “Access Road to N.C. Wildlife Game Lands” to reach the parking area.
Caution: The sign is hard to spot from Whiterock Rd. When you come to a three-way fork in the road, take the gravel driveway farthest to the left.
All three trails pass through N.C. Game Lands, so a blaze-orange garment is recommended during hunting seasons from September to February and April to mid-May.
For more information, visit: appalachian.org/stanbacktrails