Appalachian State University, partnered with a French university, will be the sole representative of Appalachia’s green ingenuity in the third European Solar Decathlon. Kicking off June 28 in Versailles, France, the competition will pit 20 energy-independent houses built by collegiate teams against each other in a sustainable development showdown.

In 2011, Appalachian State, based in Boone, N.C., won the People’s Choice Award in the U.S. Solar Decathlon. This year’s team has tried to improve upon the best attributes of the last project for this year’s competition. 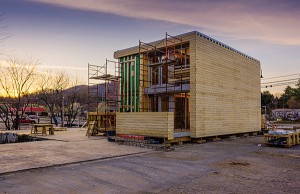 The Appalachian team has dubbed their latest solar-powered home “Maison Reciprocity,” which is, at press time, being ferried across the Atlantic in six separate modules. These pieces will be reconstructed in the l’Orangerie gardens near the Palace of Versailles. Until then, the team is finalizing drawings, writing a comprehensive project manual and creating an interactive iPad application to complement the building.

Appalachian has partnered once again with the Université d’Angers in France to form Team Réciprocité, or “Team REC,” as they call themselves stateside. This is the most recent collaborative project between the two institutions, which have maintained an academic relationship for more than thirty years. After nearly two years of intense planning, fundraising and construction, the students of Team REC feel confident about their entry in this year’s competition.

“We are very lucky to have such a well-rounded and comprehensive [Appropriate Technology and Building Sciences] program here at App State,” says Mark Bridges, Appalachian Solar Decathlon communications manager.

“It makes the whole process so much easier when everyone speaks the same lingo and can collaborate creatively to make an airtight design.”

With the exception of a few faculty supervisors and consultants, Team REC is entirely student-run and managed.Twelve student officers oversee everything from construction and architecture to public relations and sponsorships.

In order to thoroughly calculate their carbon footprint, Team REC researched “cradle to the grave” life-cycle assessments for nearly every building material and technology they used. This meant looking at extraction and refining processes of raw materials, manufacturing emissions and even the mpg-rating of vehicles involved in transportation. The result? An affordable, high-quality and durable home with a tiny carbon footprint. 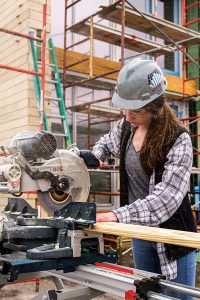 The Solar Decathlon is entirely student-driven, from design and construction to securing sponsorships. Photo by Dudley Carter

Maison Reciprocity is based on an urban, multi-level row house model. The first floor is reserved for commercial activities, the second and third floors are duplex family homes and the fourth level is a rooftop terrace under a renewable energy canopy. To meet the height regulations set forth by the Solar Decathlon however, the building being presented in Versailles will include only two floors.

Inspired by Austria’s 2013 Solar Decathlon team, Team REC used continuous insulation throughout the building to create an “Urban Shell.” “By using cross-laminated timbers to support the structural walls, insulation is uninterrupted by thermal bridges such as studs, joists or rafters,” says Chuck Perry, general contractor for Team REC. The use of these cross-laminated timbers in no way hinders the overall strength of the building, which is built to withstand 85 mph hurricane winds.

This, in conjunction with using a two-layer roof insulator of polyiso-foam and mineral wool, greatly reduces any unwanted heat transfer to the inside of the house. Heat transference both in and out of windows is also minimized through the use of Eastman Chemical Company’s Heat Mirror® insulating glass. This relatively new technology uses lightweight chemical films to allow the glass panes to insulate more efficiently. The 99.5 percent filtration of harmful UV rays is an added bonus.

Maison Reciprocity features a renewable energy canopy called the “Living Brise-Soleil,” French for sun-visor, where the home’s photovoltaic and solar-thermal arrays are attached. The canopy provides all of the building’s electricity and heated water with kilowatts to spare. The canopy will also sport a living wall of vegetation beneath the arrays to promote passive cooling of the photovoltaics and the building itself.

At the heart of the design is the “Container for High-performance Operation, Recirculation and Distribution,” or CHORD, module. This central module houses all of the building’s electrical, mechanical and plumbing components for easy access and servicing.

“Our target market for this design is downtown Winston-Salem,” Bridges says. “Elegantly simple and functional, we wanted this build to mimic the community-oriented row houses of the 1960s, but with a much stronger emphasis on energy efficiency.” The design could also provide affordable and sustainable housing in some of Europe’s more overcrowded cities, according to François Thibault, Faculty Director at the Université d’Angers.

The biennial Solar Decathlon in Europe is modeled on a competition of the same name started by the U.S. Department of Energy in 2002. Both events offer the opportunity for students and experts to share their knowledge and research on renewable energy and green architecture.

The objective of the two Solar Decathlons is to design and build a solar home that is energy independent and economically prudent. The decision to hold this year’s competition in Versailles — home of the Sun King, Louis XIV — is ironically appropriate.

A panel of international experts will judge each team’s solar home. Teams can earn 100 points in ten individual categories including architecture, engineering, energy balance and affordability.

The competing solar homes will be open for public tours during the decathlon and anyone may submit a vote for the People’s Choice Award. The nine-day competition will culminate on July 6 when the official winners are announced. “When you’ve worked as hard as we have on something like this, you don’t get nervous,” Bridges says. “You get really excited.”