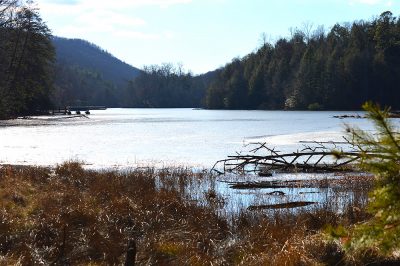 Tucked into the southwest corner of Kingsport, Tenn., is the state’s largest city park: Bays Mountain Park and Planetarium.


Its sprawling 3,500 acres include a 44-acre lake, a planetarium, a nature center, animal habitats, an adventure ropes course, a farmstead museum and 40 miles of hiking and mountain biking trails.

The network of trails allows hikers of all abilities to design an outing to suit them. Two of the most popular hikes are the Lakeside Trail and the Fire Tower Trail. 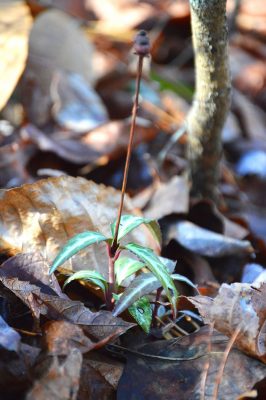 A spotted wintergreen with berries pokes out of the leaf litter. Photo by Lorelei Goff

In early January, I combined several trails to reach the fire tower. Beginning at the back doors of the nature center, I went to the left on Lakeside Trail and walked southwest across the dam.

The dam was completed in 1916 and raised another six feet in 1917, creating the 44-acre lake that serves as a wildlife habitat and an outdoor classroom. It served as the municipal water supply for the City of Kingsport until 1944. Much of the stone used to construct the dam was quarried from Bays Mountain.

Just past the junction of Lakeside and Pine trails, a large tree gnawed halfway through marks the first evidence of the park’s resident beavers.

Crows call from across the lake as I pass a lone mountain laurel. Ferns and holly dot the trailside interspersed with occasional patches of galax, partridge berry and spotted wintergreen. The faded brown remnants of wildflowers, long since gone to seed, whisper a promise of new delights to come with spring.

I pass the first of many benches along the trail before coming to a floating bridge that crosses a jutting finger of the lake. Stone steps here lead to the Orchid Trail above.

Soon after crossing the floating bridge, the trail begins to roll and curve. Bright green mosses brighten the forest floor. 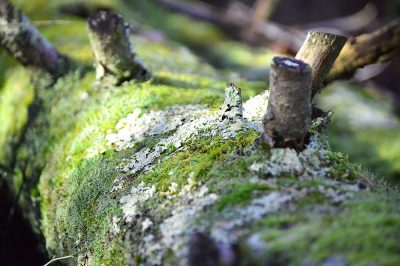 Lichen and moss provide a splash of green in the winter forest. Photo by Lorelei Goff

Nearing the top of the hill, I enjoy a view of the lake while a woodpecker punctuates the rustling of dead leaves in the canopy.

The trail descends, snaking back toward the sound of running water rising from a beaver pond and dam. There’s another above it to the left. A long wooden walkway takes me across the lower pond.

There are a variety of lichen and mushrooms along this trail. Even in winter, life abounds and amazing sights wait for those who will venture out to see them.

A little further on, I turn left onto Hemlock Trail, walking away from the lake toward the fire tower. The forest floor here is strewn with pine trees in various stages of decay, victims of a pine bark beetle infestation during the late 1990s and early 2000s.

The Lake Road Trail crosses Hemlock and the beginning of the Fire Tower Trail straight ahead marks a strenuous 0.6-mile climb to the tower. 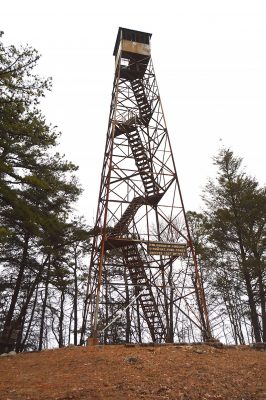 Hikers willing to climb the 1937 fire tower are greeted with an expansive view that extends into four states on a clear day. Photo by Lorelei Goff

The tower was built in 1937 by the Civilian Conservation Corps, a part of President Franklin D. Roosevelt’s New Deal plan to use environmental projects to provide work relief during the Great Depression. The corps built 98 fire towers in Tennessee alone between 1933 and 1941.

According to Park Manager Rob Cole, the tower is nearly 100 feet high and sits at an elevation of about 2,600 feet, offering a 360-degree view. On a clear day, hikers brave enough to climb to the top of its wood and steel staircase can see parts of Kentucky, Virginia, North Carolina and Tennessee.

Returning down Fire Tower Trail, I took Hemlock and made a left onto Lakeside, then followed the Holly Trail after passing another beaver dam and pond. Eventually a wooden walkway widens into an observation deck over a wetlands area, offering a beautiful view of the lake and wildlife. 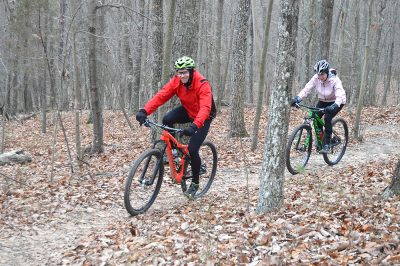 Passing Fern Trail on the left, which leads to Big Oak and Chinquapin, the Holly Trail rounds the lake and returns to the nature center.

Another option from the tower is to take Chinquapin Trail to the left at the lower part of Fire Tower Trail to complete a roughly five-mile loop connecting with Big Oak and Fern trails back to the nature center.

Chinquapin is designed for a mountain bike experience, with sharper curves and more frequent changes in elevation.

Once back at the nature center, there’s plenty more to do. Check out baysmountain.com to see all this gem of a park has to offer.

Difficulty: Lakeside is easy. Chinquapin is easy to moderate. Fire Tower is strenuous.

Directions: Directions to the park from various locations can be found here: baysmountain.com/plan-your-visit/directions. From I-26, take Exit 3. Turn onto Reservoir Road for approximately 3 miles. Turn onto Bays Mountain Road and the park entrance is on the left.

Park Features: The park offers 40 miles of hiking and mountain biking trails, a nature center, animal habitats, a planetarium, an adventure ropes course with a zipline and a farmstead museum. Visit baysmountain.com for more info about the park and educational programs.

Cost: Entrance fee of $5 per vehicle, except for members. Some fees for various programs.