Although visitors are unlikely to stumble upon Saint Paul, Va., by chance, those who do might be surprised to learn that this small, rural town hosts some of the most novel trails in the country. Located along the crystal-clear waters of the Clinch River in Russell and Wise Counties, Saint Paul boasts the most publicly accessible riverfront land of all its neighboring southwest Virginia communities. 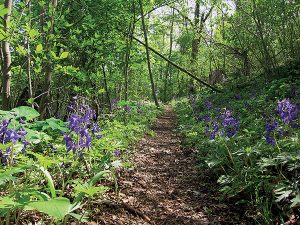 Newly arriving settlers to southwest Virginia during the 18th century used Cliff Trail, which during the spring is covered in Delphinium tricorne, a flowering plant commonly known as dwarf larkspur. Photo by Kimber Ray

Long considered a hidden wonder of Appalachia by environmentalists and wayfaring travelers, the Clinch River is regarded by The Nature Conservancy as the number one hotspot in the United States for endangered aquatic species, including 17 varieties of federally endangered mussels. This distinction inspired a shared vision among community members and The Nature Conservancy: a network of hiking and biking trails that follow the sweeping curves of the river.

Over the past decade, this vision has evolved into an eclectic assortment of connecting trails that, for approximately nine miles, lead travelers past freshwater and hardwood forests, isolated wetlands, fertile floodplains, bald ridgetops and even the downtown streets of Saint Paul itself, suggesting that residents’ fondness for diversity extends even beyond the banks of the river.

To identify this profusion of natural wealth and navigate these winding trails, smartphone users can download the EveryTrail phone application and check out three different interpretative trail guides for the area: Bluebell Island Trail, Sugar Hill Loop and Riverside Trail. The guides were created by the Southwest Virginia Citizen Science Initiative, a student-led community effort at the University of Virginia’s College at Wise.

According to Walter Smith, a biology professor at UVA-Wise and advisor for the initiative, it was only in the past two or three years that information on the area’s natural features began to be substantially documented. “People weren’t able to figure out where to go because when you asked, the directions could be ‘Oh, the trail head is out by where Jen used to live.’ There’s been a lot of stuff here for a long time, but it’s all been local.” 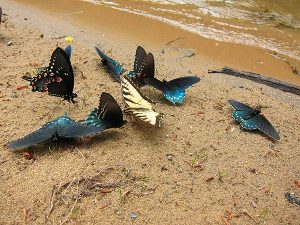 The yellow-winged Eastern Tiger Swallowtail and the orange-spotted Spicebrush Swallowtail are sipping nutrients from the mud in a process known as “puddling.” Photo by Kimber Ray

Now, hikers can follow their GPS to trailheads, and select map pushpins to learn about the area’s storied history of geology, ecology and coal. The newest addition to this network of trails, and a great starting point to explore all three paths, is the tremendously popular Bluebell Island Trail, which opened in summer 2013. The mile-long route travels along the Clinch River and its narrow floodplain, where rising water creates important habitats, including isolated pools of water and even washed-up debris. To a freshwater mussel, an old, half-submerged tire may seem like the perfect new home.

Lou Ann Wallace, a local leader in a variety of community and environmental initiatives, helped coordinate the creation of the Bluebell Trail through this sensitive natural area. Although she had grown up in the region, she had never explored this portion of the river, and was thrilled to discover what had long been a tucked away community treasure. “As a young girl, we always knew there was a Bluebell Island, but I didn’t know where it was or why they called it that,” Wallace says. “Now you can see the island, and see why they called it that.”

In the early blush of spring, Virginia bluebells completely cloak entire sections of the floodplain. The full splendor of the trail’s namesake fades by late April, but the mountain remains draped in color by plants such as the green-headed coneflower — a bright yellow bloom that graces the floodplains of southwest Virginia until early fall — and a variety of summer berries. Follow the trail though St. Paul’s historic downtown, and then onto the Sugar Hill Loop trail. In mid-summer, the watchful observer may note some young fledglings just starting to grow comfortable with their wings as they feed on the mountain berries.

The Sugar Hill Loop Trail soon branches off to the Riverside Trail, a relatively flat path that follows the river. Butterflies seem to enjoy the river too, sometimes gathering together to rest on its shores. If hikers can manage to part with the river, a steep climb up the grassy bald leads to panoramic mountain views and a 9-hole disc golf course.

Just a short walk further is Cliff Trail, a restored path that marks the trek of early settlers through the region. Travelers can take this trail back down the mountain, retrace the Riverside Trail, or complete the Sugar Hill Loop. Each path down, as for those up, is a pleasant surprise amongst the diversity of the Clinch River Valley.