It’s mating season in Appalachia, and the region’s deciduous forests are humming with life. Birdsongs may be heard by day, but by night the Eastern gray treefrogs have hopped out of the branches and flocked to nearby ponds, where they can be heard singing their melodic love songs in hopes of attracting a partner. 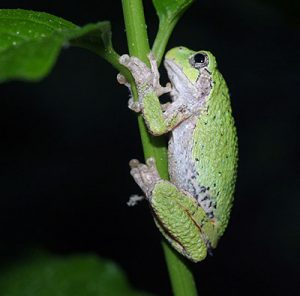 The Eastern gray treefrog looks physically similar to the Cope’s treefrog. They can only be differtiated by their mating calls. Listen to the video below. Photo by Robert A. Coggeshall (Kiowa)

Once the mating is over, the females will search for a shallow, calm place to lay their jelly-encased eggs, which will hatch in four to five days, then develop from tadpoles to froglets in about two months. Female gray treefrogs will lay up to 2,000 eggs at a time in clusters of 20. After a night of mating in late spring, the landscape is littered with frog egg clusters in swamps, ponds, standing water in tire ruts and even swimming pools.

This species of treefrog, the Hyla versicolor, commonly known as the gray treefrog, has a far-reaching range along the East Coast, stretching from Manitoba in the northwest to Florida in the south. Although some amphibian populations in Appalachia are struggling, such as the Northern pygmy salamander, the gray treefrog is currently thriving. There may be a few of these creatures nestled in the damp shade of your backyard, but often the gray treefrog goes unnoticed by humans. This is because the gray treefrog is nocturnal and can camouflage with its surroundings in seconds. 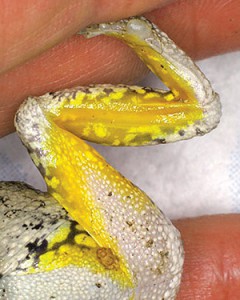 The Cope’s treefrog and the Eastern gray tree frog both have yellow patches on the underside of their hind legs. Photo by Patrick Coin

Gray treefrogs are typically about two inches long and can be identified by their slightly warty skin, their large, sticky toe pads for tree climbing, and most distinctively, the bright yellow-to-orange patch under their thighs that is believed to scare off predators. A close sibling to the gray treefrog is the Hyla chrysoscelis, or Cope’s gray treefrog, which is almost completely identical to the Eastern gray treefrog. The species are thought to interbreed in some areas, but the only way to tell the two apart is by their mating calls. The gray treefrog’s call tends to be more songlike than that of the Cope’s treefrog, which has a stronger tinge of croaking to it.

The sounds of the season occur from April to August, and in the winter these creatures are able to partially freeze for hibernation. Their heartbeat and breathing stop completely as they rest under dead leaves or a rock on the forest floor. Gray treefrogs are able to do this because their bodies contain large amounts of a chemical called glycerol, which is transformed into glucose and acts as an antifreeze to prevent ice crystals from forming in the cells and keep body fluids from freezing solid. When the temperature warms up, the frogs thaw out and leap back into the trees.

Once in the trees, these amphibians are the acrobats of the forest, springing and vaulting from tree to tree in search of a nice meal. Usually a juicy beetle, moth or cricket will do the trick. These creatures spend more than 90 percent of the year in tree branches, with the exception of mating season. The best way to catch a glimpse may be to sit outside on a nice, warm evening and listen closely to the teeming nightlife of the trees.