The Value of Running Water 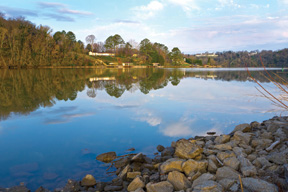 The Tennessee River flows by a neighborhood in Knoxville, Tenn. Istockphoto: Melinda Fawver. A kayaker tours the Upper Chattooga in January 2007

Appalachia’s signature streams and rivers braid together the region’s hills, hollows and pastures, offering fishing, recreation and transportation in addition to the planet’s most vital liquid.

Rivers are so integrated into daily life that some people cross a bridge every day without truly seeing the waterway beneath it. But that doesn’t mean the river isn’t there, offering perches to herons behind small farms, making subtle commentaries about the surrounding residents based on how much litter lines the riverbanks, and influencing everything from the location and shape of a town to the businesses that set up shop nearby.

The Tennessee River, the largest tributary of the Ohio River, shaped the birth of Chattanooga, Tenn., a city that grew out of a riverfront trading outpost. When Chattanooga looked to revitalize its downtown in the early ’80s, reconnecting with the river was the goal. “This is how we started and began as a city hundreds of years ago, so it made sense to get back to the river,” says Jim Williamson, vice president of planning and development for River City Company, a private nonprofit founded to help the city and county capitalize on the riverfront.

Chattanooga’s waterfront boasts entertainment venues, an aquarium and a network of parks that highlight local history. An old bridge was redeveloped as a pedestrian walkway, and the current Tennessee Riverwalk path spans 13 miles.

Williamson says that the anecdotal evidence of bricks-and-mortar investment dollars is huge — and Volkswagen alluded to the city’s downtown as a reason for building a $1 billion facility nearby. This spring, economic development and tourism officials from Huntington, W.Va., visited the city’s river corridor to take notes.

In Chattanooga, fishing piers and the opportunity to rent paddle boards attract visitors, as does the nation’s second-largest rowing regatta. “You encourage more activity by having a clean river,” Williamson says.

Along the French Broad and Swannanoa rivers, the city of Asheville, N.C., is also making use of its water access. Scott Hamilton, president of Advantage West, Western North Carolina’s regional economic development group, says every sector of the economy is affected by waterways, either through the use of low-cost hydroelectric power or because the amenities of a waterway have added to quality of place.

This year, both Sierra Nevada Brewing Co. and New Belgium Brewing Co., the nation’s second and third largest craft brewers, announced plans to build facilities on the banks of the French Broad citing the area’s high-quality municipal water. Together, the breweries will add about 240 jobs.

The value of clean water isn’t limited to urban centers. In recent years, North Carolina’s famed Nantahala River has drawn over 500,000 recreation enthusiasts annually. A survey conducted by Western Carolina University in 2009 showed that whitewater recreation on the Nantahala contributed $85.4 million and 1,060 jobs to the local economy.

Ecotourism might be a big draw, but Kevin Colburn, national stewardship director for paddling group American Whitewater, says that recreation is typically a secondary purpose of Eastern dams. On the Nantahala, Duke Power’s 98.5 megawatt hydroelectric facility is the top priority and the rafting industry is considered after that. And on North Carolina’s Cheoah River, which was completely dewatered for 77 years, dam release negotiations centered around downstream ecological benefits. When releases began in 2005, the forest service provided commercial boating permits, fostering yet another opportunity for the rafting industry and a river’s-eye view of Appalachia.

From flashy headwater streams in the mountains to steady flows through stately valleys, the region’s rivers supply the people with everything from trout and tourism to transportation and energy. Running water is always rewriting its story, but some themes are constant.

A Tale of Three Rivers

Internationally known for its narrow gorge and wild whitewater, the flow of West Virginia’s Gauley River is governed by the Summersville Dam.

Though the dam currently controls a hydroelectric project capable of generating 80 megawatts of electricity per hour and a whitewater boating experience that draws an average of more than 150,000 visitors per year, it was built in the 1960s for a much more mundane purpose — flood control. The Army Corps says the dam paid for itself in less than eight years by preventing $67 million in flood damages.

In the mid-eighties, Congress made recreation an official goal of the Summersville Dam, providing a fixed number of dam releases in the fall and marking the first time that a river was congressionally recognized for whitewater boating. The timing of the fall boating season is based on the need to lower Summersville Lake, the reservoir above the dam, to make room for winter and spring precipitation. In 1988, the Gauley River National Recreation Area was established, protecting 25 of the 107 miles between the Summersville Dam and the Gauley’s confluence with the New River.

A hydroelectric plant was added to the Summersville Dam in 2001, garnering praise from proponents of low-impact hydropower — projects that have a minimal effect on the rivers they occupy — because the plant capitalized on an existing dam.

Despite all the Gauley River contributes to the state, it also appeared on watchdog group American Rivers’ annual 10 Most Endangered Rivers list in 2010 due to contamination from mountaintop removal coal mining, particularly in the Twentymile and Peters Creek watersheds. What happens along the Gauley affects the state’s largest cities — the Gauley and New rivers converge to become the Kanawha, which provides municipal water to Charleston and Huntington.

The Coal River and its chief tributaries, the Big and Little Coal Rivers, snake through the heart of southern West Virginia and are emblematic of both the region’s beauty and the consequences of dependence on the river’s namesake.

Coal River has been a utilitarian artery since the 1800s, when seams of coal mined from its banks were used as a replacement for whale oil. In those days, the river was managed by a lock and dam system to transport timber and coal; it also powered small mills that produced textiles, flour and lumber. Eventually, railways replaced water as the primary mode of transportation.

More recently, the Coal River watershed has become a default dumping ground for mine and timber waste. Twenty-five percent of the river’s watershed is either permitted for surface mining or has already been surface mined. Pollution from these mines has earned the river a place on the endangered rivers list twice, including in 2012. This time, however, American Rivers said that the river basin was listed because it is at a “decision point” where rules regarding surface mines will have a profound affect on its future.

Cleanup efforts in the Coal River watershed have cost millions of dollars. A $20 million sewer project near St. Albans, a town at the confluence of the Coal and Kanawha rivers, was secured by the nonprofit Coal River Group to help eliminate fecal coliform bacteria. And a project directed by the state Department of Environmental Protection is building dozens of partial dams out of boulders to create narrow channels and deep pools that will help scour sediment from the river bottom. 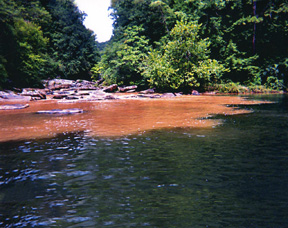 The smell and sight of Stekoa Creek entering the Chattooga River is hard to miss — water testing by conservation groups has helped pinpoint parts of a nearby town’s sewage system most in need of repair. Photo courtesy of Chattooga Conservancy

From its headwaters in the mountains near Cashiers, N.C., until it joins the Tugaloo River, the Chattooga runs unfettered through three states. The 57 miles of alternately tranquil and turbulent water were declared a National Wild and Scenic River in 1974 and are crossed by just four bridges.

A study by North Carolina State University, American Rivers and the National Park Service found that in 2002 boating generated $2.6 million for the six-county area surrounding the Wild and Scenic portion of the river — and the overall regional economic impact of Chattooga boating was estimated at $5.8 million.

The river’s popularity has also led to strife. When the Forest Service issued the first management plan in 1976, approximately 20 miles of the river’s upper reaches were declared off-limits to paddlers, making the Upper Chattooga the only Wild and Scenic river in the nation with a boating ban.

When the the management plan was up for revision in the late ‘90s, national paddling organization American Whitewater lobbied against the boating ban, and the argument continues. Several groups, including national fishing organization Trout Unlimited, contend that the Upper Chattooga offers foot travelers a rare reprieve from the presence of boaters, while American Whitewater maintains that decades of preferential treatment have given anglers a “perceived right” to a river that should be equally accessible to all types of wilderness enthusiasts. Appeals regarding the disputed stretch are ongoing.

At the same time, pollution from Stekoa Creek, which joins the river on section four, has scarred an otherwise healthy river for decades. In fact, the area downstream from the creek’s mouth was almost excluded from the Wild and Scenic zone for that reason, says Buzz Williams, program assistant at the Chattooga Conservancy, a local environmental group. He cites contamination from industrial agriculture and a leaky, 60-year-old sewage system in the nearby town of Clayton as the chief problems.

Over the past several years, however, a partnership between area nonprofits such as the Chattooga Conservancy and the local government to clean up the creek has made progress. The partnership aims to create a stream buffer zone and institute fiscally smart, environmentally strategic upgrades to Clayton’s sewage lines — two major repairs are already complete. And a decrease in the the amount of pollution Stekoa Creek dumps into the river is one thing that will please all river recreationists.