Showing Off Your Mussels: Powell River Restocks Declining Populations and other shorts 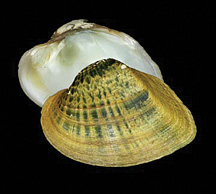 The population of the snuffbox mussel, in terms of range and numbers, appears to have declined by at least 90 percent. Photo by G. Thomas Watters, Ohio State University

This fall, more than 7,000 juvenile mussels were released into the Powell River, the largest number of endangered mussels planted in the history of the river’s restoration project. The release was coordinated through a partnership between Virginia Tech, Lincoln Memorial University, the Tennessee Wildlife Resources Agency, and the U.S. Fish and Wildlife Service.

6,086 oyster mussels, 1,000 combshell mussels and 27 snuffbox mussels were released on river sites near the Powell River Brooks Bridge on Tennessee State Route 63. All three species are listed as federally endangered.

Mussel populations have declined significantly in rivers such as the Powell, prompting restorations efforts. Because mussels help to clean up polluted rivers and rebuild river ecology, these bivalves are seen as essential to such projects.

Mussels are also sensitive to water pollution and indicate a river’s level of health. An adult mussel can filter 10 to 50 gallons of water a day.

The Powell River is home to 13 mussel species listed as federally endangered and has the second-highest concentration of rare and endangered mussels in the nation. Only the neighboring Clinch River contains more of the endangered bivalves.

In November, health investigators found elevated lead levels in soil samples from downtown Chattanooga neighborhoods. The discovery came as state and federal regulators were removing contaminated soil found earlier in the Southside neighborhood. Of the more than 80 properties sampled, 52 were found to contain lead in amounts higher than the safety cutoff of 400 parts per million. A meeting of the city’s Housing and Public Safety Committee has been called to keep city leaders and residents fully informed of progress and any potential hazards. The meeting will be set either Dec. 11 or 18.

In 2012, the Tennessee Department of Environment and Conservation wrote new rules for fracking and solicited public feedback on proposed natural gas drilling regulations. But the state’s NewsChannel 5 team found that state worker Michael Burton wrote derisive notes on some emailed comments that expressed environmental concerns. One comment was labeled “stupid” and another said “No No No hey hey goodbye.” When “NewsChannel 5 Investigates” asked Burton whether TDEC has a culture that discounts environmentalists, he said it did not. TDEC issued a statement saying it values public comment and that it spoke to Burton about his actions, but did not formally discipline him.

Kentucky’s Sand Lick Fork area, a tributary of the Red River, might be receiving some additional care. Daniel Boone National Forest is beginning a potential watershed restoration project to improve water quality and reduce soil loss. The Sand Lick Fork area is adjacent to Natural Bridge State Park in the Red River Gorge, and is a popular location off-road-vehicle location even though using recreational vehicles is illegal on many of the roads and trails.

The Forest Service’s proposal includes cleaning up abandoned oil infrastructure such as wells and pipes, potentially changing the status of the area’s 8.4 miles of official roads and 22 miles of unauthorized and abandoned roads, and restoring 2.5 miles of Sand Lick Fork and its floodplain.