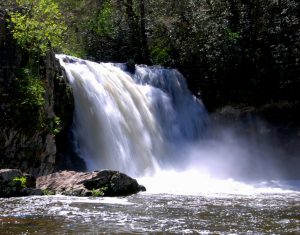 Don’t be fooled by Abrams Falls’ serene surroundings-this pretty cascade features powerful water, and the pool at its base has a reputation for an undertow. Photo by Jenny Pansing

Located in the Cades Cove area of the Great Smoky Mountains National Park in Tennessee, the trail, creek and falls are named after a historic leader of the Cherokee Nation, Chief Abram; a short side trail leads to Elijah Oliver’s house, the first settler of Cades Cove circa 1818.

It has a reputation in the world of adventure as well, earning a spot on Backpacker Magazine’s list of the 10 most dangerous hikes in the country. Of course, if you are a local like me, and you like to hike the trail for its moderate footpath along the serene Abrams Creek — replete with wild river otter and fly-fishing aplenty — you may find yourself scratching your head wondering what wild encounter led the good people at Backpacker Magazine to put the trail on their list of perilous paths.

Maybe it is the strong storm waters that often surge over the nearly 20-foot falls, the same waters that took the life of 19-year-old William Diefenbach in 1993. He was swept downstream and drowned trying to ford Newt Prong. Maybe it is the countless injuries that occur from the young and the bold attempting to jump off the falls’ slippery perch, not noticing the shelf of rock just below the surface at the base. Or the copperheads and moccasins that like to perch in the clefts of the basins.

Maybe, but all in all, Abrams Falls is one of the most pristine and beautiful hikes in the Smokies with one of the most impressive watering holes you will ever see. Of course, the Great Smoky Mountain National Park encourages those who visit to avoid swimming for aforementioned reasons. Dangerous? Maybe, if you’re the kind of person who attracts danger. Beautiful? Most certainly. Worth a visit? Most definitely. 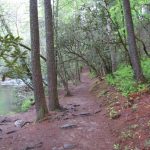 To the falls and back, the trail traverses five miles, much of it creekside, providing the sounds of mountain water like a constant symphony. Along the way, there are a bevy of places to stop for a picnic or to just step off the trail and search for salamanders. The watering hole at the end of the 2.5-mile trek enjoys the constant spray of Abrams Falls. Named after Chief Oskuah (later changed to Abram) of the Cherokee Nation, here the strength of these great people who roamed these free and sacred lands is preserved.

The drive to the trailhead brings you through the historic Cades Cove Loop with wildlife grazing in open valley fields, where deer roam like cattle and bear and other wildlife are commonly sighted. It is a place stuck in a slow and steady time in our nation’s history, heck, before that even, to a time before we started recording time.

If one is so inclined, the other side of Abrams Falls, although little-publicized, is the area’s true beauty. Scattered with small loop trails and split-offs, a backpacker can get lost in here for days. Void of crowds and with many opportunities for bear sightings (and late night visits), quiet adventure abounds. The park has done a great job in clearing good campsites and rigging state-of-the-art bear hangers for food. This is the part of Abrams where you will most likely find river otters and very, very nice fish dangling on the end of your spray line. If you wade in these waters, you can see eight-inch rainbow trout hanging out in the current like they’re having an afternoon meeting.

Three days here, and you will emerge a better, leaner, more brightly lit man or woman.

Stephen Otis is the co-author of “A Road More or Less Traveled,” a narrative about hiking the Appalachian Trail from Maine to Georgia, recently awarded runner-up in the New York Book Festival. Read reviews and order the book at Amazon.com.