When Anna George was a child, she would pester her mother to take her to zoos and aquariums. As she grew up, she conducted research in a variety of aquatic environments — from the Dauphin Sea Lab on the Alabama coast to the Cayman Islands — and her incredible enthusiasm for animals developed into a passion for Appalachian freshwater fish. 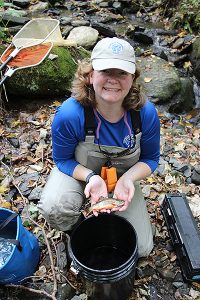 As an undergraduate student, George found her natural habitat in the lakes, streams and rivers of the Mountain Lake Biology Station in Pembroke, Va. Impressed by the diversity of freshwater environments — home to more than 25 percent of all vertebrates on earth — George was roused to protect a variety of life that she felt was “in peril and extremely unknown.”

George studies the aquatic life in Appalachia in order to raise awareness about the ways that humans can better protect these species’ habitats. She leads the Conservation Institute at Chattanooga’s Tennessee Aquarium, teaches biology at Sewanee: The University of the South, writes books about freshwater fish, runs summer youth programs and conducts field research. Through the aquarium, George has adopted a project to reintroduce lake sturgeon, a freshwater fish, to the rivers of her home state of Tennessee, from which they disappeared more than 50 years ago. She often uses their release to give school groups hands-on biology lessons.

George emphasizes that her role is as much about passing on information as it is about conducting research. “The challenge that I enjoy is communicating with people,” she says. “I get so excited and want to share everything I know!”

Through experiential teaching methods and her love for all things aquatic, Anna George inspires others to tap into their inner fish. “We all share this passion for nature,” she says, adding, “we have to learn how to balance our passion for nature with sustainability.”