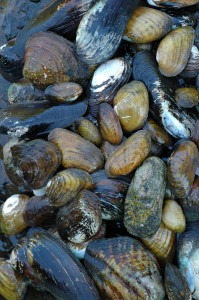 Flexing our mussels: The inland mussel species of Appalachia are unmatched around the world, with the Tennessee River basin alone containing more varieties than China and Europe combined. Photo courtesy of Aquatic Wildlife Conservation Center

In the early 1900s, the aquatic creatures were so abundant that thousands of pearl hunters flocked to the forks of the Holston and Clinch rivers in Tennessee hoping to strike it rich. Of course, the pearl rush didn’t last forever. When the Tennessee Valley Authority completed the Norris Dam in 1936, the downstream mussel population in the Clinch River Valley was decimated.

Dams, the introduction of exotic species, and water pollution – including chemical spills, water treatment plants and prior land use upstream, be it logging, coal mining or agriculture – have all threatened these filter feeders over the past century. According to the Virginia Department of Game and Inland Fisheries, seven percent of the freshwater mussel fauna in the United States is extinct and another 50 percent require special protection under the U.S. Endangered Species Act.

Through all the turmoil, the inland mussel population in the United States – and Appalachia in particular – is unmatched around the world. DGIF estimates that nearly one-third of the 1,000 species of freshwater mussels exist in the United States, and Appalachia has a “lion’s share” of this diversity residing in the southeastern drainages of the Ohio, Tennessee, Cumberland and Mobile rivers. In fact, the Tennessee River basin alone has more species than Africa, and more than China and Europe combined.

Tom Blount, the Chief of Resource Management for the Big South Fork National River and Recreation Area of the Cumberland River watershed and Obed Wild and Scenic River of the Tennessee River watershed, said the diverse mussel population of Appalachia stems from the geological age of the area and the high number of organisms that have evolved in the region.

“The Appalachians as a whole is one of the greatest bio-diverse areas in the country if not the world, and our aquatic resources reflect that,” Blount says.

“The habitats had been fairly stable for a long time [with] a fair amount of bedrock that kind of keeps the streams from moving around as much,” Bradley says. “Some of the diversity comes from the fact that things have been isolated for a long time.”

Currently, sedimentation is the greatest concern regarding mussel populations, which prefer flowing water. “We are modifying land adjacent to streams so much that it’s leading to a lot of sediment going into streams, clogging the substrate,” she says. “If mussels are under really fine particles, they suffocate.”

The two-part shell creatures are the freshwater equivalent of marine clams and oysters. They can be as small as a thumbnail or as large as a dinner plate. Mussels can live to be 100 years old. Their longevity makes them good water-quality indicators, and siphoning actions that filter bacteria, algae and other small particles make them one of the few animals that improve water quality.

“They are good indicators [of water quality] because they are more sensitive than almost anything in the stream,” Bradley says, adding that mussels are used by the EPA to set water standards for ammonia.

Mussels are also important because as filter feeders, they repack nutrients for other small organisms in the streams, Bradley says, adding that mussels are food sources for fur-bearing mammals such as muskrats, otters, raccoons and minks, and if the water flow is low, birds.

Following a 1998 disaster where a tanker truck overturned and spilled 1,350 gallons of rubber accelerant into a tributary of the Clinch River, killing more than 18,000 mussels, the Aquatic Wildlife Conservation Center was formed. The center, which currently houses 300 adult mussels spanning 22 species, focuses on actively propagating mussels to return to regions where they either declined or disappeared completely. Since its formation, thousand of juveniles, ranging in age from one month to nine years old, have been raised by the organization.

Back in the Big South Fork, Blount says the number of species has increased by 20 percent in the past five years, with six mussel species added through artificial propagation and relocation. The park is cooperating with other agencies in Tennessee, Kentucky and Virginia to maintain a free-flowing water system that will keep mussels and other organisms from extinction.

The life-cycle of the mussel is “one of the most complex and interesting in the animal world,” according to DGIF, and this complicates the propagation process. Instead of seeking out a mate, mussels must use the river current to reproduce. Eventually, the fertilized eggs “piggyback,” as Blount explains, to a specific host species and live as a parasite before becoming a juvenile mussel.

When asked what makes the mussel an amazing creature, Blount spoke of this “adaptive” life-cycle but also mentioned the mussel’s resilient ability to withstand fluctuating water levels – from creek-like flows to floods – all the while filtering the water.

In the end, Blount says, mussels belong to a diverse ecological community. If these sensitive freshwater bivalves suffer, other species such as fish, insects, otters and muskrats will suffer as well.