Tom McMullen may be the most water-wise homeowner in the neighborhood.

McMullen, his wife Amanda and their two sons live on six-tenths of an acre inside the town limits of Abingdon, Va. A small front lawn and the house itself take up a third of the lot. But walk out the back door and you’re greeted by four-tenths of an acre with a job to do. Vegetable gardens, a chicken coop, rabbit hutches, berry bushes and newly-planted fig and mulberry trees fill nearly every patch of ground with a specific purpose.

All that functionality demands water. Lots of it. But this summer, even with dry spells and record heat, not a drop of city water has been spilled in the McMullens’ backyard. That’s because over the past six years, McMullen has constructed an elaborate rain barrel system that stores 740 gallons of rainwater diverted from the gutters on the family’s modest home and a single outbuilding. 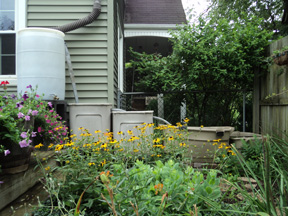 That water has helped them transform a small backyard into a wildly productive micro-farm to feed their family; it has allowed them to practice diligent conservation while keeping their water bill — and sewer bill, as it turns out — quite low.

Here’s something you might not know about your sewer bill: it’s probably not determined by how much sewage you generate. Most municipal systems calculate residents’ sewer bills based on estimates derived from their water usage.

“They figure that what’s coming in is going out,” McMullen says. It’s a reasonable assumption for many people using city water, whose consumption takes place almost entirely indoors — showering, cooking, cleaning, flushing toilets. But what about outdoor usage?

Around 2006, “rain barrels kind of became a big thing in this region,” McMullen says. “Several groups started putting on workshops to teach people how to put them together.” With that community interest as a kickstart, McMullen got to work on his own system. And as a member of Abingdon’s Go Green Committee, he also helped organize and present a series of helping to offer rain barrel workshops at community events.

Workshops typically demonstrate the concept using a thick-walled, food-grade lidded barrel made from a type of plastic that will not break down in sunlight. “You can’t use any that have contained anything toxic,” McMullen says, “so a good place to look is a local bottling company.” Carol Doss, coordinator and workshop facilitator for the Upper Tennessee River Roundtable, a nonprofit that works to improve water quality in that river’s watershed, also suggests contacting companies that make pickles.

Once you get your hands on this type of barrel, the rest is simple: cut three holes. First, cut the lid so a plastic colander can be nested in securely. Your gutter’s downspout should land inside the colander, which will catch debris. Next, buy a half-inch spigot and drill a hole near the bottom of the barrel wall. Coat the spigot’s threads with a sealant (like silicone or Gorilla Glue), and fit it snugly into the hole. The last hole, near the top, is for overflow. Fit this hole with two simple half-inch plumbing couplings — one straight, one elbow — to position a flexible tube so it points down and away from your house or into another barrel.

Of course, rain can be collected in just about anything. Large plastic storage bins and trash cans work too, though they may crack and buckle over time. McMullen began with a 250-gallon tank that once contained a non-toxic substance used for wastewater treatment. He fitted a hose onto the tank and propped it up on cinder blocks at a height just slightly above the high end of his vegetable garden to allow gravity to bring the water through the hose, like a siphon, to the entire garden. “The higher you store your water, the easier it is to get it where you need it,” he says.

One piece of advice Carol Doss gives every workshop participant is how to keep mosquitoes out. Standing water can quickly turn into a mosquito breeding ground if the water is not treated with a product to kill larvae, usually made from bacteria called Bacillus thuringiensis israelensis.

Doss also suggests using the water within two weeks to prevent algae, avoiding moss-killing products on your roof (they can taint the water and harm your garden), and bringing barrels indoors over the winter. “One winter we left ours out and it froze into one humongous chunk of ice,” she says. “It didn’t pop the faucet off, but it could have. And I swear it didn’t melt until late spring.”

When the water is flowing, it can be used to water plants and lawns, fill birdbaths, and wash cars. From a conservation perspective, the benefits are clear. “Just a tiny bit of rain, and you have a ton of water,” Doss says. “It’s a no-brainer. That water would just run off your property. Why not put it to use instead?”