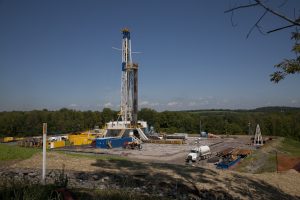 A fracking rig and operation stands among forests and fields in Bradford County, Penn. The state has been a hotbed of fracking activity and controversy over the exact impact of fracking on groundwater. Photo by Bob Warhover

Nearly all types of conventional energy have their fair share of controversy, and hydraulic fracturing, or fracking, to extract natural gas is no different. This highly-profitable process continues to spread while many people call for stricter regulations and more research into its potential consequences.

Fracking now produces one third of all the natural gas in the U.S. Abundant and affordable, electricity generation from natural gas-fired power plants was equal to that of coal-fired plants. But its cheap cost comes with questions — studies suggest that fracking and the wastewater it produces pose threats to groundwater and surface water.

In the regions where fracking takes place, such as the Marcellus Shale formation that underlies much of Appalachia, personal anecdotes abound of flammable tap water, explosions, spills and other water contamination.

In 2009, Dimock, Penn., took the spotlight of the fracking discussion when residents reported drinking water contamination and a water well explosion. The U.S. Environmental Protection Agency took over the investigation and found high levels of methane in many of the drinking water wells.

Although methane can cause deadly explosions or health problems if inhaled in large quantities, methane in drinking water is not poisonous, and the EPA announced that the water was safe to drink. A study by Duke University found that there are naturally occurring pathways that methane might travel through to reach drinking water supplies, but a study in the journal Ground Water used computer modeling to show that these natural pathways are exacerbated by fracking.

In a 2011 study in Pavillion, Wyo., the EPA found a slew of chemicals in samples from two deep wells drilled to monitor groundwater, including benzene, a known carcinogen. Benzene is used in petroleum distillates, which are frequently used in fracking fluid. Residents were told their water was no longer safe. Studies have also shown that the cement casing used in wells can be faulty or deteriorate over time, allowing the fluids in the well to leak out into the surrounding rock layers and into groundwater.

Tim Lucas, director of marketing communications for Duke’s Nicholas School of the Environment, says it’s hard to know fracking’s exact impact on water since there is no baseline sampling in many places where it’s done. Without water testing before fracking operations began, it’s hard for individual citizens or groups to prove that their water problems are caused by fracking.

Wastewater, or flowback water, contains not only the fracking fluid that was injected into the well, but often other contaminants brought up from underground during the fracking process like radioactive materials and heavy metals. Wastewater can easily contaminate groundwater, and it must be properly disposed of, which requires significant treatment before it can be released back into bodies of water.

According to Dusty Horwitt, senior counsel for the Environmental Working Group, there have been cases in Pennsylvania of wastewater going to sewage treatment plants or industrial facilities that don’t adequately remove chemical pollution and pass the water on to rivers without proper treatment. Wastewater has also been directly dumped, or spilled, into creeks and rivers, Horwitt says.

A study published this year by Cornell University examined multiple reports of farm and companion animals dying after drinking water contaminated with wastewater from fracking operations. Soil tests from a cow pasture contaminated by leaked wastewater had high levels of strontium, which can be toxic to both animals and people. According to the Agency for Toxic Substances and Disease Registry, strontium is a naturally occurring element, but eating or drinking large amounts of it can be lethal.

It’s not clear exactly what chemicals are used in fracking fluid because many states have “trade secrets” exemptions that allow companies to keep fracking recipes secret from other companies. In Pennsylvania, a new law allows doctors to find out what’s in the fracking fluid, but forbids them from telling other doctors. Some physicians say the law doesn’t specify what they can tell patients, thus putting them at risk of unknowingly violating the law.

In response to growing health concerns, the Southwest Pennsylvania Environmental Health Project opened an office this year to serve as a resource to people who have health problems related to natural gas drilling operations. Raina Rippel, the project’s director, says people come in with problems ranging from skin disorders to gastrointestinal concerns.

Even in states where fracking is currently illegal, citizens are grappling with the industry and legislators to ensure safeguards that protect water and health. In North Carolina, Gov. Bev Perdue vetoed legislation that would have allowed fracking, but her veto was overridden by the state legislature. Many groups, like the Ohio Environmental Council, have called for a moratorium on fracking until proper regulations are put into place.

As studies, research and legislation struggle to keep up with the rapid expansion of fracking across the country, one thing is clear: there are many questions but few answers. Fracking is an inherently risky process, Horwitt says, but the exact risk and magnitude are only beginning to emerge.