In the Pipelines’ Paths: Environmental damages to special places 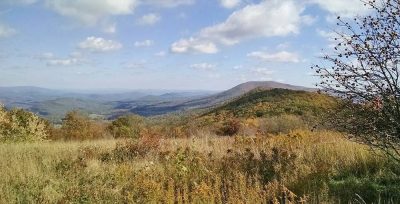 This photo was taken on Peters Mountain, close to where the proposed Mountain Valley Pipeline would cross the Appalachian Trail. A hiker standing here would see the pipeline right-of-way traversing a ridge to the left. Photo courtesy of Roanoake Appalachian Trail Club

It’s not an easy hike up to the top of Peters Mountain, which straddles West Virginia and Virginia. Unlike some Appalachian mountains, there aren’t roads that can get you part of the way up. But the hike is worth it, say those who spend a lot of time on the mountain.

“It is a special, beautiful transitional zone between Virginia and West Virginia,” says Kim Kirkbride, a self-employed bookkeeper who lives in Giles County, Va. “By the time you get there, it feels like you’re in another place, in a different realm. It makes me realize all the things that aren’t important. It’s so magnificently beautiful.”

Dana Olson, a physician who lives at the base of the mountain on the West Virginia side with his wife and mother-in-law, agrees. “It’s incredible, a wonderful, magical place,” he says. Getting to the top is a steep hike that takes maybe an hour. “It’s an ‘Almost Heaven’ kind of place, for sure.”

It’s a huge mountain for this region, 52 miles long with elevations above 4,000 feet. The Appalachian Trail follows its ridgeline for several miles between the Celanese Corporation’s industrial plant in Narrows, Va., and the Peters Mountain Wilderness Area.

That stretch of mountain is also where the Mountain Valley Pipeline company wants to cross with its 42-inch natural gas pipeline — a possibility that has many outraged.

“This pipeline will transform ‘Almost Heaven’ into ‘Almost Hell,’” says Olson. “Now, hikers along the AT stop and ponder life. They can camp in a meadow up there where you can see five or six counties in Virginia and West Virginia. Instead of that, this will be a place to just get through. It will turn into something that’s a threat and a danger.”

The pipeline crossing will harm both views and water quality, opponents say. “The mountain is just alive with water,” says Olson, who recently found a spring by the Appalachian Trail near the top of the mountain. The draft environmental impact statement tends to gloss over such concerns, saying Mountain Valley has planned mitigation measures such as set-backs and vegetation screens to resolve such issues.

“Like all of our mountains the pipeline is proposing to cut through, Peters Mountain is full of water and layers of rock that filter that water,” Kirkbride says. Multiple springs bubble up out of the mountain, and one even serves as the municipal water source for Lindside, W.Va.

“Even if that spring isn’t right next to the pipeline, we don’t know how everything flows in the mountain,” says Kirkbride. “It’s hard to say who’s going to suffer damage when the pipeline leaks.”

Even without a leak, the pipeline construction and maintenance will impact water quality. The pipeline will traverse the mountain’s steep slopes, and the permanent 50-foot right-of-way will be stripped of most vegetation. This will lead to sedimentation issues, according to geologist Pamela Dodds. She wrote a report on the problem submitted to FERC by Roanoke County. Opponents also worry about what the pipeline will do to viewsheds.

These two major pipelines proposed to pump natural gas from the fracking fields of northern West Virginia and southwestern Pennsylvania to the East Coast would be huge construction projects, stretching for hundreds of miles and carving a swath through national forests, wetlands, over and down steep ridges, through private property and public attractions, and across both the Blue Ridge Parkway and the Appalachian Trail. 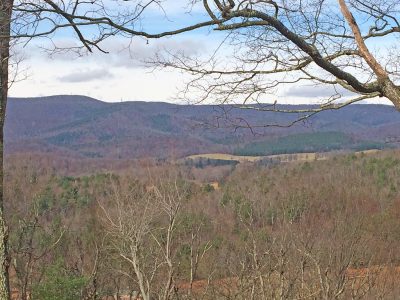 The Mountain Valley Pipeline’s right-of-way on Poor Mountain would be visible from this Blue Ridge Parkway overlook. Photo courtesy of Roberta Bondurant

The Mountain Valley Pipeline would start in Wetzel County, W.Va., and snake down through the Mountain State before crossing Peters Mountain into Virginia, where it would join the Transcontinental Pipeline in Pittsylvania County.

The Atlantic Coast Pipeline would start in Harrison County, W.Va., and wind through the state, cutting through the Monongahela National Forest before crossing into Virginia. From there, it would slice southeast through Virginia before dividing, with one arm headed to Norfolk, Va., and the other headed southwest across the North Carolina Coastal Plain.

“Several of the Greenbrier River tributaries the Atlantic Coast would cross are native brook trout streams,” he says. “Native trout are a little bit like a canary in the coal mine for the mountains. If they cannot breed successfully in a location, that tells you there’s something wrong with the water quality and that maybe you have sediment issues.”

The Atlantic Coast Pipeline will also impact the James River in Virginia, crossing under the river near James River State Park. Many of its tributaries are also in the pipeline’s path. “Virtually all of the major rivers that form the James are affected,” says Freeman. “We’re talking the potential for serious water quality problems.”

This is exacerbated by the karst topography in Bath, Highland, Augusta and Pocahontas counties, according to Freeman. Karst topography is landscape made up by limestone and other soluble rocks, which creates a network of underground drainage systems and caves. “The water recharge areas for wells and springs, including the springs that form the headwaters of the James and Cow Pasture rivers, are susceptible to disturbance underground,” he says. “Groundwater and the water sources for hundreds, maybe even thousands of people who depend on well and spring water will be put at risk.”

Freeman is also concerned about the miles of ridgeline the pipeline will run along. In order to achieve the necessary 125-foot construction right-of-way on these narrow ridgelines, Freeman says that for half a mile, the pipeline company will have to cut 25 to 50 feet of elevation from the top of the mountain.

“It would become a very visible scar, and then there’s the challenge of what to do with all the rubble. This would destroy the vistas that are so significant for this area, harming the tourist attraction and inviting serious erosion and sediment into nearby waters.”

Unlike Peters Mountain, Bent Mountain, Va., is not remote or isolated. It’s a small community of about 800, scattered across an upland plateau bisected by U.S. Route 221. When the Mountain Valley Pipeline shifted its route away from Floyd, Va., Bent Mountain came into its crosshairs.

The pipeline would come up over the steep Poor Mountain and cut through Bent Mountain’s forests, springs, wetlands and headwaters before crossing the Blue Ridge Parkway and heading south into Franklin County. 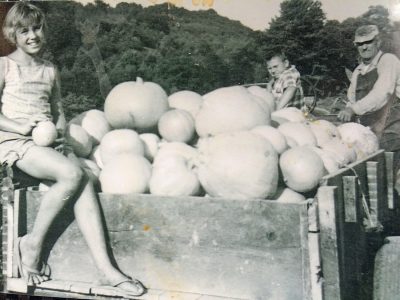 Family photos of life on Bent Mountain include images of harvests and orchards. Courtesy Marie Henry

There are a lot of “No Pipeline” signs in yards around Bent Mountain, but Kathy Chandler may be one of the most fired-up opponents. The pipeline would cut right across the property where she and her husband make their home, and a narrow private road she and others use to get to their homes would become an access road to the pipeline during and after construction.

She has even found the survey process upsetting. “It is an invasion of privacy,” she says. “These surveyors don’t seem to realize they’re in someone’s home, in someone’s yard. We just have bigger yards around here.”

Her big yard includes three springs that flow together to join Mill Creek, which flows into Bottom Creek and then into the Spring Hollow Reservoir, one of the main sources of drinking water for Roanoke County. Chandler worries about the impact to the springs from the pipeline and the access road. “Our water is your water,” Chandler says.

Bondurant — a board member of POWHR (Protect Our Water, Heritage, Rights), a grassroots coalition fighting the pipeline — has gotten to know many of the elderly residents of Bent Mountain, many of whom grew up in the community when thriving orchards provided its economic lifeblood. Several of these residents have property in the pipeline’s path, Bondurant said. “Somehow, they managed to go around the expensive subdivision, though,” she says.

Bondurant and Chandler studied the area’s history, and Chandler became friends with Jack Hale, an 85-year-old retired pilot whose grandfather owned 200 acres along Mill Creek and Green Hollow. They used what they’ve learned to submit arguments to the Federal Energy Regulatory Commission, which has permitting approval authority for the pipelines and conducted a public comment period for its Draft Environmental Impact Statement in late 2016.

Olson, the Monroe County physician, doesn’t hold out much hope for FERC denying the project, though. “The public is spending thousands and thousands of hours reading through these applications and asking questions and trying to get clarifications,” he says. “But FERC is funded by the people it regulates, and as far as I’m concerned, the gas industry is a ventriloquist and FERC is Charlie McCarthy [the ventriloquist dummy]. It’s like we the people who live nearby are just in the way. We’re nothing but noise to them.”