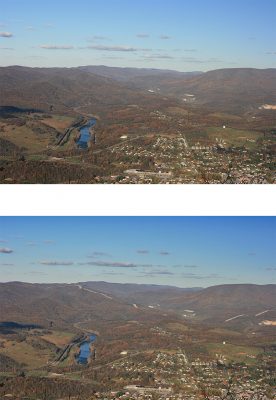 For generations, thru-hikers have come from far and wide to view the Appalachian Trail’s grand vistas. Many of those views, however, could be marred for future hikers.

The 300-mile Mountain Valley Pipeline and the 600-mile Atlantic Coast Pipeline, two proposed natural gas pipelines that are scheduled to begin construction later this year if approved, would bore underneath the Appalachian Trail and require temporarily clearing as much as a 200-foot-wide right-of-way in some areas.

The proposed routes for both 42-inch pipelines would also cut through national forests. For the Federal Energy Regulatory Commission to approve these routes, the U.S. Forest Service would need to make fundamental changes to each forest’s Land and Resource Management Plan.

Andrew Downs, regional director of the Appalachian Trail Conservancy, worries this would start a nationwide trend of tweaking forest protection plans for every new development.

“Changing or undermining that level of protection unnecessarily affects the entire national trail system,” Downs says. “That would allow for all sorts of future projects to come in and have a negative impact. It’s a slippery slope.”

“There is also a suite of a dozen or more prominent vistas along the trail where [the Mountain Valley Pipeline] would negatively affect the landscape,” Downs continues. “It would affect the experience of a hike along the Appalachian Trail for a long time.”

Maury Johnson, a member of several Mountain Valley Pipeline opposition groups in Monroe County, W.Va., whose land would be crossed by the pipeline, is particularly worried about how the construction will affect Peters Mountain (read more here).

“When they were building the Appalachian Trail in the ‘20s, they literally took a 22-mile detour to the top of Peter’s Mountain so they could see the vista to the west,” Johnson says. “If this project gets approved, you’d be able to see the pipeline for about 30 miles snaking toward you, coming across this wonderful view.”

Visual and environmental impacts like these only get worse when combined with the Atlantic Coast Pipeline, Downs says. If approved, the project would cross the Appalachian Trail near the border of Virginia’s Augusta and Nelson counties.

“No effective cumulative impact analysis has taken into account both of these projects in terms of the Appalachian Trail,” Downs says. “Both pipelines in their draft environmental impact statement said that the other pipeline was going to contribute to cumulative impacts, but they refuse to analyze those impacts.”

According to Downs, the planning process for the Mountain Valley Pipeline’s proposed route through Virginia and West Virginia hardly followed best practices, which he said was unusual behavior compared to other large-scale energy projects he’s worked with.

“At no time in their analysis have they utilized a correct centerline for the trail,” Downs says, referring to the path of the Appalachian Trail, which regularly shifts to more sustainable and scenic locations. “As a result they’ve got a pretty terrible route that includes significantly avoidable impacts to the Appalachian Trail. Not only is that ridiculous, it was also completely preventable. They could’ve just sat down with us in September like [the Federal Energy Regulatory Commission] told them to and gotten that information.”

Mountain Valley Pipeline, LLC, has not responded to a request for comment.