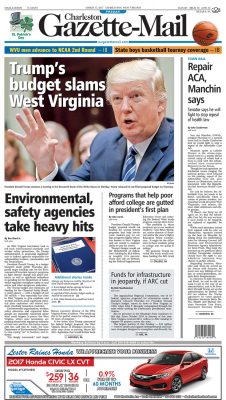 On March 15, President Donald Trump took the stage at a rally in Nashville, Tenn. Befitting the campaign-style event, he opened with familiar, crowd-tested applause lines.

“It’s patriotic Americans like you who make this country run, and run well,” the president told his supporters. “All you want is a government that shows you the same loyalty in return.”

The next morning, the White House would unveil the blueprint of its proposed 2018 budget, giving Americans a first look at the administration’s priorities in fiscal form. At the rally that evening, in between pledges to build a border wall and save the coal industry, Trump promised that his budget would “shrink the bloated federal bureaucracy.”

When the document was released, its vision of America and the role of the federal government was hardly recognizable. The “America First” budget — as it has been coined by the White House — would offset a $54 billion boost to the military and national security by cutting the same amount from domestic, non-defense spending. Nearly 20 agencies and dozens of programs would be axed altogether.

Responses flooded in from politicians and advocacy groups of every stripe. Some criticized the administration’s disregard for public support of the arts and sciences, including medical research. Other reactions focused on the irony that Trump wants to eliminate programs that benefit Americans in the areas that helped him win the White House. The budget would wipe out decades-old anti-poverty programs and newer efforts to create jobs in communities that are struggling economically, like many in Appalachia and the Rust Belt.

On the day after the blueprint’s rollout, the front page of West Virginia’s largest newspaper, the Charleston Gazette-Mail, led with the headline “Trump’s budget slams West Virginia.” The Roanoke Times ran an editorial titled “Trump backhands Appalachia” that reflected on the region’s support for the president and mused, “Trump has an odd way of returning the favor.”

Although Congress controls federal spending, the White House’s so-called “skinny budget” is the clearest picture congressional lawmakers have yet of the president’s priorities. It could have been something positive for Trump to stump on. But a few days after the Nashville event, when the president held an almost identical rally in Louisville, Ky., he decided not to mention it.

Some of the blueprint’s uncompromising cuts to programs in rural areas raised the question: where did these ideas even come from? In February, the Heritage Foundation, a think tank with close ties to the Trump administration, put forward its own wish list for the federal budget. Both the official blueprint and Heritage’s “Blueprint for Balance” prescribe many of the same cuts and provide similar justifications for them.

“Heritage was the number one source,” Stephen Moore, a Heritage Foundation economist who advised the Trump campaign, told The Washington Post. “That was partly because there wasn’t a lot of time. They decided ‘we will get rid of this, and get rid of that.’”

One puzzling cut in the White House blueprint that can’t be traced back to any of Trump’s numerous promises is the elimination of the Appalachian Regional Commission, an economic development agency that invests in workforce training and infrastructure needs like broadband. The Heritage blueprint also calls for doing away with it. While the White House does not explain why the commission is on the chopping block, the Heritage Foundation describes it as “duplicative carve out” that “diverts federal funding to projects of questionable merit.”

Members of Congress were quick to defend the commission and its accomplishments. Rep. Hal Rogers (R-Ky.) called the proposed cuts “draconian, careless and counterproductive.”

“Today, nearly everyone in the region has access to clean water and sewer, the workforce is diversifying, educational opportunities are improving and rural technology is finally advancing to 21st-century standards,” Rogers said in a statement. “But there is more work to be done in these communities.”

Since October 2015 alone, the Appalachian Regional Commission has invested more than $175 million in 662 projects throughout the region. Around $75 million of that has supported initiatives to diversify local economies that have long relied on coal mining and now hope to attract new industries.

The Coalfield Development Corporation in West Virginia received a grant to scale up its workforce development model and expand to other counties. The group Friends of Southwest Virginia is using commission funds to create community access points along the New River that will enhance the region’s ecotourism industry. Those projects and hundreds of others are projected to create or retain thousands of jobs and leverage nearly $142 million in private dollars into the region’s economy.

Around the same time, coal production in eastern Kentucky fell to a level not seen since the Great Depression, Appalachian states shed thousands of coal mining jobs and the nation’s three largest coal companies fell into bankruptcy, largely due to the growth of natural gas and the falling demand for coal globally.

Trump won 400 out of the 420 counties in which the Appalachian Regional Commission operates partly on the promise that he’ll “bring the coal industry back 100 percent,” which policymakers and energy experts accept is an impossibility. The president’s congressional counterparts are ready for him to expand on his message to Appalachia.

“It’s true that the president won his election in rural country,” Rep. Rogers told Reuters. “I would really like to see him climb aboard [the Appalachian Regional Commission] vehicle as a way to help us help ourselves.”

Climate and Energy in the Crosshairs

Even many expected cuts are deeper than anticipated. It comes as no surprise that a candidate who called the U.S. Environmental Protection Agency “a disgrace” would target the agency’s resources in addition to rolling back environmental rules. But the blueprint calls for gutting EPA funding by nearly one-third and eliminating approximately 3,200 positions, making it the hardest hit of any federal agency.

EPA initiatives ranging from the Chesapeake Bay restoration program to the Clean Power Plan would be zeroed out. Funding for the enforcement of federal environmental laws like the Clean Water Act and Clean Air Act would be reduced with the unrealistic expectation that states would pick up the slack.

According to an analysis by the North Carolina Sierra Club, federal dollars pay for almost half of the state’s multi-million responsibilities under the Clean Water Act, Clean Air Act and Safe Drinking Water Act. If North Carolina or any other state lost those funds, it would likely weaken programs that, in some cases, have also been cut by state budget-makers.

The EPA’s work to research and respond to climate change is also targeted, as is the climate-related work of other agencies including the U.S. Department of Energy, the National Oceanic and Atmospheric Administration and NASA. When asked about the reason for those cuts during a White House press briefing, Office of Management and Budget Director Mick Mulvaney said “we consider that to be a waste of your money.”

In another ironic twist related to the coal industry and its future, the White House wants to cut the Energy Department’s Advanced Research Projects Agency-Energy and the Office of Fossil Energy, which researches carbon capture technologies — the closest America has to anything resembling “clean coal.”

A week after the budget was announced, 35 Senate Democrats wrote a letter to their colleagues calling the Trump administration’s pledge to protect clean air and water “meaningless,” considering the proposed cuts to the EPA.

“There is already bipartisan agreement that President Trump’s harmful budget will be a nonstarter in Congress,” Sen. Tim Kaine (D-Va.), who added his name to the letter, said in a statement.

In a time of historic political polarization, the unpopularity of ideas in the blueprint transcends the partisan divide. Weeks before all the details were known, as rumors swirled about massive cuts to foreign aid and diplomacy, Sen. Lindsey Graham (R-S.C.) described the White House’s budget as “dead on arrival.”

According to a March poll by Quinnipiac University, most Americans would be fine with that — for any number of reasons. Sixty-seven percent of respondents oppose cuts to federal climate research and environmental programs. Nearly three-quarters of those polled are “somewhat concerned” or “very concerned” about climate change and 59 percent say the United States should do more to address it.

“When it comes to cutting Public TV, the arts, after school programs and scientific research to improve the environment, it’s a stern ‘hands off’ from voters,” said Tim Malloy, assistant director of the Quinnipiac University Poll, in a release announcing the results.

The White House will send its full 2018 budget to Congress later this spring. In the meantime, Congress must address federal spending for the rest of this year before the current resolution to continue funding the government expires on April 28. But, when it comes to Trump’s brazen approach, the White House’s budget office Director Mick Mulvaney says “folks who voted for the president are getting exactly what they voted for.”

The Appalachian region would take a hit if cuts to numerous national programs that benefit rural or low-income Americans were to go into effect. The following are just a few of the agencies and programs not mentioned in this article that would be eliminated:
— Corporation for Public Broadcasting, which supports nearly 1,500 locally owned public radio and television stations nationwide.
— The Corporation for National and Community Service, which funds AmeriCorps and other national service initiatives.
— Legal Services Corporation, which provides legal aid to low-income Americans.
— The Energy Department’s State Energy Program, which assists states in improving energy efficiency and expanding renewable energy.
— The Energy Department’s Weatherization Assistance Program, which makes grants to state and local governments to provide home weatherization services to those in need.
— The Department of Health and Human Services’s Low Income Home Energy Assistance Program, which helps families afford their energy bills and minor energy-related home repairs.
— The Department of Treasury’s Community Development Financial Institutions Fund grants, which leverages private capital by investing in economic development in communities where it’s most needed.