Who Profits from the Pipelines?

Utility giants such as Dominion Energy and Duke Energy explain their interest in building new pipelines by pointing to their need for more natural gas to replace retiring coal plants.

But one doesn’t have to scratch too far beneath the surface to find another explanation.

“The way the regulatory system is set up at the moment,” says Lorne Stockman, senior research analyst at Oil Change International, “companies are incentivized to build new infrastructure and create over-capacity.”

Oil Change International is a research and communications group that advocates for the switch to renewables while highlighting the true costs of fossil fuels. The group has produced several recent reports that help put the Atlantic Coast and Mountain Valley pipelines in context.

“It comes down to what makes the most money for the companies involved, and the regulatory system is not set up to reward Dominion and Duke for efficiency savings,” says Stockman. In other parts of the country, such as Massachusetts, incentives are more climate-friendly. “[The regulatory system there] doesn’t reward them for load growth or increasing generation, but they are rewarded for improving efficiency.”

While the corporations stand to benefit from tax breaks and are assured a profit, the environmental and safety risks of the pipelines will be absorbed by the communities they pass through and by everyone affected by the rapidly changing climate.

“Everyone’s vying to get their project in because they know the industry is overbuilding. And everyone wants their pipeline committed as soon as possible.” 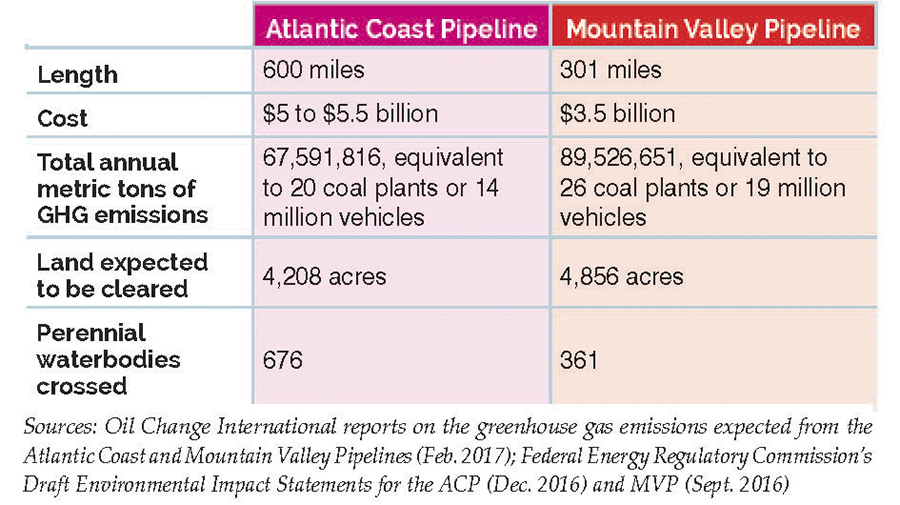 Are these projects needed? 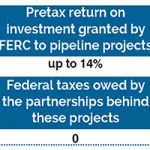 Even if more natural gas is needed to replace retiring coal-fired plants, as many industry experts argue, does that mean that we need more pipeline construction?

It’s hard to make that case when so much capacity in existing pipelines is going unused.

Pipeline developers must demonstrate to the Federal Energy Regulatory Commission that they have customers for the gas and thereby show a need for the natural gas being shipped. For both the Atlantic Coast and Mountain Valley Pipelines, the vast majority of the gas will be sold to subsidiaries of the parent companies building the pipelines. 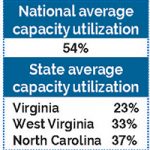 “In situations in which a pipeline developer contracts with an affiliate company to ship gas through a new pipeline, this is strong evidence that it is doing so because of the financial advantage to the parent company from building the pipeline, but not necessarily that there is a need for the pipeline,” according to a recent report by the Institute for Energy Economics and Financial Analysis.

For some, the promise of new jobs is a major selling point of the pipeline projects. But any large-scale employment during construction is short-lived, and these jobs may or may not go to local residents who need them.

Projected long-term employment numbers for operating the pipelines and compressor stations are significantly lower than during the construction phase.

Compare this with jobs in the solar sector: employment in Virginia is strong, North Carolina is booming and West Virginia has a lot of room for growth.

Why the rush to build the pipelines?

The companies building the Atlantic Coast and Mountain Valley Pipelines stand to profit from these infrastructure projects. When granting permits, the Federal Energy Regulatory Commission guarantees the companies building the pipelines a profit by authorizing them to adjust their rates on transporting gas. At the same time, the partnerships financing the pipelines — such as Dominion Midstream Partners, which has indirect ownership of the Atlantic Coast Pipeline, and EQT Midstream Partners, a lead partner in the Mountain Valley Pipeline project, are not required to pay federal taxes.

According to the New York Times, Duke has paid no total income tax between 2008 and 2015. Guaranteed profits and low tax rates are just two of the benefits the tax codes grant companies in the energy sector.

How would pipelines affect the climate?

Under the previous administration, the United States worked with other nations to set a path toward limiting the severity of climate change, first in Copenhagen and later in Paris.

The United States proposed to reduce its greenhouse gas emissions significantly over the coming two decades. Toward that end, the Obama administration issued standards that would have cut methane emissions nearly in half.

Over a 20-year timeframe, methane is nearly 86 times more powerful as a warming agent in the atmosphere than carbon dioxide. One of the major sources of methane emissions is the production of natural gas.

A recent study by Oil Change International indicates that if current projections hold true, the United States would exceed its entire greenhouse gas targets just through its dependence on natural gas, and particularly from the boom in production from the Marcellus and Utica shale formations. This ominous forecast included the Obama administration’s reduction in methane emissions — which Congress and President Trump have since overturned. That means that methane emissions from gas production are projected to exceed the country’s entire allotment for greenhouse gases even sooner.

Energy needs can be met with existing pipelines coming out of the Appalachian Basin. But as companies rush to extract more natural gas, the overall capacity could soon be reached. According to the study, “If no new takeaway capacity is built, production of around 116 trillion cubic feet of potential gas production from now through 2050 would be avoided.” 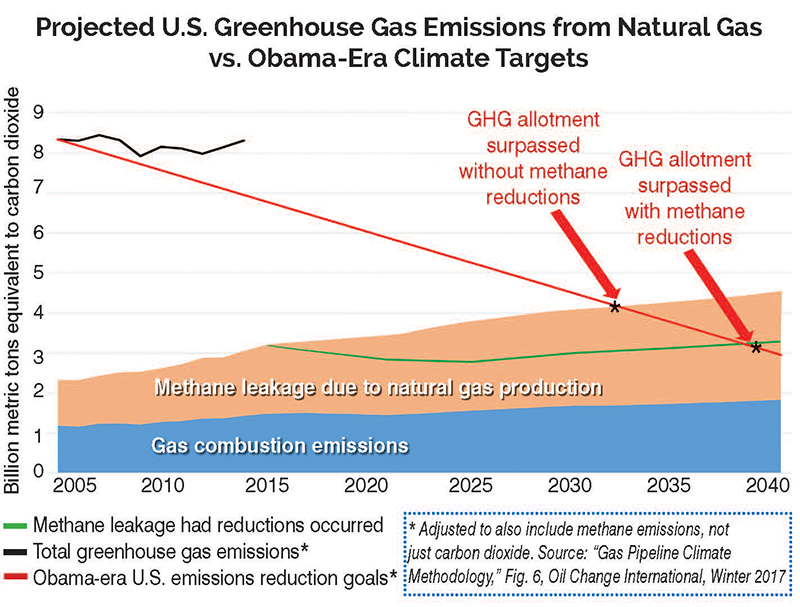