In the northwest corner of Highland County, Va., there is a secluded, stream-furrowed valley unlike anywhere else in the state. Here, clear waters amble among remnant stands of red spruce. The high-pitched calls of northern saw-whet owls echo among the restless boughs, while snowshoe hares duck in and out of the understory and northern flying squirrels den in the old cavities left by wayward woodpeckers.

Located in the Warm Springs Ranger District of the George Washington and Jefferson National Forest, the Laurel Fork Special Management Area was once a priority candidate for the protective status of a wilderness designation. Resistance from local landowners, however, stalled these efforts.

Despite this, Laurel Fork offers some of the best opportunities for solitude in the state — a quality enhanced by its proximity to the National Radio Astronomy Observatory, just a crow’s flight south and over the border in Green Bank, W.Va. Here, astronomers utilize the world’s largest fully steerable radio telescope to search for signs of extraterrestrial life.

The popular astronomer Carl Sagan wrote that the energy received by all the radio telescopes on Earth is dwarfed by a single snowflake striking the ground. To protect the radio observatory’s sensitive instruments from electromagnetic interference, which could drown out these impossibly faint signals, the Federal Communications Commission established a 13,000 square-mile National Radio Quiet Zone. Laurel Fork, it so happens, sits smack in the center of this zone. Wifi and radio use in the immediate area is restricted, and cell phone towers are few and far between.

For those seeking solitude, this radio silence is part of the attraction, according to Warm Springs District Ranger Elizabeth McNichols. “In my mind, it really enhances the experience,” she says. Freed from the buzzes and pings that punctuate the livestream of smartphone-dependent living, a hiker’s thoughts may wander along with their feet. 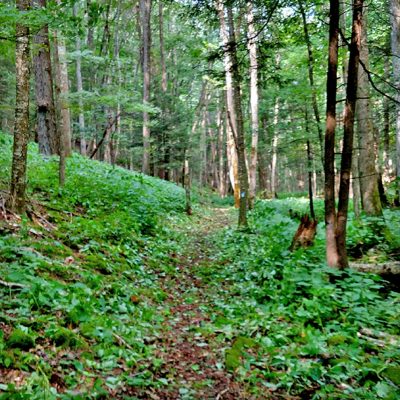 After the trail work is complete the path is again clear for hikers. Photo by Lauren D’Amato

Twenty-eight miles of trails wind among Laurel Fork’s myriad tributary runs. Many follow old narrow-gauge railroad beds where, almost a century ago, steam engines carted men with crosscuts and axes into the woods each morning and emerged laden with timber at day’s end. In their absence, a clarifying, restorative silence reigns.

This past fall, I served as the assistant leader with a trail crew for Southern Appalachian Wilderness Stewards, a regional conservation nonprofit. Over nine days, five other young seasonal staff and I, wielding the same hand tools the 20th-century logging crews once used, removed 65 fallen trees, cleared brush and painted blazes along eight miles of trail, dug over a dozen drainage features, and improved trail visibility at numerous stream crossings along a 12-mile loop of trails. Though the entire loop is a worthwhile hike, you need only walk the 3.5-mile Locust Spring Run Trail to gain a sense of the area’s history.

On the long, windy drive out to the trailhead at Locust Springs Day Use Area, you may notice signs reading “NO PIPELINE” posted by the roadside. At one point, the proposed route of the Atlantic Coast Pipeline ran just a few miles south of Laurel Fork. Dominion Energy moved its proposed route even further south after the Forest Service issued a letter expressing concerns over the pipeline’s potential effects on sensitive local habitats. Despite this change, the pipeline will still cross nearly 16 miles of George Washington and Jefferson National Forest in the state, including sensitive habitats. 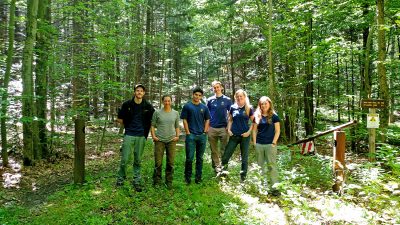 From the picnic area, the trail delves for a mile and a half through stands of red spruce transitioning into red pine. The path is easy underfoot — the old railroad bed is preserved in the trail’s gentle grade. You may notice a series of ditches spaced at intervals along the trail — or, if we did our job well, you may walk right over them without a second thought.

The field crew did the majority of our drainage work along this stretch. The ditches are meant to divert rainwater off the trail, slowing the process of erosion. Though structurally simple, most trail features are incredibly labor intensive. Hours of struggle and strife go into building something expressly intended to be invisible to the average hiker’s eye. Our work should preserve the illusion that you’re walking a path worn by years of boot-shod feet tracing the most pragmatic path over the land.

Eventually you will come to the intersection of Locust Spring Run and Buck Run Spur. From here, the trail veers right and braids itself with the creek. As you press further, note the sudden transition to northern hardwood forest, characterized by the occurrence of sugar maple, black cherry, yellow birch, northern red oak, red maple and sweet birch.

Rhododendron grows thick near Locust Spring Run’s terminus. If you plan to stay the night, there are a number of campsites right along Laurel Fork. The namesake of the largest, most popular campsite, Slabcamp, is immediately clear. Past pilgrims have stacked slabs of smooth shale from the creek beds into armchairs and hearths. Though it’s as close to a luxury suite as you’ll find in a potential wilderness area, don’t follow their example by stacking more — the local aquatic life will thank you for not disrupting their home.

While Laurel Fork’s trails were our workplace, Slabcamp was our home. The stream’s gentle voice coaxed us awake each morning and lulled us to sleep each night. During our breaks, we’d ease back onto our packs and gaze up through the shifting boughs. In our free time, we’d wander the streambeds and scramble up the cobbled slopes, suddenly kids again. Some nights, we lounged around a roaring fire and read Game of Thrones and poems by Wendell Berry aloud to one another. Other nights, we swapped ghost stories or, content after a long day’s work, sat silent and reflective, gazing up at the star-studded night sky.

Just a ways south, over the next few ridges, astronomers confronted the roaring silence of deep space, hoping for a sign that we’re not alone in the void.

At Laurel Fork, the silence presses close like a soft blanket. Those looking outward may cast their hopes with the scientists at the radio astronomy observatory. Here, one comes to look inward.

Locust Spring Run
Length: 7 miles (3.5 in, 3.5 out)
Difficulty: Moderate
Directions: From the intersection of US 220 and US 250, head west on US 250 for about 23 miles, passing into West Virginia, to the junction with WV 28. Turn right and go about 6.5 miles to the Locust Springs Picnic Area sign, then turn right.
Contact: Call Warm Springs Ranger District (540-839-2521) or visit tinyurl.com/locustspringrun