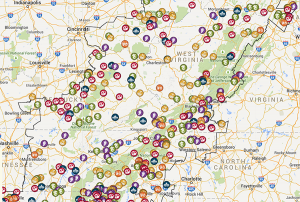 The interactive map on Bon Appetit Appalachia!’s website allows users to search by keyword, category and state. The site also lists resources to learn more about sustainable agriculture in Appalachia.

The Appalachian Regional Commission aims to nourish the nation’s growing grassroots movement with an initiative to market food culture. Last year, the ARC published a map in Food Traveler magazine, titled Bon Appétit Appalachia!, to allow tourists to eat their way through the Appalachian region’s 13 states, spotlighting culinary experiences from farmers markets to breweries. Focusing on sustainability as well as economic development, the ARC picked 283 out of 900 nominees based on the establishments’ dedication to serving local, seasonal food and beverages.

As interest in unique cuisine grows, the ARC hopes to encourage exposure to Appalachian food, which boasts a rich heritage in what a Wall Street Journal article describes as “one of the most agriculturally abundant areas in the U.S.”

“[Our regional food] is not commercially available,” says Susan Owen, a farm owner in Boone, N.C. “You can’t go to the grocery store and buy a ramp.”

However, it’s not all turnip greens and biscuits. One of the featured restaurants, IvyWild of Sewanee, Tenn., serves a cornbread flan — a hybrid of Appalachian and European comfort food traditions. The restaurant’s popularity is just one example of the region’s local food culture and developing agritourism market, which the ARC hopes to showcase through the Bon Appétit project.

In a promotional video, Bob Jenkins, associate publisher of American Heritage Magazine, stresses the map’s role in highlighting the region’s progressive trends. “We love the fact that … with this map guide in their hand [people will] see that this is not your grandmother’s Appalachia.” Peggy White of the Pulaski County, Va. Chamber of Commerce credits the program for bringing national attention to a Virginia farmers market, The Marketplace, which subsequently was awarded a $57,000 U.S. Department of Agriculture Farmer’s Market Promotion grant.