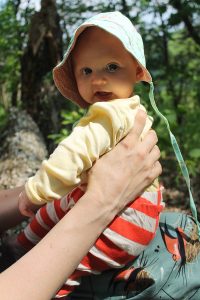 During Baby Josie’s first mountain hike, her parents took her on a 10-mile loop that wandered by a pond of lily pads, along ridgelines and through pine groves. Photo by Dana Kuhnline

It may not have been my wisest decision to insist that the 10-mile loop at Zaleski State Forest was a perfect choice for a first mountain hike with our new baby. It didn’t help that it was 90 degrees the first weekend in May. About five miles in, Baby Josie had me wondering if we had brought enough diapers. But, as they say, God looks out for fools and children, and luckily we had one of each! The diapers held out, we made it back before dark, and the baby didn’t cry until we put her in the carseat for the trip home.

When my husband and I moved from West Virginia to Columbus, Ohio, the first thing we did was look up hikes in the nearby Appalachian foothills. About an hour and a half away in Vinton County, the least populated and most forested county in Ohio, we found Zaleski State Forest, and it immediately became a favorite.

This gem hosts the 23-mile Zaleski State Forest Backpack Trail resplendent with wildflowers and local history. Several shorter options, including the 10-mile day loop, are available thanks to side trails. An interpretive pamphlet shares information on natural features as well as charming historical notes — including the story of the Moonville tunnel ghost, an ill-fated (and purportedly intoxicated) brakeman who once worked the rails in the long-abandoned former mining town.

Unfortunately, we didn’t see the ghostly lanterns mentioned in the hiking guide, though we did hear the laughing cry of woodpeckers, as well as a number of songbirds, turkeys and owls. The forest has recovered beautifully from the time just after the Civil War when the area was strip-logged to feed iron smelting furnaces in the area. Shortly after, the iron industry moved west and poor soil fertility in the hilly area led to a 1930s federal buy-out of unproductive small farms and the beginning of the restoration of the forest. 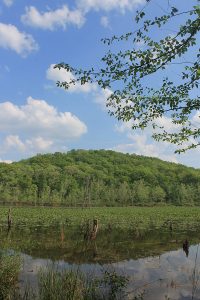 Depression-era projects also developed nearby Hocking Hills State Park, the most popular state park in Ohio with attractions such as Old Man’s Cave and Ash Cave. Enormous caves and waterfalls are made magical with stone bridges, cut passageways and stairwells built by the Civilian Conservation Corps, which the years have blended into the sandstone landscape to create a view out of The Hobbit.

But if you want to get your boots dirty, walk quiet forested ridges, and enjoy backpacking dinners of fresh picked chanterelle mushrooms under the stars, drive the extra 30 minutes to Zaleski State Forest.

Parking for the trail is across from the Hope Furnace, a massive stone remnant of the iron ore industry. To access the trailhead, you’ll need to walk south along Highway 278, past the information kiosk and sign-in area.

Once on the trail, frequent orange blazes mark the route clearly in both directions. Point A starts in a scented pine grove before meandering through swampy bottomland to the first steep climb. Most of the trail wanders along ridgelines through beautiful mixed oak forest, with occasional drops to the sunny, flower-filled bottoms, some of which are swampy due to an active beaver population.

At my favorite such point, about a mile before the second of three backcountry campsites, the trail opens up to a pond full of lily pads which quietly reflects the surrounding hills. It’s a great place to spot the pointed stumps left by enterprising beavers.

Our four month old is a bit young to fully appreciate the effort involved in chewing down a tree, but if you have slightly older critters along with you, it’s a great learning point. Though it has some challenging ups and downs, Zaleski is a good option for beginning backpackers or for kids. The few miles between campsites and multiple trail options — including the short 1.5 mile hike to the first campsite — take the pressure off mileage goals, and the potable water stations available at each campsite mean that distance runners and lazy hikers don’t have to carry as much water.

The first and second campgrounds can fill up on peak summer weekends, though there is plenty of space for overflow camping. But even then, the trail itself shows little sign of human traffic, leaving your mind free to identify songbirds, keep an eye out for pawpaw trees and other wild edibles, or meditate on just how many clean diapers are left in your pack.

Difficulty: Moderate-Difficult depending on distances
Directions: Set your preferred mapping device to Hope Lake State Park. The Zaleski trailhead is about a mile north of Hope Lake on Highway 278. Two hours from Huntington, W.Va., 1.5 hours from Columbus, Ohio
Note: Picking flowers is prohibited, but gathering other wild edibles such as berries, nuts and mushrooms is not.
Contact: Call Zaleski State Forest at (877) 247-8733 or visit forestry.ohiodnr.gov/zaleski