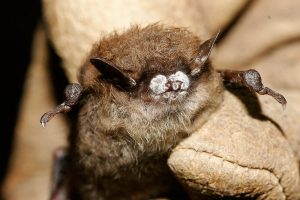 Since the first documented case of white-nose syndrome in New York state in 2006, the disease has killed more than 5.7 million bats in the eastern United States. The root of the disease, a fungus known as Pseudogymnoascus destrucans, has spread south and west over the past decade and can now be found in caves throughout Appalachia. In a few of these caves, 90 to 100 percent of the bats have died.

The disease drains bats of the energy reserves needed to keep their vital organs functioning during hibernation. A study released by the U.S. Geological Survey in January found that hibernating bats with white-nose syndrome used up essential fats twice as quickly as uninfected bats over the same period of time.

Scientists and researchers are desperately seeking ways to remediate the spread of the fungus and its effects on the twelve species of bats currently at risk. The U.S. Fish and Wildlife Service dedicated $14 million to white-nose syndrome research between 2008 and 2013, and the agency announced on April 23 that it will grant an additional $1.5 million to fund more extensive research.

A portion of these funds went toward developing an innovative method for screening bats: when placed under long-wave ultraviolet light, the wing-membranes of infected bats glow a fluorescent orange-yellow.

Until recently, a cure for this devastating disease seemed out of reach, but in 2012, researchers at Georgia State University made a promising discovery in the form of Rhodococcus rhodochrous, a bacterium that inhibits the growth of Pseudogymnoascus destrucans. Controlled experiments conducted over the past few years indicate that the bacterium, when placed in close proximity to the fungus, can prevent the disease from taking hold in bats, and can also slow its progression in bats that are already infected.

On May 19, a group of scientists and conservationists gathered outside a cave in Missouri to watch as the first 150 bats successfully treated with Rhodococcus rhodochrous were released back into the wild.

A colony of bats maintains an important ecological balance by consuming tons of insects every night. Mosquito populations would skyrocket without them, and so would the amount of harmful insects that plague the agricultural industry.