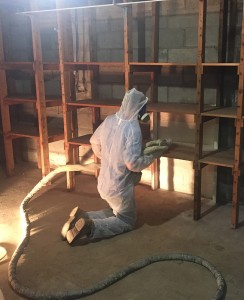 Burning fossil fuels to create electricity comprises the largest share of the nation’s carbon dioxide emissions, according to the Department of Energy.

From changing incandescent bulbs out for LEDs to adding insulation, energy efficiency measures not only reduce a home’s carbon footprint but also are the cheapest form of reducing reliance on fossil fuels. A whole-home retrofit can lower a utility bill by 20 to 40 percent. While those energy savings will pay for the efficiency upgrades over time, the upfront investment can be substantial.

For many low-income homeowners across the country, the DOE offers a weatherization assistance program that distributes funds through a local community action agency. Demand often exceeds capacity, however, and many homeowners are put on a waiting list for years.

Other homeowners may not qualify for this program but do not have funds or credit for home energy improvements, even if the upgrades are badly needed. In rural areas, such as much of Appalachia, these situations are especially true.

In eastern Kentucky, “often people have higher energy bills than their mortgage,” says Chris Woolery, residential energy specialist at Mountain Association for Community Economic Development. “They didn’t have an incentive to be efficient because fuel was cheap.”

Woolery works on MACED’s How$mart program, a model for electric cooperatives to finance energy efficiency upgrades for their members. On-bill financing allows a homeowner to secure a low-interest loan from their utility to pay for efficiency upgrades and then pay that loan back through their utility bill. Credit does not determine loan availability, and the program is structured so the bill is usually lower than before.

Projects around the region are taking advantage of clean energy, from a cooperative solar farm in southeast Tennessee to a small community in the coal-bearing hills of eastern Kentucky. Read more here.

As of summer 2015, How$mart has funded 189 retrofits across four cooperatives in eastern Kentucky. Jeff Gulley of Flemingsburg, Ky., was one of the first program participants. His attic and crawlspace were sealed and insulated with spray foam, and he also received a new thermostat and heat pump.

Gulley discussed his retrofit in a promotional video about How$mart. “From November to February, it took everything we had to pay our heating bills,” he said of the winters before he received the retrofit. “This program is one of the best things — as a homeowner — that has happened to me.” The total savings of the energy upgrades on Gulley’s bills are estimated at $102 per bill, and after the loan payment, he still pockets $16 a month.

In February, Roanoke Electric Membership Corp. launched its own on-bill financing program in eastern North Carolina. The cooperative is one of the first to use the Department of Agriculture’s Energy Efficiency & Conservation Loan Program funding to back the loans, but must assume the financial risk if a homeowner defaults on their loan payments.

Risk is a serious consideration for rural electric cooperatives that rarely have the funds to cover defaulted loans without passing that cost along to their members. In order to avoid disconnecting electricity when a homeowner defaults, some cooperatives are looking elsewhere for financial security.

The Home Energy Loan Program in Arkansas uses DOE funding to cover defaulted loans. Tammy Agard, who formed HELP, is working to implement it on a large scale. She is building a directory of reliable contractors and teamed up with Rob Moody, a software designer, to create an interactive smartphone application that shows day-to-day energy savings and alerts homeowners when their energy usage is above average.

Moody and Agard are currently fundraising for this developing project. “We think real results is what’s going to make this industry take off,” says Agard. Moody says the software could also monitor cooperatives’ carbon offsets from the retrofits, which will help them meet new U.S. Environmental Protection Agency regulations.

In a region that hosts a waning coal industry, energy efficiency spurs economic development. How$mart has provided 11 jobs for Kentuckians, and Woolery was recently told that the program allowed a contractor to make three new hires. In Arkansas, HELP spurred 27 new jobs in just two years. “[Right] now that’s just a drop in the bucket, but can you imagine this at scale?” says Agard.

Appalachian Voices is promoting energy efficiency and on-bill financing in the region. Learn more at appvoices.org/energysavings and watch a video about the need for energy efficiency in the High Country of North Carolina.