It sounds perfect: enter a laboratory, change one quality of a food crop through genetic technology, and walk away having created a “miracle” food source to help feed the world. This new crop might eradicate the need for destructive or unsustainable farming practices, or it could make farmland more productive by packing crops together more tightly, ultimately alleviating global hunger. You’ve probably heard the name of this technology before: genetic modification. 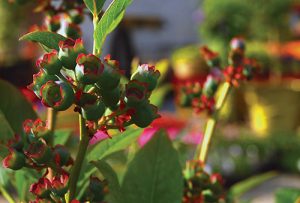 It’s impossible to tell whether food such as these local blueberry plants is GMO-free just by looking at it. Photo by Valerie Bruchon

In 1996, when genetically modified foods entered the U.S. market, well under 10 percent of domestically grown corn and soy — the country’s two biggest crops by far — was genetically modified. Now, roughly 90 percent of these crops are genetically engineered. Much of this 90 percent is fed to livestock, which often ends up on our plates as meat. Most processed foods in the United States also contain some sort of corn or soy product.

Most of the engineering performed on corn and soybeans is intended either to make crops “immune” to the herbicides that are sprayed to kill weeds, or to make crops inedible to insect pests. This, advocates say, may decrease the need for chemicals that could potentially infiltrate water supplies or food. Yet over time, some of these undesirable weeds and insects have evolved a resistance to the substances — either in herbicides or produced by engineered crops — meant to kill them.

The effectiveness and safety of genetically modified organisms are still debated. The U.S. Department of Agriculture and the Food and Drug Administration oversee GMO foods in the United States, so in theory, the ones that reach the market are safe. But often the research that informs GMO laws is funded by biotechnology companies themselves, especially at universities, where corporations dominate the funding of GMO research. “Big corporations are paying the land-grant colleges to do research,” says Tennessee State Senator Frank Niceley. “And unfortunately, they’ll prove what you pay them to prove.”

Since 1990, any food sold in America and labeled “organic” may not contain any genetically engineered ingredients. But so far, U.S. organic-labeling laws can be applied only to domestically-produced foods, which make up roughly 80 percent of the American diet. The remaining 20 percent is imported, from any combination of about 150 countries, which may have virtually untraceable supply chains and few labeling laws.

Genetic Technology on the Appalachian Table

Appalachia may be affected by genetically modified organisms in unique ways. The region has a distinct agricultural heritage and also faces a slew of health issues, including poor nutrition and obesity in children. “The best way to keep health-care costs down is teaching kids to eat healthy,” says Niceley. “But with current labeling laws, it’s hard to know what you’re really feeding your kids. And if things don’t kill people immediately, new [GMO] products can out-advertise healthier, more traditional ones.”

According to Jim Hamilton, director of Watauga County Cooperative Extension in North Carolina, “The loss of genetic diversity in crops [nationally] is a bigger deal than genetic modification itself.” He explains, “we’ve narrowed our varieties — with corn or soy, or even tomatoes — because the big companies are dictating prices, based on the types they can produce most cost-effectively.” 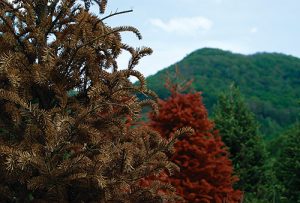 Stands of frasier fir Christmas trees, a major crop of western North Carolina, can be devastated by root rot fungus. Genetic modification may hold promise for breeding resistance in the trees. Photo by Valerie Bruchon

Niceley shares similar concerns. As he puts it, “In agriculture, you can’t put all your eggs in one basket. Just like you don’t want one outfit furnishing all the seed and all the herbicide, you don’t want just one crop, or only one breed. To keep people healthy every day, and also if a disaster occurred, you get resilience and strength through diversity.”

Compared to areas of the United States that are dominated by one or two crops, Appalachia’s agricultural heritage is diverse. Appalachia has a wide variety of local climates and terrains, which make growing large areas of just one crop economically infeasible. Also, early interactions with Native Americans endowed Appalachian settlers with a rich variety of heirloom foods, strains of which have been locally preserved. These factors result in Appalachia’s patchwork of specialty crops, from blueberries to winter squash. The region has also seen an unmistakable rise in the production of non-GMO foods: now, roughly 33 percent more Appalachian farms are growing at least one non-GMO product than twelve years ago.

Since 2013, lawmakers in Tennessee, Kentucky and West Virginia have introduced GMO legislation, currently under review, that aims to require the labeling of GMO foods sold in those states. And in May, Vermont passed the nation’s first GMO-labeling law. Niceley, a Republican who is known for his outspoken persona, has been spearheading similar attempts in Tennessee. This bill would mandate that “genetically engineered food products sold in Tennessee must contain a label plainly visible on the display panel that conspicuously contains the words ‘genetically engineered.’”

Niceley explains that he was raised on his great-grandfather’s farm and continues to cultivate his family’s relationship to the land. “I have three daughters who are [very serious about their food], and we raise pastured beef, free-range chickens, heirloom cornmeal and grits, and more,” he says. With an education in soil science, and family members who worked in nursing and medicine, Niceley looks at GMO issues from both agricultural and nutritional standpoints. “Healthy soil leads to healthy plants, and then eating those plants keeps us healthy,” he states. But, he says, referring to the fact that many GMOs are designed with only one goal in mind — usually crop yield — “with GMOs, the nutrition just isn’t there. It looks like a bushel of corn, but doesn’t have the protein or the minerals. For ethanol or high-fructose corn syrup, [GMOs are] just as good, but for food-grade uses, no.”

But Brian Chatham, conservation technician at the Watauga County Soil and Water Conservation Office, has different reservations. “I don’t have a problem with right-to-know labeling, but if it elevates other costs like marketing, there could be problems further on down,” says Chatham. “We deserve to know what we’re eating, but at the same time, everything is not as bad as the media makes it sound.”

To speak plainly, this is not a straightforward issue. Some well-respected associations — for example, the American Medical Association and the U.S. National Academy of Sciences — state that they believe GMOs to be safe. Perhaps conservative use of genetic engineering, coupled with innovative uses of traditional farming practices, can reduce the concentration of agricultural chemicals in our water supply. And GMOs could help sustain agriculture in communities with harsh growing climates, where the next meal is never guaranteed.

On the other hand, GMOs have not been a significant presence in human diets for very long. Fifteen years, give or take, is just a blip on the radar when determining longer-term effects on human health. And increasingly, weeds, pathogens, and insect pests are displaying resistance against the very technology that was designed to render them harmless. These emerging patterns may hint that no technology can permanently outsmart evolution in nature.

A sweeping ban on GMOs may be extreme. Yet, as with any technology at the frontier of science – and especially one that is being applied to billions of people — it will likely prove wise to think about the possible outcomes. Referring to a common gene in GMO crops, Niceley says, “The [Bacillus thuringiensis] gene is in everything now, and it’s just too early to tell what it’s gonna do to us […] Science is so much smarter now — there is so much information out there, but nobody is sitting down and looking at the big picture.”