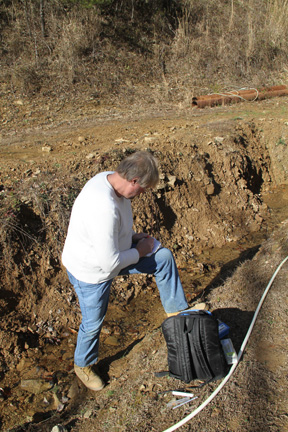 Rick Handshoe tests the conductivity and pH of a stream adjacent to his home in January. Photo by Molly Moore

For Rick Handshoe, the trouble started in the mid-nineties, when coal mining began near his father and sister’s homes and his sister lost use of her well.

Since then, six wells – including the one dug by his ancestors — have dried up or been contaminated with explosive levels of methane on property that’s been in his family for over 200 years. Handshoe’s problems accelerated when mountaintop removal coal mining reached his hollow in the mid-2000s — now his homeplace is surrounded on three sides by massive surface mines and polluted water.

Things are getting worse. Over the past few months, seeps of toxic water spouted from the slope 500 feet above his home, and Handshoe discovered a landslide near the top of the mountain. He worries that the mountain might tumble down around him, and since January he’s been seeking answers.

The federal Office of Surface Mining has said Handshoe doesn’t face imminent danger. But he isn’t giving up. A self-taught watchdog with 20 years of experience, he’s picked up a few techniques.

1. Seek authority
Handshoe planned on building his dream house on a piece of family property along Raccoon Creek, a shaded brook where he caught minnows as a child, and passing down that home to his daughter. Now nothing lives in the stream — when one of his neighbors added creek water to a stocked fishing pond, he said that the water “boiled the fish alive.” Handshoe is removing his bow-hunting stands from the property because his doctor advised him not to eat anything that might have drunk water on his land.

After years of back-and-forth with regulators, the mountaintop removal mine at the creek’s headwaters installed a treatment pond for mine discharge. Still, Handshoe has documented a number of occasions where water the color of orange juice fills the creek.

Frustrated with agency responses that ranged from tepid to non-existent, Handshoe joined anti-mountaintop removal activists for a sit-in at the Kentucky capitol in February 2011. Governor Beshear toured the creek that spring, though his visit wasn’t a cure-all. Handshoe reported more pollution violations in the creek following the governor’s visit.

Not one to back down, Handshoe also attributes some successes — such as getting the coal company responsible for his dad’s lost wells to pay his water bills — to one-on-one audiences with members of Congress and high-ranking state and federal officials.

Handshoe says going up the chain of command takes time and tenacity, but he’s found it hard to get state and federal agencies to enforce the law without speaking to the person in charge.

2. Persistence Pays
A lively perennial stream rushes down the mountainside two feet from the exterior wall of Handshoe’s daughter’s bedroom. The stream appears as a blue line on U.S. Army Corps of Engineers maps, and the restrictions surrounding surface mining near perennial streams have protected a portion of land immediately behind Handshoe’s home from mining. But that creek wasn’t always on the map.

Handshoe meticulously documented stream flow through summer drought and winter cold for two years before the Army Corps acknowledged the unnamed creek’s existence. “They’ll name it Two Years Long or something like that, because of how long it took me to do that,” he jokes. 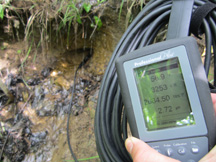 In May, a water quality reading on one of the seeps that popped up on Handshoe's property revealed a pH of 2.72, which is slightly less acidic than lemon juice. Photo by Eric Chance

“Pictures don’t lie,” Handshoe says. “When the dust is rolling and the water’s orange and the water’s gray, you don’t have to say anything. The pictures tell the stories.”

In addition to his trusted camera, Handshoe owns the same water testing equipment as state inspectors, and he tests his water weekly for conductivity — a measure of how water conducts electrical current that can indicate the presence of pollutants — and pH, which measures the level of acidity. His water tests on the seeps that formed above his home this spring showed a conductivity level of 4,200 — far above the 500 that the U.S. Environmental Protection Agency says indicates an impaired Appalachian stream.

If Handshoe gets results like that, his allies help pinpoint the problem. Appalachian Voices, the publisher of this newspaper, sent water from the seeps to an independent lab in May and found several heavy metal exceedances, including levels of aluminum 100 times greater than fresh water standards.

“After you get beat to death here a few times you learn to collect enough evidence and say, ‘You guys have to do your job, and I’m proving that you’re not,’” Handshoe says.

4. Friends Matter
Rick Handshoe isn’t the only resident of his hollow whose life has been changed by the toxicity of his surroundings. Lowell Shepherd has lived alongside Raccoon Creek since 1967 and remembers when kingfishers flocked to the creek and he dug freshwater “bowls” in his yard for his dog. Like Handshoe, he now waits for rain instead of watering his garden with the creek. Since 2011, Shepherd has monitored a rain gauge and kept careful records to help Handshoe corroborate the amount of rainfall with his testing results and coal company discharge reports.

Shepherd’s reason is the same as Handshoe’s. “I’d hate to see everything destroyed in this area where I’ve lived my whole life,” Shepherd says.

5. Be Proactive
Handshoe doesn’t see a good outcome arising from his current troubles. Regardless of whether or not the toxic seeps and slope instabilities are attributed to the coal mines above his home, the place where he hoped to live is damaged. But his struggles have given him a clear message.

“It’s hard to get people to understand that you need to be testing and documenting your good water,” he says. “The more documentation you have, whether its mining, or drilling gas wells, oil wells, you need documentation that that water was good. That’s where they really can pound you. They’ll just say, ‘Well, the water never was good there.’”

“You may not think that you’re doing any good, but it may be 10 years before that data’s needed,” he continues. “I can guarantee that at some point someone will be thrilled that I jumped out and ran down to a hollow [to test water] right below their house.”