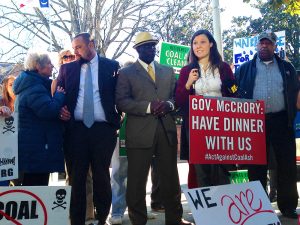 In North Carolina, a remarkable coalition of citizens directly impacted by coal ash is proposing a better path forward, one which will force Duke Energy to clean up its decades of toxic coal ash without dumping it on any other communities.

The Alliance of Carolinians Together Against Coal Ash formed in late July, and since then, the group has brought public attention to the need for proper coal ash cleanup. ACT Against Coal Ash has also created a space for residents whose health, water and homes have been harmed by Duke’s coal ash to find solidarity and support. Appalachian Voices was integral to the formation of the Alliance and we continue to co-facilitate ACT and work with partners to include more affected communities.

ACT Against Coal Ash started off the new year by releasing a set of unifying principles that call on Duke Energy and North Carolina decision makers to put the people most impacted by coal ash first. The principles demand transparency and effective coal ash cleanup that keeps the ash on Duke’s property instead of moving it to new communities. The principles also insist that Duke’s neighbors be permanently supplied with safe drinking water and be compensated for lost property values and health care costs, along with other common sense demands.

In March, the N.C. Department of Environmental Quality will hold public hearings near coal ash sites across the state. Read more about the Alliance at ACTAgainstCoalAsh.org and find out how to join us at the upcoming public hearings at AppVoices.org/coalash/hearings.