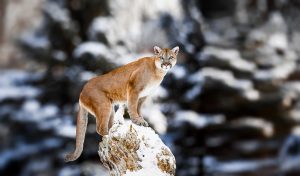 A phantom haunts Appalachia. Blurry trail camera pictures and occasional eerie screams in the forest keep the debate about the Eastern cougar’s existence alive among scientists and lay people, even after the U.S. Fish and Wildlife Service unoffically declared the elusive ghost cat extinct in 2011. This was followed by an official proclamation in 2018.

The Eastern cougar, Puma concolor cougar — also known as ghost cat, catamount, puma, painter, panther and mountain lion — once roamed Eastern North America from Canada to Florida. All but the Florida Panthers were wiped out by the early 1900s. Hunting by European settlers, loss of habitat and a decline in the white-tailed deer population — the cougar’s favorite meal — all played a part in its demise.

Myths surround these tawny predatory cats, which can grow up to 8 feet long and weigh in at 200 pounds. One is the notion that they are man killers. The truth is, a fatal accident with a white-tailed deer is many times more likely than a fatal cougar attack, according to The Journal of Wildlife Management.

“The chance of a cougar encounter is incredibly rare, much less, a fatal attack, even where there are established cougar populations,” says Joy Sweaney, a wildlife biologist with the Tennessee Wildlife Resources Agency.

Cougar sightings east of the Mississippi River often turn out to be misidentifications of other wild animals or house pets, wandering western cougars, or captive cats that have escaped or been released. Ironically, whether or not the Eastern cougar ever existed as a separate subspecies is now a subject of scientific debate. The question of a distinct genetic profile, or even whether the cat is extinct or not, does not impact their protected status, however; hunting or trading any native species is still illegal unless a state management policy says otherwise.

• These unspotted, light brown to tawny cats range from 5 to 8 feet long and weigh 100 to 200 pounds, with a tail one third the length of its body.
• It’s impossible to visually distinguish an Eastern cougar from any other subspecies of cougar.
• Female cougars bear one to six kittens after a three-month gestation. The cougar lives approximately 12 years in the wild.
• The cougar’s vocalizations include screams, hisses, whistles and growls.
• Cougars can leap 15 feet.
• Established breeding populations of the North American cougar remain in western North America and South America.

Wildlife agencies in southern and central Appalachia receive a number of reported cougar sightings every year, which often turn out to be misidentifications or deliberate hoaxes. There have been some confirmed sightings, however, including a widely publicized 2014 report from a farm in Bourbon, Ky. After the farmer’s neighbor called the Kentucky Department of Fish and Wildlife, an officer from the agency shot the cat, believing it posed a threat to the public.

Mark Marraccini, information officer at Kentucky Department of Fish and Wildlife, doesn’t believe the Bourbon cougar arrived in the state on its own. According to Marraccini, the cat was too well fed to be wild and probably escaped or was released by its owner. DNA tests were withheld while a criminal investigation for illegal trade was underway, fueling a long-standing theory that state agencies have covered up evidence of cougars in the region. Doug Markum with Tennessee Wildlife Resources Agency says the conspiracy theory is really just a matter of miscommunication.

“When somebody asked us about cougars, we didn’t say, ‘They’re not here,’” Markum says. “We said, ‘There’s never been good evidence that cougars are here.’ And then they misconstrue that to say, ‘The agency said there are no cougars here.”

DNA testing later revealed that the Bourbon cougar traced its genetic origin to the Black Hills of South Dakota.

Recent sightings have been confirmed in Obion, Humphreys and Carroll counties in western Tennessee. DNA tests from a fur sample show that the Carroll County cougar is a female, also with genetic origins traced to the Black Hills in South Dakota and Wyoming. Biologists believe it is possible that all three sightings are the same cat migrating further east. 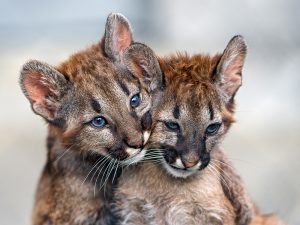 Does the recent increase in sightings mean that a breeding population of cougars may one day inhabit Appalachia? Many folks hope so, including Tennessee State Park Ranger Tim Pharis.

“The way I look at it, if there are any resident cougars, they’re probably the ones that are wise enough to stay away from people,” Pharis says. “If there aren’t, this ecological niche is open. If they’re in West Tennessee, they’ll probably eventually be here, too. It’s just a matter of time.”