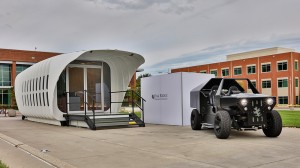 The 3D-printed home and vehicle sit on display at Oak Ridge National Laboratory in East Tennessee.

Additive manufacturing, more commonly known as 3D printing, has been on the rise in the past few years. With its near-endless customization at the touch of a button and its ability to create highly complex products that would be impossible using traditional methods of production, it’s easy to see why.

Tucked in the hills of Oak Ridge, Tenn., Oak Ridge National Laboratory has been on the cutting edge of this technology for several years. After unveiling their fully 3D-printed Shelby Cobra sports car at the 2015 Detroit Auto Show, a project that took only six weeks from conception to finish, researchers at the nation’s largest national laboratory revealed their latest venture last fall.

The Additive Manufacturing Integrated Energy demonstration project, or AMIE, was conceived in August of 2014 and features a unique pairing of 3D printing and wireless energy transfer between a vehicle and a building.

The 3D-printed single-room building, primarily powered through solar panels on its roof when detached from the grid, is accompanied by a 3D-printed vehicle powered by a hybrid natural gas engine.

What makes the pair special, however, is the capability for energy to wirelessly flow between the two.

This means the vehicle can charge its battery through the building’s solar panels, and the 210-square-foot building can tap into the vehicle’s natural gas engine during peak usage hours or when solar energy is unavailable. Any excess energy from the solar panels or vehicle can be stored in a battery onboard the building. And thanks to super-efficient vacuum-insulated panels inside the walls, the building can be insulated against the elements using supplies a fraction of the size of other insulation materials. 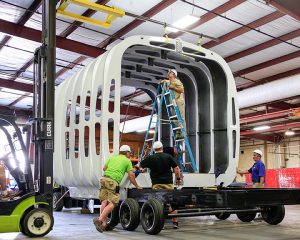 To Dr. Kaushik Biswas, a member of the research and development staff at Oak Ridge National Laboratory and a participant on the AMIE project, this contributes to one of the biggest benefits of the project: the minimal amount of materials needed.

“If and when we are able to make this technology commercially available, there will be little to no construction waste,” says Biswas. “Customization is a big advantage for 3D printing.”

According to Biswas, with traditional construction practices much of the materials brought in are wasted because they have to be cut to size. With 3D printing, however, the material doesn’t have to be cut to size because it comes in a powdered state, meaning the operator can measure out exactly how much product is needed and transport it with ease. Researchers suggest that several years down the road this powdered material could even be made out of native biomaterials, eliminating the need for transporting supplies altogether.

“If we can reduce transportation costs by only sending a printer and using materials on site, that would be a huge benefit,” says Biswas. “In the future, this could be used for an operating base [off-planet] where all we have to do is send a 3D printer to the site, possibly even using indigenous materials.”

With the price to send materials to space costing thousands of dollars per pound, this has the potential to drastically reduce the cost of future space missions to the Moon, Mars, and beyond.

Closer to home, AMIE has the potential to be used to provide homes and vehicles in remote locations and developing countries, where the power grid is often unstable or nonexistent. These ideas lend themselves to the primary advantage of AMIE: collaborative innovation.

“This project was not just about 3D printing, but about the concept as a whole,” says Biswas. “I think what AMIE does is allow us to think about different ways of solving problems and overcoming challenges.”