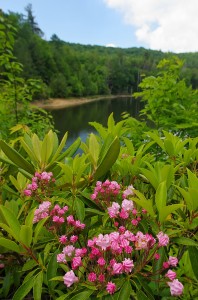 I arrive at the Lower Higgens Creek trailhead with a dozen other hikers, ranging from an 8-year-old to some with many miles and years to their credit. The jovial banter of Ranger Tim Pharis, Ranger Naturalist Marty Silver and State Naturalist Randy Hedgepath of Tennessee State Parks enlivens our group. This First Day hike on January 1, will take us 2.7 miles to the 100-foot Big Falls on Lower Higgens Creek and Birchfield Camp Lake, a small, man-made lake sitting at 4,000 feet above sea level.

“The name Birchfield Camp comes from the old logging camp that was up here, named after the Birchfield Logging Company,” Pharis says. “The lake was built to suppress wildfires.”

After large-scale logging operations ceased in the 1960s, the 10,000 acres of the Cherokee National Forest known as Rocky Fork remained undeveloped. A decades-long saga, rife with drama and even some intrigue between private sector developers and an alliance of government agencies and activists, ended in 2012 with the land secured for public ownership and enjoyment within the Cherokee National Forest. Rocky Fork State Park, now in development, occupies 2,000 acres of Rocky Fork in Unicoi County, Tenn. The remaining 8,000 acres span portions of Unicoi and Greene counties. 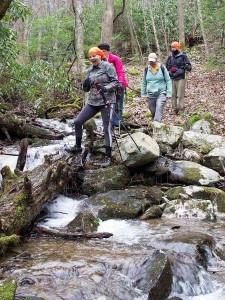 We start up the remnant of an old logging road, coming to a gravel parking area after about a third of a mile. Hedgepath spots a putty root, a wild orchid with pin-striped leaves. It was traditionally used to seal windows, he says. According to Ranger Silver, Rocky Fork harbors several unique species of orchids and rare trilliums, around 80 species of mosses and liverworts, and rare salamanders including the Yonahlossee, a large, black salamander with a distinctive rusty blotch on its back.

Roughly a mile into our hike, the sound of flowing water grows to a roar and we stop at Big Falls. A steep but short path drops off dramatically to the right, descending to the foot of the falls. The recent rains have swelled the normally tame 100-foot cascade into a foaming cataract. Most of the group makes their way down the slippery path with the help of a safety line secured from top to bottom. We take pictures amid the spray, then climb back up to the trail.

We make the first of several creek crossings a short distance later. After the second creek crossing, the trail veers from Lower Higgens Creek and follows Birchfield Camp Branch, fed by the lake above.

The mood is mirthful, despite the dropping temperature. After more creek crossings, we ascend the steepest segment of the trail and come upon the rusted bones of an ancient logging truck. We explore its remains wondering how it met its demise between the trail and the creek. 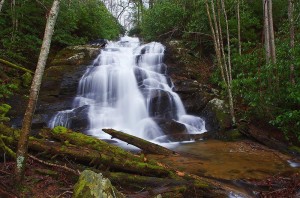 The creek sliced through the mountain long before loggers cut a road alongside its path, so narrow that it’s hard to imagine logging trucks descending with their pillage.

The last stretch takes us past a couple of caves to the right and then we see the lake, surrounded by white pines and mountain laurel. It’s small, but the beauty of the scene is augmented by the exhilaration of reaching it. Rumor has it that it’s a popular dining area for local bears, with frog legs being a favorite dish. We all sit down to dine on our lunches, and some stroll along the .75-mile loop around the lake. No bears in sight, just a lone turkey hunter ambling through. On a warmer afternoon, it would be hard to leave, but a raw chill is seeping through our layers and there are some wet feet from crossing creeks. We head back down the trail in the waning light of 2016’s first day.

Difficulty: Moderate to strenuous with some challenging creek crossings

Directions: From I-26, take exit #43. Turn right onto 19/23. After .75 mile, turn right onto Lower Higgins Road, which will end at a small parking area. Groups can park at the I-26 Welcome Center and carpool.

More info: “Rocky Fork: Hidden Jewel of the Blue Ridge Wild,” a book by local conservationist and photographer David Ramsey, will be available in spring 2016 through daramseyphotography.com