Climate in the Classroom 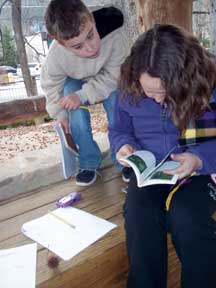 To learn about how schoolyard trees respond to the changing seasons, students also have to identify tree species in this after-school activity. Photo courtesy of Pi Beta Phi Elementary

Science educators might have welcomed a new attempt to educate America’s youth about climate change if the organization that plans to develop the curriculum, The Heartland Institute, wasn’t known for denial of accepted climate science. Several months after the documents were exposed, Heartland unveiled a series of billboards equating anyone who accepts climate change science with “Unabomber” Ted Kaczynski and other unsavory figures.

According to one leaked document, the institute plans to create a curriculum promoting the idea that human activity contributes to climate change is “a major scientific controversy,” in direct conflict with nearly 97 percent of active climate scientists who agree that the climate is changing and that human activity is a significant cause.

Direct classroom pressure from groups such as Heartland is just one of many attempts by supporters of the energy industry to stymie climate change education. In another case, environmental organization Greenpeace used a Freedom of Information Act request to discover that ExxonMobil was funding climate change skeptics as recently as 2010, despite a slew of ads promoting increased math and science education and a 2008 pledge to stop funding deniers of global warming.

Some state governments have also cast a shadow over established science curriculum. This year, Tennessee became the second state to pass a law that brings critiques of topics such as evolution, climate change and the chemical origin of life into the classroom.

With powerful interests acting against climate change education, it’s no wonder a National Science Teachers Association poll found that 82 percent of educators have faced skepticism about the subject from students and 54 percent have faced skepticism from parents. Still, the scientific and science education communities overwhelmingly accept that climate change is real and that part of science education is informing students about that reality.

In fact, Dr. Melinda Wilder, an Eastern Kentucky University professor who specializes in science education, has been bringing climate change science into her work since the mid-nineties, she says, by letting her students “find evidence and then talk about what that evidence means.”

For teachers, finding reliable classroom materials can be a barrier to effective climate education, especially since tight school budgets and time-strapped schedules encourage teachers to look to outside sources for lesson materials. Filling that need, the American Coal Foundation paid Scholastic, Inc. — a well-known provider of educational materials and textbooks — to develop and distribute a set of lessons dubbed the “United States of Energy.” With the aid of Scholastic, the lesson plan reached at least 66,000 fourth-grade classrooms in 2009, according to a blog post by the coal foundation. But once the biased source of the curriculum gained attention in the national press, Scholastic withdrew the lessons.

In an article in the activist educational magazine Rethinking Schools, editor Bill Bigelow noted that the coal foundation’s materials claim to meet national education standards for fourth grade, and specifically purport to teach about the advantages and disadvantages of different types of energy. But Bigelow writes that the curriculum fails to mention the health or environmental problems tied to coal, or the fact that burning coal is the greatest contributor to greenhouse gases. “True, a full exploration of these ‘disadvantages’ of coal might overwhelm 4th graders—or anyone else, for that matter,” Bigelow’s article says. “But the alternative is not to leave them out entirely and, thus, turn coal into an energy superhero.”

According to Eastern Kentucky University’s Dr. Wilder, some material from the American Coal Foundation can be useful if presented in context. For example, she says, students in Appalachia often assume that their region produces most of the country’s coal, a misconception that is countered by a “United States of Energy” activity that asks students to use a map to identify the top 15 coal-producing states. Wilder notes that just because one activity has merit doesn’t mean that it provides thought-provoking follow-up questions or that other lessons are accurate.

“Teachers have to look at curriculum materials critically,” she says.

Presently, there are no uniform standards for teaching climate and energy in the Southeast. Still, proponents of teaching about climate have reason to be optimistic. A first draft of new voluntary national standards, called Next Generation Science Standards, was released last spring, and a second draft will be available for public comment this fall. The first draft contained upgrades such as a high school section about managing human impacts on the planet, including the effects of greenhouse gases.

Simply including climate science in the state education standards does not necessarily lead to quality instruction. “Most of the time the earth and environmental science courses are not the high-stakes testing courses … It might be on the books but that doesn’t mean it’s being taught,” says Karen McNeal, a principal investigator at Climate Literacy Project of the Southeast.

To help teachers find effective climate lessons, the Climate Literacy Project has gone through 100 lessons and matched them with science standards in southeastern states to create a publicly searchable database. All the lessons have been peer-reviewed by educators and scientists with the national Climate Literacy and Energy Awareness Network, so educators can easily find a lesson that meets their needs.

Searching for eighth grade coursework that meets Kentucky education standards? The database pulls up 64 results, ranging from a mock oil-spill activity that studies the effectiveness and cost of cleanup methods to an exploration of how colors at the earth’s surface affect the amount of warming.

Quality learning begins with a teacher who is comfortable and enthusiastic about the subject at hand. John DiDiego, education director for the Great Smoky Mountain Institute at Tremont in Townsend, Tenn., organizes climate change workshops for educators. Depending on state and grade level, teachers might not be required to teach about climate change, but DiDiego says those lessons can be tied into other subjects.

“[Climate change] certainly fits in with a lot of what they’re trying to teach, but the teacher has to make that connection,” DiDiego says. “It could be a math problem related to ‘how much carbon does a certain tree species of a certain size sequester?’ So the kids can go out and make measurements. It’s all about math, but the end result is learning about carbon sequestration.” 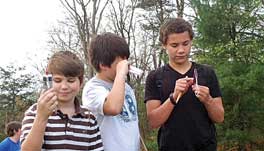 DiDiego says that teachers who attend the institute’s workshops consistently say they need access to current, reliable information about climate change and its regional and local impacts. He notes that the consequences in the Southern Appalachians are not predicted to be as dramatic as in other parts of the country, and that communicating those subtleties to a classroom can be difficult.

To make the global issue tangible, the workshops advise teachers to look at impacts on creatures such as salamanders. Appalachia is a diversity hotspot for these lungless amphibians, which depend on narrow ranges of precipitation and temperature and are at risk from habitat loss.

Making chemistry concepts visual is another challenge, says Erika Schneider, a former classroom teacher and current outreach coordinator for Sundance Power Systems, Inc., a North Carolina renewable energy company. When she talks to high schoolers about carbon dioxide, she initiates a chemical reaction so they can actually see the normally invisible gas and compare the amount of carbon dioxide in ambient air to the amount in a human exhalation or the amount released from a car tailpipe.

Just outside the home or classroom, climate lessons are constantly unfolding. Over time, studying seasonal changes such as when trees bud or lose their leaves and when migrating birds arrive can reveal the “fingerprint of climate change,” says DiDiego.

Students at Pi Beta Phi, a public elementary school in Sevier County, Tenn., are monitoring how the changing seasons affect 22 trees near their school. Pi Beta Phi has a lengthy partnership with Parks as Classrooms, a National Park Service initiative that encourages teachers to use national parks as places to facilitate learning about cultural and natural resources. At the school, students begin talking about the idea of climate as early as second grade.

By the time students reach sixth grade, they have a good understanding of the underlying science, says Melissa Crisp, the school’s Parks as Classrooms coordinator. In addition, students here “have grown up in this environment of looking at things open-mindedly and broadly,” she says. Sixth-graders debate topics such as the effects of coal plants on climate change and the merits of various types of energy. They head out to a nearby overlook and take weather samples; when they return to the classroom, it’s time for statistical analysis.

What students do with the knowledge they uncover is up to them. Karen McNeal of the Climate Literacy Project of the Southeast simply wants students to be informed.

A quick survey of major fossil fuel foundations reveals that most also dabble in crafting energy-related teaching materials. In Appalachia, one of the most prominent is a nonprofit called Coal Education Development and Resource, Inc., a group with the mission to “facilitate the increase of knowledge and understanding of the many benefits the Coal Industry provides in our daily lives.” The organization provides cash awards to teachers who develop superior lessons about coal; award-winning curriculum includes lessons on subjects such as geology and mine safety, but also includes materials created by industry groups such as Friends of Coal.

A coloring book distributed by Friends of Coal shows smiling kids on the back page with a speech bubble that exclaims, “Coal is necessary in our energy future!” The workbook addresses “Coal and our Environment” with a cartoon of a cheerful dog washing coal, smiling scrubbers in action, and kids planting fir trees atop a former surface mine. Topics such acid mine drainage, slurry impoundments leaching toxic metals into groundwater, and poorly reclaimed mine sites are not included in the coloring book.