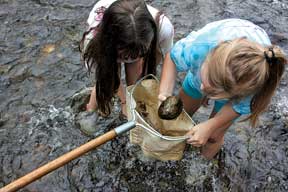 It’s 9:30 a.m., and the sun has yet to offer its full warmth to the fifth-grade class clustered along the bank of the North Toe River in Spruce Pine, N.C. Several students warily eye the chilly current and one girl pulls her arms into her sweatshirt, insulating herself from the cool morning.

But any trepidation vanishes as the U.S. Fish and Wildlife Service’s Gary Peeples starts them on a Waterbug Safari, an activity that explores the river’s creepy-crawly inhabitants. Within minutes, the kids are sloshing around, scooping water samples and bringing live creatures to a nearby table. One student catches a baby dragonfly and the group learns that it “takes water in through its mouth and squirts it back out of its butt.”

Activities like this are a classic example of get-your-feet-wet environmental education. There are no dire warnings about the ecological perils of disturbing the riverbed, and when a student brings an Asian clam to the table, “Those are bad because they’re not from around here” provides an introduction to the problems of invasive species. The details can wait — today’s goal is to facilitate interest in the water cycle, and the river is just feet away.

“Who’s having the best day of school in their entire life?” Peeples calls out. Every hand shoots into the air. 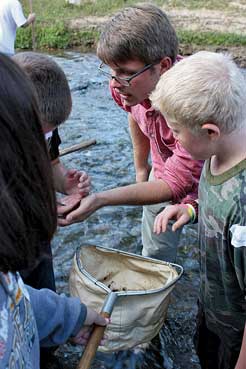 Byron Hamstead, a U.S. Fish & Wildlife Service intern, helps students in another county identify stream insects during a morning of outdoor education activities. The types of insects in a river can be a useful indicator of water quality. Photos by Gary Peeples/USFWS

Curiosity about the natural world has been a part of childhood education long before President Nixon passed the first National Environmental Education Act in 1970. But encouraging students to understand ecosystems and their role in them has never been more imperative.

A ten-year study published in 2005 found that although most American adults were aware of simple environmental issues, their understanding of moderately complex environmental and energy topics was downright abysmal. According to the study, forty-five million Americans thought the ocean was a source of fresh water. Just 12 percent passed a basic energy awareness quiz. Perhaps most sobering, the researchers estimated that only one or two percent of the population were capable of investigating and making decisions about complex natural-resources issues.

The problem with environmental education isn’t lack of public support. According to the study, ninety-five percent of Americans stand behind learning about natural systems and about 85 percent believe that studying the natural world builds character, enhances science learning, encourages community service and creates more environmentally-aware adults.

But even memorable learning experiences such as the Waterbug Safari run up against familiar obstacles: tight school budgets, the dominance of standardized tests, and overburdened teachers facing these challenges.

Some teachers counter these hurdles directly. Kelly Chapman teaches fifth grade at Deyton Elementary in Mitchell County, N.C., and every year she finds a grant to supplement classroom curriculum with experiential instruction methods. “I’ve become a different teacher from being able to have the hands-on material,” she says. “I’m a hands-on learner myself.”

Her students participate in the Waterbug Safari as part of the annual Toes in the Toe Watershed Discovery, a program comprised of six activity stations for all fifth graders in a two-county region. The workshops meet state education guidelines, and because the event is sponsored by the U.S. Fish and Wildlife Service and local environmental group Toe River Valley Watch, it’s affordable for schools.

Organizations dedicated to outdoor learning play a role as well. Ryan Olson, executive director of nonprofit program Muddy Sneakers, is optimistic about the future of environmental education. His outlook is buoyed by federal initiatives such as President Obama’s America’s Great Outdoors initiative and bi-partisan efforts to pass the No Child Left Inside Act, a bill that would give states incentives for prioritizing environmental topics and outdoor experiences in schools.

According to Olson, now is the time for advocates to ensure that state-level plans are applied in a way that stays true to the movement’s outdoor, hands-on roots.

Classes participating in Muddy Sneakers commit to at least six outdoor-learning “expeditions” each school year. Most are on publicly or privately protected lands within a half hour of the school, which exposes kids and their families to nearby natural treasures, and a few expeditions take place in the schoolyard, engaging youngsters with their immediate surroundings.

Once outdoors, students embark on activities such as trying to insulate boiling water in the woods to learn about energy conservation, and talking about how that heat relates to energy sources such as camp stoves and the sun. Add in a perk like brewing pine needle tea, and it’s hard to imagine that a multiple-choice worksheet would make a similar impression.

The energy conservation and transfer topic is a new addition to North Carolina’s fifth grade education standards. In fact, Muddy Sneakers has incorporated four subjects into its program that are new to the 2012-2013 curriculum. Staying on top of changes to state education standards and bringing in trained outdoor education instructors provides a service to teachers and students, Olson says. Classroom teachers often aren’t exposed to experience-based education methods or encouraged to take students outside, and because science can be an intimidating subject, teaching it in an unusual setting can make some traditional teachers uncomfortable.

If administrators are concerned that spending time away from the desk will lead to slipping scores on standardized tests, Olson has an answer for that, too. He offers a report that shows year-end scores in science, math and reading are significantly higher among classes participating in Muddy Sneakers. Gains in science are particularly high — about 25 percent more students in participating classes meet or exceed state science standards.

Those numbers tell part of the story, but the mission of environmental education is also to increase kids’ familiarity with the natural world and encourage their explorative instincts. Olson says today’s students are often afraid of being hurt or lost in the forest, so the programs begin with a day designed to put them at ease. Once students feel prepared for challenges such as approaching thunderstorms, bee stings and going to the bathroom outside, the following lessons proceed more smoothly.

Perhaps ten years ago fifth graders didn’t need to be taught how to use the outdoor bathroom. But, as a growing body of research affirms, many of today’s kids are increasingly removed from their own backyards. Despite that distance, these schoolchildren will need to understand their relationship to the natural world in order to make tough decisions about the future.

A coal train screeches beside the curving North Toe River as the Waterbug Safari students splash about, searching for insects and squealing when one net incidentally catches a fish. One day they will be responsible for the river’s health; today they are saying hello.