Rolling snake eyes: Americans are more likely to die from a dog attack, a lightning strike or a car accident than a venomous snake bite. The timber rattlesnake, in particular, won’t strike unless provoked. Photo by Tim Vickers

Imagine yourself in the mountains, climbing near large rocks. Suddenly, from an outcropping near your feet, you hear something. It rattles like a maraca, you think, but not as festively.
Congratulations: you found a timber rattlesnake! Historically, it has not been hard to happen upon Crotalus horridus. This snake can be found in the eastern United States, coiling themselves throughout the dense coastal wetlands, low pine flatwoods and rocky mountainsides of Appalachia.

Despite their importance in the larger ecosystems and their beneficial ability to control rodent populations, timber rattlesnake numbers are currently slithering downwards. Scientists and field observers, despite scarce data to show trends, have a general consensus that populations will decline at a rate of more than 10 percent over the next 20 to 30 years. Populations in Maine and Rhode Island are already presumed to be gone, and several Appalachian states, in hopes of preventing a similar catastrophe, recognize this snake as a threatened or endangered species.

Because the timber rattlesnake gives birth once every three years, they do not typically respond well to human impacts. Snake poaching and hunting continue to haunt the species, as individuals often illegally collect them for the skin, meat, or even just the sport (If you want to be disillusioned, search “rattlesnake round-up” online). Habitat fragmentation and population isolation due to human infringements have also biten the rattler hard.

One of the bigger factors in their decline in Appalachia is the destruction of hibernacula, the shelters where these serpents while away their winters. These dens can be found below the frostline in rock outcroppings, hard stump holes, or solid piles of brush. They are the centerpieces of a rattler’s territory, and when they are interfered with by development or human round-ups, the population of that den will survive as long as it takes you to say, “Maracas.”

The fact is that most people don’t much like snakes; however, for all the hubbub over snake bites, they are not at all prevalent. The odds of getting bitten by a venomous snake are very improbable: less than one in 37,500 people nationwide will be envenomated, and only one in 50 million will die from that bite (about five or six fatalities every year). By comparison, Americans are more likely to die from a dog attack, a lightning strike or a car accident than a snake bite.
The timber rattlesnake, by most accounts, is a reticent creature whose rattling serves only to warn people away. From what Blue Ridge Parkway biologist Bob Cherry has heard, many snake bites involve “the hands of young males who have been drinking.” In other words, the people who get bit the most might be 1) the least cautious and 2) the most provocative.

Fortunately, it’s easy to snake your way out of an encounter. Know that the grand majority of snakebites occur during the summer months. Stay on clearly marked trails and out of tall grass. Be careful when putting your feet or hands out of sight, and be sure to wear boots and thick socks while hiking. If you run across a snake, just stay away: they can only effectively strike within a distance of one-half the length of their bodies.

But how are you to know if your scaled surprise is a timber rattlesnake? Of course, the rattle is an obvious marker, but there are other ways to identify it. This venomous pit viper, like all pit vipers, is given away by its triangular-shaped head, the visible heat-sensitive pits on the sides of its face, and its vertically elliptical pupils that dilate to near-circles in dim light. The northern copperhead, which can be easily identified by the rust-colored patch atop its head, is the only other venomous snake in Appalachia. 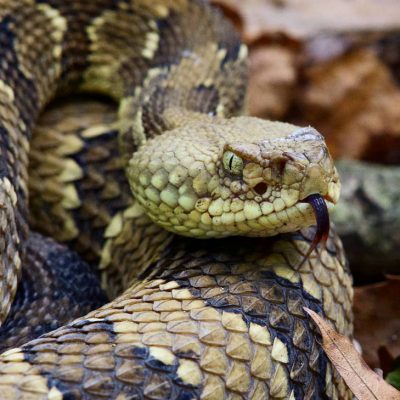 The timber rattlesnake has a heavy body and a three-foot length on average, but some can grow to five or six feet. Its coloration, at least in the mountains, will occur primarily in two varieties: a yellow phase and a black phase. The yellow phase tends to be more common: its body will be a yellow or tan base-color with brown or black crossbands. The black phase rattlers are almost completely black, with a dark base and darker crossbands (contrary to some myths, the sex of the timber rattlesnake cannot be determined by its color).

If you should run across one of these rattlers on your own property, Bob Cherry says, grab a rake or broom — something softer than a pole, which can easily harm the snake — and safely scoop the snake into a hard-sided plastic container such as a trash bin.

Because the timber rattlesnake and other snakes are very territorial, once they are moved beyond their home territory, they suffer from high mortality rates. For this reason, move the snake no more than a couple hundred yards away. The snake, negatively associating your yard with a forced emigration, shouldn’t come back.

And even if the timber rattlesnake does return, you can recognize its lively maraca as a simple reminder — you stay on your side, and I’ll stay on mine.

Timber rattlesnake venom varies geographically and from snake to snake, and can be divided into four basic types

West Virginia named the timber rattlesnake its state reptile in 2008

In North Carolina, every year 19 snake bites occur per 100,000 people — about five times the national average, making it the highest in the nation

Rattlers like these generally migrate 1.3 to 2.5 miles from their den every summer

Every time the snake sheds its skin, a new segment on the rattle is added