The Ballad of Tom Dooley 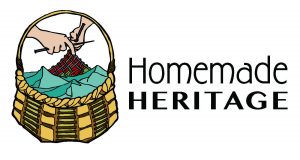 “Murdered in May of 1865,” a white gravestone on the banks of the Yadkin River in Wilkes County, N.C., reads. “Tom Dula hanged for crime.”

The grave belongs to Laura Foster, the victim in one of the most popularized and retold murder cases in Appalachian folk history. Like a game of cultural telephone, the story of Tom Dula (sometimes spelled “Dooley”) has been passed through time in songs, ballads, film and poems. Now, it has been put into novel form by Appalachia-focused author Sharyn McCrumb. 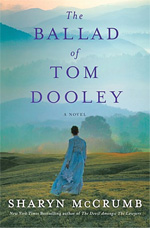 The Ballad of Tom Dooley by Sharyn McCrumb is the latest retelling of the long-lived folk story of Tom Dula.

In The Ballad of Tom Dooley, McCrumb does the legend justice by searching for the truth, and where the case goes cold, she does a little guesswork of her own (it is a work of fiction after all). Her account is much closer to the truth, she argues, than The Kingston Trio’s, the group that truly made the folktale famous with their 1958 song “Tom Dooley.”

After returning from the Civil War, Dula worked as a laborer in the Yadkin River Valley. Soon after, he fell for Laura Foster, cousin of his long time love interest, Ann Foster Melton. Folklore suggests that Laura became pregnant with Dula’s child and the lovers decided to elope. The morning they were to leave, May 26, was the last time Laura would be seen alive.

Everyone knows, if you tell a story enough the facts begin to grow a bit hazy. The shopkeeper, banker and borrower all have their own versions. But since the murder, the guilty verdict and the hanging of Tom Dula outside of a train depot in Statesville, N.C., the details haven’t truly mattered in a story that has made an indelible mark on the area’s past and present.

Originally recorded in 1929 by Gilliam Banmon Grayson and Henry Whitter, the murder ballad “Tom Dooley,” also known as “Hang Down Your Head Tom Dooley,” became a hit when the Kingston Trio harmonized the dark history. The Trio’s version has been selected as a “Song of the Century” by the Recording Industry Association of America and the National Endowment for the Arts and was inducted into the National Recording Registry of the Library of Congress.

The Laura Foster grave lies on a private farm in a culturally significant area of Wilkes County called Happy Valley. Even today, passers-by will leave flowers for Laura. The story of her death draws visitors to the site and, due partially to its cultural significance, the Jones Farm is being placed under conservation easement by Foothills Conservancy of North Carolina land trust to prevent the farm from being developed or subdivided. 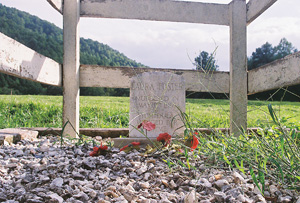 Each year in his open pastures, landowner Tony Jones hosts the Happy Valley Fiddler’s Convention and invites hundreds of folk musicians to the very valleys and hills that Tom and Laura walked. The fiddler’s convention began because the story is so well known in folk music circles, Jones says. He is using that impetus to develop economic benefit through agritourism, rather than selling his land for development of riverfront homes.

Investigating for The Ballad of Tom Dooley, McCrumb walked the same hills. She spoke with those who had grown up hearing the story, each with their own opinions and no two stories the same. In becoming an item of pop culture — hit cartoon The Simpsons once included a verse of “Tom Dooley” in an episode — even what little is known of the truth has been twisted.

What could have been a closed case, a dusty trial record in the North Carolina Archives and a solitary forgotten grave, over time has become the Appalachian equivalent of a Shakespearean tragedy. One historical fact that McCrumb couldn’t get wrong: Though it had no legal force, Tom Dula was acquitted in 2001 after a petition circulated around Wilkes County.

Fact or fiction, it’s how a story is told that makes it last.