It’s 5 a.m. and outside the truck, headlights reveal driving snow squalls and drifts as high as the pickup’s hood. Our crawl up Roaring Creek Road near the Toe River of North Carolina comes to a sudden halt in a wall of whiteness. We abandon our attempt to dig out the beast and don skis. 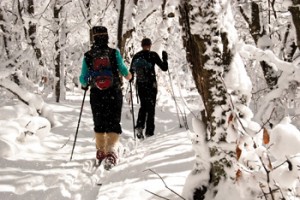 Chris Curtin and John Fennell shush along the Appalachian Trail en route to the Hump Mountain. Photos By Kristian Jackson

Minutes later we are skiing up the Overmountain Victory Trail in search of an adventure higher up in Roan Highlands, a 20-mile group of mountain peaks straddling the border between North Carolina and Tennessee. Winter is palpable and immediate here. The wind scours its way through bare tree limbs and whips up the powdery snow, creating an atmosphere that is felt as much as seen.

We seal our zippers and pockets to keep winter out and stay moving to stave off the bone-chilling cold. Further into the Highlands we pass through a sheltered cove near 5,000 feet in elevation where the trees hang heavy with snow. We reach the open expanse beyond the trees. In calm weather, the nearby open balds of The Hump and Little Hump Mountains would provide outstanding views, but now everything is white, threatening and loud. We turn our backs to the wind, eager to make some teleturns in the deep powder.

Telemark skiing (also known as nordic or cross-country) has been practiced in the South for decades. The style refers to both a technique and a type of ski and boots. Fixed in the front and free at the heel, the free heel allows the skier to kick and glide uphill (sometimes with the use of skins that help grip the snow) then drop a knee and perform elegant “telemark turns” to descend.

Devotees of telemark skiing have waxed and waned over the years. The style almost died out in the 1970s but experienced a resurgence in the 1980s. During that decade, the peaks of the North Carolina High Country region were so popular that cross country ski rentals were available in several places and a company called High South Nordic Guides offered tours to Roan Mountain and telemark lessons at a nearby ski resort. 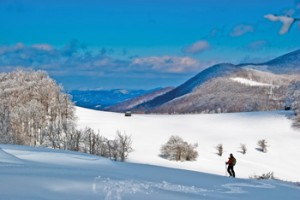 Here there are no lifts, no lines, no crowds, and only a fraction of the environmental impact of the ski resorts. Nordic skiers in the High Country are rewarded with solitude, unspoiled beauty, and the exhilaration of human powered fun.

Drought and warmer winters in the 1990s and early 2000s brought another slump to the sport, until the high snowfall totals of the past few winters sparked a new telemark revolution. Downhill devotees, snowboarders and cross country traditionalists quickly rediscovered the beauty and excitement of ski touring. Now, formerly obscure pockets of powder are often covered with ski tracks as soon as a winter storm is over, and the word has spread about “secret stashes,” where skiers and boarders.

But ask any skier about the most critical component to back country touring in the South and the answer will invariably be “snow.”

Prior to the past three winters, the common refrain of regional nordic skiers was, “It was snowier back in the day.” In fact, the first telemark boom in the 1980s ended when “the winters changed,” according to High South Nordic Guide co-founder Jeep Barrett.

A look at weather charts from Ray’sWeather.com, a popular amateur weather website that covers the western part of North Carolina, reveals a dramatic decline in snowfall amounts since the mid-80s. Although the past three winters have brought impressive snow, the numbers show that trends over the past two decades simply do not measure up to the dumps of 30 years ago.

Snow in the South, even at the highest elevations, will likely remain hit or miss. Perhaps this is what draws the attention and enthusiasm of the Southern skier: When the snow is good, it’s really good, and then it’s gone. However, even in low snow fall years, nordic skiers will still find enjoyable tours in the Southern highlands.

The High Country Nordic Association was formed in 2010, when a group of nordic skiers met to plan a “Tele-Fest.” The association is planning many activities this season, including a Film Festival, the 2nd Annual Telefest Jan. 21 at Beech Mountain, N.C., and updates on regional skiing conditions. Visit their group and page on Facebook to find ski partners and ask for tips. To find the best backcountry spots in your area, check with local ski shops or area outdoor outfitters. If you can find it, get your hands on a copy of Randy Johnson’s book Southern Snow to discover the vastness of our winter world.

No southern skier should go without a tour of the Roan Highlands. Regarded as Nordic Nirvana, when the snow is right the Roan Highlands are the crown jewel for ski touring in the Southeast. The Highlands rise like a weathervane above the hills of Tennessee and catch the full force of arctic weather systems moving in from the northwest. Gale force winds howl through the evergreens, breaking branches and driving snow into massive drifts. On the balds, wind scours the open country nearly clean of snow and deposits enormous snow fields on the lee side. 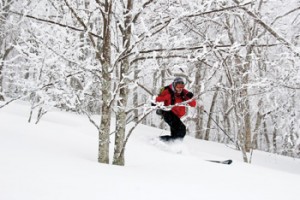 The High Country Nordic Association's Justin Studt finds the flow of the telemark turn in the trees.

Tours in the Highlands are as varied as the weather, passing through a unique combination of evergreen forests, hardwood glades and open balds. Some can be moderate winter excursions, others can cause the most die-hard snow freaks to question their love of extreme conditions. Several classic tours begin from Carver’s Gap on the Tennessee/North Carolina line:

— For a short out-and-back tour, ski along the road to Rhododendron Gardens, tour the gardens, then return. To lengthen this tour, head out the old Balsam Road, the first road on the left when heading up from Carver’s Gap. This is a pleasant, quick tour with little elevation change.

— For a more ambitious route that requires a few tele-turns, head up the road to the old Cloudland Hotel site and continue on the Cloudland Trail. After passing the first gate, check the Appalachian Trail on your right for snow depth. If the creeks are frozen and the snow is at least 12 inches, this should work as a return route. This trail undulates along the top of the massif and climbs to its terminus at Roan High Bluff. Often the winds at the bluff can be heard well before reaching the top. After a snack at the bluff (stay in the woods and out of the wind) head back down the Cloudland Trail. This requires deep snow and a solid tele-turn.

— For a fast and exciting downhill from the Cloudland Hotel site, head into the spruce trees and down the Appalachian Trail. This run requires quick reflexes to handle the switchbacks and other surprises.

— For more experienced adventures in the Highlands, try the Roaring Creek Area. Flanked by the Yellow Mountains and the crest of the Highlands, this impressive watershed on the North Carolina side rises from the low elevations of the Toe River to the massif crest. For tours beginning on Roaring Creek Road, you will need to be prepared for skiing up and down steeper terrain, turning in trees, route finding, and self-rescue. (Note: the road to Roaring Creek is not plowed, so you may also need to ski to the trailhead). From the Overmountain Victory Trailhead, skiers can access the Appalachian Trail, Little Hump and the Hump. Look for open downhill runs on the lee sides of the fields and be prepared for brutal conditions.