With their deep brown bodies and gold-tinged feathery manes, golden eagles are icons of ferocity. 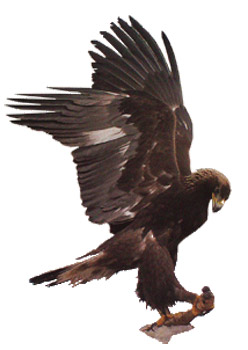 An Eastern golden eagle is caught on film by a research camera. Clearings were baited with roadkill deer to attract the aerial predators. Photo by Barb Sargent/Todd Katzner

When Americans imagine a golden eagle diving through the air with talons outstretched, they typically pair the image with a Western backdrop. But as Appalachian researchers are quick to point out, the notion of golden eagles as strictly creatures of the West simply isn’t true.

“It turns out that there’s a small but substantial population of golden eagles in eastern North America,” says Todd Katzner, research assistant professor at West Virginia University. Katzner is a member of the Eastern Golden Eagle Working Group, an international partnership founded in 2010 to study the mighty raptor’s distribution and ecology.

Katzner’s preliminary research suggests that West Virginia and Virginia are the eagles’ main winter stomping grounds, though golden eagles have been spotted wintering as far north as upstate New York and as far south as Florida. Eastern golden eagles breed in northeastern Canada. When they migrate south, they primarily winter in the central and southern Appalachian Mountains.

“We don’t know if there is a really strict habitat requirement, but we do know that the areas of West Virginia and Virginia where the birds are found are primarily the Monongohela National Forest and the George Washington and Jefferson National Forests,” Katzner says. “Those are some of the more densely forested areas that we have in this region.”

In other parts of the world, golden eagles are found primarily over open country. This habitat difference has fueled speculation that Eastern golden eagles could be genetically distinct from their Western counterparts.

Maria Wheeler, a doctoral student at Duquesene University in Pittsburgh, Pa. co-supervised by Katzner, is researching the level of genetic distinction present in Eastern golden eagles. Not only is Wheeler studying how separate the Eastern birds are from Western North American populations and those around the world, she’s delving into the golden eagles’ genetic past. In a well-intentioned attempt to bolster the golden eagle population of the Southern Appalachians, Western golden eagles were introduced between 15 and 35 years ago, and these introductions may have changed the biology of Eastern goldens already living in the area.

To determine whether the genetic code of Eastern golden eagles’ has actually changed, Wheeler is collecting tissue samples from museum specimens of Eastern goldens collected before the introduction of the Western birds. She then compares the Eastern eagles’ historic genotypes with modern genotypes.

Wheeler’s genetic study is just one topic being probed by the Eastern Golden Eagle Working Group and their collaborators. To understand the birds’ behavior in their Appalachian winter homes, researchers have placed over 80 motion-sensitive cameras at select sites between New York and North Carolina. These cameras are rigged in small, remote clearings that are baited with roadkill deer.

Over the past five years, thousands of images have been recorded at these sites. The high numbers affirm the raptor’s winter appetite for carrion.

Less certain is whether Eastern golden eagles dine on other birds during the summer, as some suggest. Katzner’s team has placed telemetry tracking devices on about 50 birds, which record location every fifteen minutes throughout the year. Research partners in Quebec have provided some summertime assistance, but often these goldens soar into the roadless territory of Canada’s far north.

Golden eagle researchers, including Katzner, hope that learning the raptor’s migratory flight patterns will help avoid conflicts between future wind energy development projects in Appalachia and the mighty birds. In the most famous conflict between the energy and avian worlds, at California’s Altamount Pass Wind Farm the failure to study bird movement patterns — as well as flawed turbine design — tragically led to high raptor death tolls from turbines.

By analyzing the risk golden eagles face from wind development, researchers could protect a range of other slopesoaring birds of prey, such as redtail hawks, broadwing hawks, bald eagles and osprey.

“In the East we know of no turbines that have killed golden eagles,” he says. “What we don’t understand is why some turbines are dangerous and some are not. The goal of our research is to figure that out.”

Golden eagles are monogamous, and their partnerships can last from several years to life. Females lay one to four eggs per year, which both parents incubate. Typically, one or two survive to fledgling age. The ladies are typically larger, but both sexes sport the species’ trademark plumage — a pattern of brown, gold, grey and sometimes even white feathers.

Golden eagles are used by Mongolian and Kazakh falconers to hunt wolves in Central Asia’s wild steppes. With a wingspan that averages from six to nearly eight feet, it’s no wonder that the only natural predators golden eagles face are brown bears and wolverines. There’s even one confirmed report of a golden eagle preying on a brown bear cub.

There are six known subspecies of golden eagle, which range from Japan to Siberia and North Africa to the Himalayas.