Turtle Island: Living off the land With Intention and Integrity 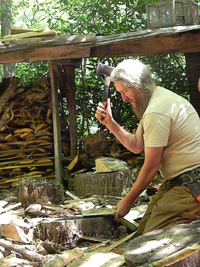 Eustace Conway demonstrates the proper and safe way to wield an axe for a group of adult campers at Turtle Island Preserve. Photo by Jillian Randel

Eustace Conway has cooked exclusively over a fire for the past 35 years—one of many skills that attract people to his home at Turtle Island Preserve to learn about living off the land.

Conway lives on a 1,000-acre preserve near Boone, N.C. The preserve first opened in 1987 and serves as a natural model for living off the land.

On the day I visited, I took a tour of the kitchen, garden, pine forest and various barns housing horses, chickens, ducks, guinea fowl and goats. The preserve is simple, yet represents an old and endangered intelligence about nature.

“Eustace has been an archivist his whole life,” said Desere Anderson, Turtle Island’s office manager. “He’s been gathering information and learning from different cultures and traditional elders and pooling that knowledge and experience together.”

“We don’t have any doors here,” said Conway. “We want people to explore and ask questions. We want this to be an open space.”

As we sat in the kitchen discussing the preserve, I could hear the trickle of the creek flowing nearby. It was a calm and relaxing scene. Anderson explains that the kitchen, washhouse and garden were each constructed near the creek to allow easy access to water for cooking, washing and watering. 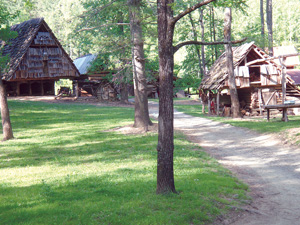 Structures at Turtle Island built with wood harvested directly from the preserve.

“We use primitive skills as a vehicle for character development,” said Anderson. “We give the physical skills, like learning how to start a fire in a rainstorm, and that transfers into skills like confidence which are gained through actually doing the work.”

All of Turtle Island’s buildings were constructed of wood sourced directly from the preserve. Over 100 visitors participated in the building of a straw-bale shed; a summer youth group built a tree house in the shape of a boat; several other groups helped with the construction of a two-story classroom and the preserve’s bathhouse.

During my visit, Conway was teaching an adult camp how to safely use an axe. As Conway led participants to a woodpile for a demonstration, he picked up a wooden bowl that he carved by hand. He explained how integrity could be woven into even the simplest objects.

“By putting time into things, you get meaning out of them,” Conway said. “When your belongings have meaning, then you get more meaning in your life.”

“I talk about horses, the potential of horse power and horse history,” explained Conway. “That often becomes a venue for people to talk to me about starting a farm while taking a tour of our natural outdoor campus.”

Later, as Conway sat down at the kitchen table sharpening a knife, we discussed the growing movement of land-based living initiatives.

“It’s funny; twenty, thirty years ago when I was doing this, nobody cared,” reflected Eustace. “Starting about five years ago, there have been all these buzz words like ‘green living’ and ‘sustainable farming.’ They have people all hyped up.”

Hype can be a powerful tool. Only time will show the results of that hype.
Until then, Conway’s narrow dirt road through the mountains is a passage to a home built with intention and integrity that appears to be more and more the home of the future.