Spinnin’ the meter with flowing water

Just as kayakers and farmers love rain during a drought, so does Richard Cobb.

Cobb installed a 5-kilowatt microhydro system on his Mitchell County property in Buladean, N.C. in the late 1990s. Though he is environmentally conscious—green construction is his day job—Cobb’s primary motivation was creating a source of power in case the Y2K prophecies proved true.

The microhydro system’s energy production varies and correlates to the amount of water in Pine Root Creek. The creek is about six feet wide; the watershed consists of two to three acres and includes several waterfalls. Cobb’s system involves 800 feet of pipe, called the penstock. The penstock starts upstream at the intake and continues to the turbine, which turns the rushing water into electricity. The water then flows back into the stream. During that span, the water drops 170 feet in elevation. 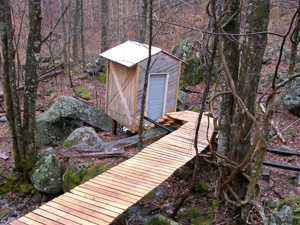 A deck leads to a shed housing a turbine and generator of Richard Cobb's microhydro system. Photo by Richard Cobb.

Winter and spring are the most productive seasons for Cobb’s microhydro system. When the water level is at its highest—around 1000 gallons per minute (gpm)—Cobb says he could triple the energy production if he had three systems. A flow of 100 gpm is enough for his energy usage, though much more is needed for heat in the winter.

“When I am running full blast in the winter, I can pretty much not only run electricity but heat my house too,” Cobb said. “In a really good year, if the creek stays up, I basically run a zero-energy house.”

Cobb said his system needs a bit more than an inch of rain a week to stay running. In the summer, thunderstorms help increase the flow of the creek, but the creek subsides soon—especially after a spell of dry weather.

“The best thing, of course, is an all-day, steady rain,” he said.

Cobb’s microhydro system cost $20,000, and he purchased the materials from Sundance Power Systems in Weaverville, N.C. His system is different from others because it includes a battery bank and is connected to the electricity grid. Cobb said the battery bank doubled the cost of his system.

Except for some technical advice from Sundance Power Systems, Cobb installed the system himself. Maintenance work includes switching nozzles as water levels change, replacing parts in the turbine and cleaning the intake screen that filters out silt.

“You just have to be a tinkerer to have a hydro system,” he said.

According to Cobb, the system paid for itself within five years.

“It’s a pretty big investment, but a quick recovery,” Cobb said. He recovered 60 percent of his total cost with federal and state tax credits and the rest he saved by making his own electricity.

According to the U.S. Energy Information Agency, the average American household uses 920kWhrs per month. Cobb’s passive solar home, which also has solar hot water and insulated concrete forms, uses about 600kWhrs per month, one-third lower than the national average.

Microhydro is less versatile than other renewable energy options because it requires a steady source of running water, but there are benefits to this.

“The thing about hydro is it runs nonstop 24 hours a day,” Cobb said. “You’d have to install a PV (solar panel) system about four times as big to produce the same amount of power.”

But for homes that fulfill the requirements, a microhydro system is a valuable long-term investment in sustainable energy and a sustainable future.