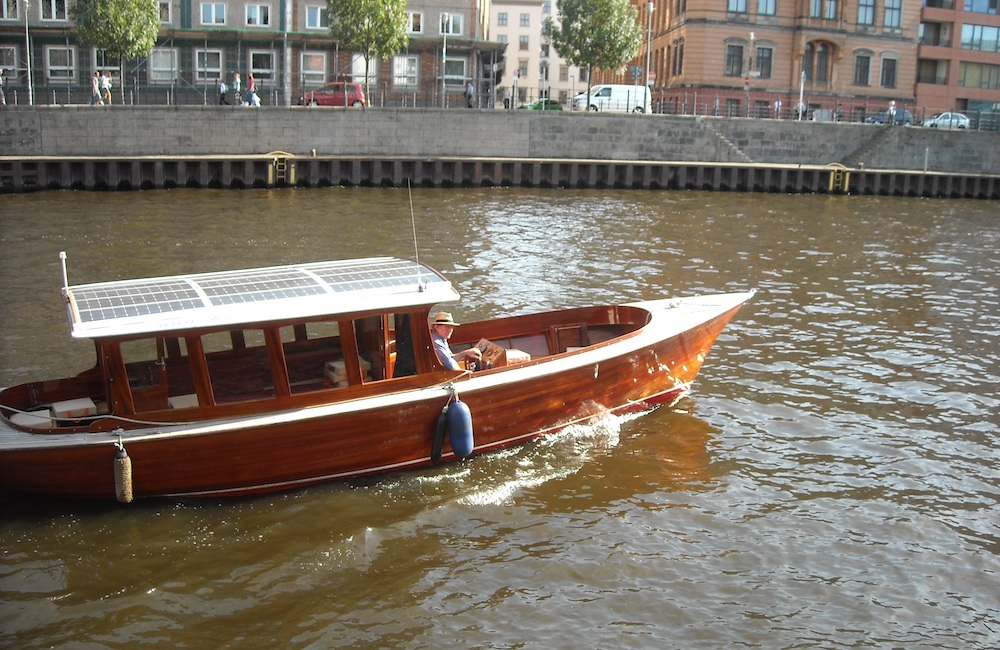 Capt. Arno Paulus pilots a solar photovoltaic boat down the Spree River in Berlin. The boat cruises at about 2-3 knots on one KW of rooftop PV power. Dozens of these boats, and thousands of less photogenic photovoltaic installations, dot Berlin and the German countryside, due in part to strong government subsidies. Photo by Bill Kovarik

So this is the speed of light.

We laugh as the solar-powered boat glides silently down the Spree River through the heart of Berlin, Germany. As monumental buildings drift past, our captain, Arno Paulus, points out a series of 64-year-old bullet holes in the stone walls alongside the river.

It’s a sobering moment in the new Berlin, a city where ghosts still flit through the Tiergarten and where hollowed-out churches still draw crowds on the Ku-Damm boulevard.

And it’s because of this past, Paulus says, that Germany has a moral obligation to help change the world. “We can do it,” he says, “but we can’t do it alone.”

And so our journey starts with a photovoltaic boat tour as a kind of tribute to the new Germany, grimly aware of its history but determined to set the example for a remarkable future.

Its all part of the “road to Copenhagen” climate change tour that also includes formal meetings with German officials and informal talks with German scientists.

I’m among seven American journalists who have been invited to Germany and Denmark by both governments, to see first hand the commitments and the costs, as the world considers what might be done at the international climate summit planned for Copenhagen in December of 2009.

Appalachian Voice is very welcome, one German official says diplomatically, because Appalachian coal is so well known in Europe.  But Europe is in the process of closing down its coal fired electrical plants, and he hopes that we will convey this message: that change need not be disruptive; that new jobs and economic stability can come from renewable energy; and most of all, that the world needs American leadership.

That leadership could take a page from the European example.

With more than 15 percent of Germany’s electric supply coming from wind, hydro, biomass and solar, the renewable energy and conservation sector has grown to over 280,000 jobs – nearly 10 times more than those employed in coal mines. The program is projected to grow to half a million jobs by 2020.

The reason for all this is to comply with international carbon reduction treaties, such as Kyoto and the anticipated Copenhagen treaty. Germany has reduced CO2 by nearly 20 percent so far, and is willing to reduce 40 percent as compared to 1990 levels, and possibly more, if the Americans will join the effort.

Not all of this is to be taken at quite face value–as much as half of the reduction in CO2 came rather easily, from shutting down inefficient steel mills in East Germany after the wall came down.

But in a way, that’s part of the point. By shutting down the inefficient mills and turning to renewables, they are creating cleaner new industries with more long term employment.
Rather than costing money, the government projects in the climate protection plan will increase GDP by over 50 million Euros.

One reason that renewable energy has grown so quickly in Germany is that the subsidies work through a “feed in tariff” mechanism. At present, wind energy receives about 13 cents for onshore and 19 cents per kw for offshore production. The rate is higher offshore because Germany wants the turbines further out than is usual, where there is little danger to bird life. Also, solar photovoltaic panels receive a 48 cent per kilowatt hour subsidy.

The rates are high, but they reflect new production, European prices for electricity, and the avoided costs of environmental impacts from other technologies. The fact that they don’t have to clean up ash spills, for instance, is worth a few cents at least. Also, the rates are continually reduced as costs for new energy production from renewable energy come down.

Photovoltaic panels for instance cost about half of what they did only five years ago. Wind turbines, too, have become more reliable and easier to set up and operate, and “smart grid” renewable energy systems are being built with the enthusiastic cooperation of the utilities.

The “feed in tariff” is a structure that is being adapted around the world. While something like it was used to start wind farms in California in the 1980s, Germany and other European nations have spent a decade developing the complex program.

The feed in tariff means that anyone can buy a set of photovoltaic panels, or a windmill, and get help and technical advice, and then collect a check every few months based on how well the panels perform. Individuals and companies of various sizes – and not just the government or the utilities – are making investments and innovations because there is a predictable rate of return based on performance.

The feed in tariff is set so that there is about a 10 to 12 year payback period for the equipment, after which, the checks keep coming and the owner of the panel continues to make money.