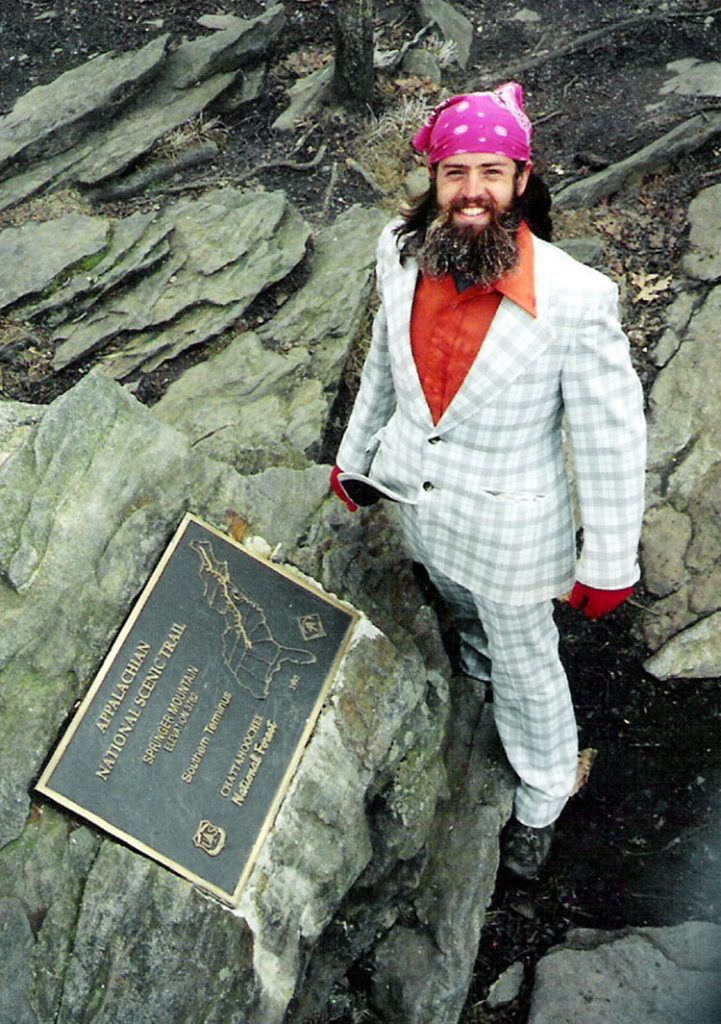 Author Stephen Otis stands on top of Mount Katahdin at the start of his 5-month southbound trek on the Appalachian Trail. Photo courtesy of Stephen Otis

If you were to somehow locate a New York Evening Post, circa 1922, you would read this same headline. Penned by Raymond H. Torrey at the behest of William Welch, director of the Palisades Interstate Park Commission, the article dared to imagine, as Benton MacKaye had one year prior, a grand path connecting forest and farm all the way from Maine to Georgia.

Today, you can see that vision in splendid array. In fact, if you want (and why wouldn’t you want?) you can hike the length of the great Appalachian Trail. You don’t really even need maps. More than 165,000 white blazes on the trees mark the way. In fact, right now, there are several hundred people doing that very thing.

And as fall approaches, we congratulate them. Almost at Katahdin, the end, you brave (some say crazy, I say willing) souls. And you (yes, crazy) Southbounders, you’re almost at Springer. If you’ve not ever seen Katahdin, you must. Like a crown she rises toward the heavens, surrounded by a subservient wilderness of swamp and pine. Her crest is breathtaking, a fitting reward after climbing up miles of stones the size of Jack’s giant’s bigger toes.

As we welcome the thru-hiker class of 2009 to the roster of the 10,000 others who have taken the five million step, 2,175 mile jaunt through fourteen states, six national parks, eight national forests; past the 2,000 rare plant and animal species; over trail that thirty clubs and multiple partnerships (some 40,000 people) maintain; we do so with a hearty, “Thank you.” As do those who have gone before you.

The Appalachian Trail Conservancy also thanks you. Founded in 1925, they were the force behind the 1968 legislation that declared the AT America’s first national scenic trail.
Myron Avery thanks you, whose vision carried the Trail northward into Maine. “Follow the Appalachian Trail across Maine,” Avery wrote. “Remote for detachment, narrow for chosen company, winding for leisure, lonely for contemplation, it beckons not merely north and south but upward to the body, mind and soul of man.”

Earl Schaeffer thanks you, the first thru-hiker on record. That was 1948. He did it again in 1998 (at nearly 80 years of age), proving that retirement needs no Winnebago or comfy chair.
And I thank you.

My own thru-hike began in 2002 as somewhat of a fluke. Colin Roberts, my hiking buddy, had dreamed of the long walk since he was five, when he met a thru-hiker on the outskirts of Damascus.

A giant to the young Colin, this hiker was weathered and worn, but steady like Odysseus on his way home. “You’re going where? And you came from where?” It was implausible to the boy that a man could walk through 14 states in one bound, something only a dream could conjure, but when he became a man, Roberts found that dream a reality, standing on the granite ribs of Katahdin.

And there I was with him, decided only a few days prior to get some gear (55 pounds of it!) and accompany his southbound trek to Springer Mountain, Georgia. Legs like used station wagons and a heart coated in buttered popcorn. No practice hikes, no cardio, not even a casual yoga session. Three days in, I hated everything in my entire world. Flies, mosquitoes, ticks, blisters, pools of humidity—demons.

“You’re a thru-hiker?” a man asked, finding me 80 miles into the wilderness, in a puddle, rubbing mud all over my body (because it felt cool). And that dumb smile planted on my head as I said, “SOBO’02, you bet!” He tossed me some hope in the form of beef jerky and said,
“See ya at Springer. Maybe.”

But there we were five months later, Colin and I, sitting next to a fire 12 miles from Springer, a cold fog rolling in, sipping on coffee, slowly taking in what this day would hold: the end. What end? The days, goals, miles, exhaustion. The torment of probing questions. The laughter in the hills. The sorrow in the trees. All a part of us now, a steady foundation against a former foe called chaos and clutter. And I didn’t hate a single thing this morning. I was, maybe for the first time in my life, steady. And Colin’s dream, well, he was awake, smiling contentedly in the fog.

– – – – – – – – – – –
Stephen Otis and Colin Roberts’ are the authors of “A Road More or Less Traveled,” recipient of three Book of the Year awards and the 2009 Eric Hoffer Da Vinci Eye Award. The book novels their 2002 thru-hike from Maine to Georgia. Visit readaroad.com or Amazon to purchase a copy.