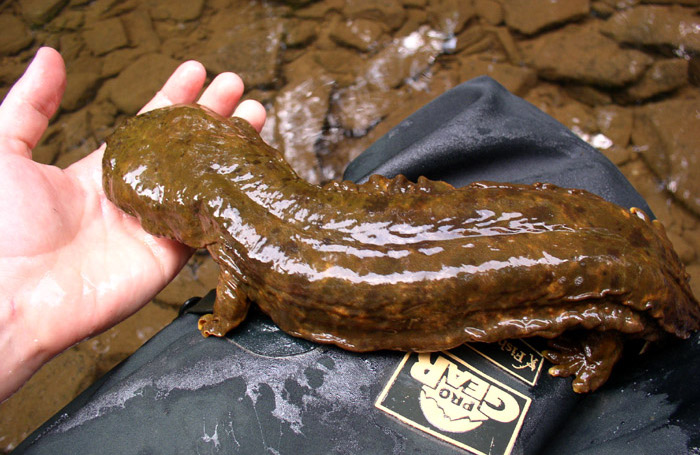 Sasquatch of the Salamanders
Cryptic, territorial, and elusive are traits inherent to the hellbender salamander, a unique and formidable-looking creature with almost prehistoric appeal. The Eastern hellbender is the largest aquatic salamander in the United States, affectionately known as the snot otter, devil dog, and Allegheny alligator. The giant amphibian averages from 12 to 15 inches, but has been known to grow over two feet in length and hides reclusively during the day beneath flat rocks in shallow, clean, and quick moving streams.

“If a fisherman catches a hellbender they’ll kill them,” said Jesse Pope, chief naturalist at Grandfather Mountain. “They think the hellbenders are eating the fish, but that’s just not true.” Rarely seen due to its nocturnal nature and secluded lifestyle, the hellbender has a voracious appetite, but not for fish. They hunt for crayfish, toads, and salamanders among other tasty morsels. The hellbender is exclusively found in the mountains and surrounding local areas in the eastern United States, with their largest concentration in western North Carolina.

These unique creatures are very important indicators of water quality, due to their sensitivity to certain factors such as pollution and siltation. The International Union for Conservation of Nature (IUCN) lists them as near threatened and they are close to qualifying for vulnerable status. In addition to the threat of misled fishermen, the hellbenders face habitat loss and degradation. “Hellbenders have to have good water quality and relatively low sediments in the water,” Pope said.

Studies are being conducted all over western North Carolina, searching for the presence of hellbenders in approximately 3,000 streams. “The concern is that a lot of the hellbenders we’re finding are big hellbenders, 15 to 20 years old,” Pope said. “We’re not finding the little ones. This raises concern. Are they remnant populations that are there? Are they no longer reproducing? Are these the last hellbenders that are going to be in those streams?”

The Itsy-Bitsy-Spider
The spruce fir moss spider is the world’s smallest tarantula. It exclusively inhabits elevations exceeding 5,000 feet and is only found at Grandfather Mountain, Mount Mitchell and Roan Mountain State Park. The tiny tarantula can take up to three years to reach full growth of 0.1 inches to 0.15 inches! “They are a little smaller than a tick but bigger than a flea,” said Pope. They are a variety of colors from yellow-brown to a reddish brown.

The spruce fir moss spider has been on the endangered species list since 1995. One of the main reasons that these spiders are endangered is that they require a unique habitat—damp moss mats growing on rock outcrops in well-shaded forests, typically populated with fir trees. “They are very species specific to a certain type of moss that grows up there,” Pope said. The little tarantula creates tube-shaped webs in moss mats that grow on rocks underneath spruce and Fraser fir trees of the southern Appalachian Mountains.

These conditions have become increasingly rare, as many Fraser fir trees have been wiped out by the balsam woolly adelgid, an invasive species from Europe. Without the cover of the Fraser fir trees, the spiders’ moss mats, which are essential to their habitat, are subject to climate changes and are frequently drying out.

Global warming is another threat to the Fraser fir, because they need at least a month of cold winter for their seeds to germinate. Finally, acid deposition from fog and rime ice is a serious threat to the spiders’ habitat. “We’ve found some of the rime ice pH measurements up here to be almost as acidic as battery acid. We’ve had it down to about 2.8,” Pope said. The limited range of this species puts it at serious risk when subjected to any disturbance of its habitat. 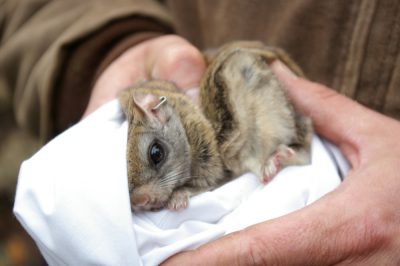 It’s a bird, it’s a plane, it’s a Carolina northern flying squirrel! This nocturnal rodent has notably large eyes and a long flattened tail that makes up 80 percent of its 10 to 12 inch body length. The term flying squirrel is a bit misleading; this airborne squirrel actually glides rather than flies using patagia, which is a large fold of skin that stretches from its front legs to the hind legs. The Carolina northern flying squirrel is only found in western North Carolina, eastern Tennessee, and southwestern Virginia. The U.S. Fish & Wildlife Service added it to the Endangered Species List in 1985.

They generally live in elevation areas that exceed 4,500 feet, and prefer the spruce fir forest transition zones that border northern hardwood forests. These conditions are ideal for nesting in tree cavities and feeding on fungi, lichens, catkins, insects, and tree sap—just a few items that make up the northern flying squirrel’s omnivorous diet.

Their habitats, however, are threatened by the balsam woolly adelgid, which targets adult fir trees. Destructive forestry practices such as logging also threaten their habitats. Another threat to the northern flying squirrel’s survival is the risk of infection by a parasitic nematode, called Strongyloides, which is carried by the southern flying squirrel.

In order to help ensure the survival of these delightful flying critters, conservation of high elevation coniferous and northern hardwood forests is essential.