Installing home solar will become more difficult for millions of people in the Southeast after Jan. 1, 2020.

The Tennessee Valley Authority, the federally run utility that provides electricity across Tennessee and parts of surrounding states, will stop accepting applications for its Green Power Providers program at the beginning of the year. The program allows participants with qualifying solar installations to sell all of the power they generate back to the TVA grid at a rate of 9 cents per kilowatt-hour. People already enrolled in the program will be able to continue through the end of their contract.

TVA stated that a top reason for ending Green Power Providers is that the program is underutilized. Environmental advocates like the Southern Environmental Law Center, a nonprofit legal firm, counter that this is because the program needs to be improved, not due to lack of demand.

“To the extent the GPP program is failing, it’s because of the program’s design, which has artificially stifled investment in small-scale solar in the Valley,” Christina Reichert, an associate attorney with SELC, said in a press statement. 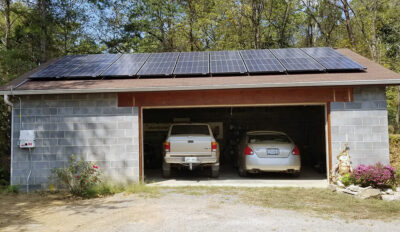 Linda Orth’s garage solar array was made possible in part due to TVA’s Green Power Providers program, which the utility is discontinuing. Photo by Linda Orth

In public comments submitted in response to TVA’s proposal, SELC writes that “TVA’s own research found that consumers continue to be attracted to programs that compensate consumers for their generation of electricity.” The law center states that, according to the utility’s research, ratepayers would prefer a standard net metering arrangement where they use the electricity their panels generate and are compensated for excess power they send back to the grid. Green Power Providers has also regularly lowered its financial incentives for participants since 2014.


TVA cited an “an unfair burden on non-participants” as an additional reason for shuttering the program. But the law center noted TVA’s own data shows that small-scale solar installations like those on homes or schools help the utility avoid costs from purchasing energy elsewhere, in addition to the environmental and health benefits of cleaner power.

TVA’s critics also argued that the publicly owned utility was skirting the public comment process and violating federal law because its board of directors decided to terminate the program and TVA began implementing the change without considering public comment or conducting an objective analysis.

The pro-renewable energy organization Southern Alliance for Clean Energy called on TVA to extend the program throughout 2020 and conduct a comprehensive study on the value of solar to inform “a genuine, transparent process to develop a suitable alternative to the GPP program that fairly compensates customers for providing benefits to all TVA customers.”

TVA has released an environmental assessment that proposes “alternative solutions” to the cancelled GPP program. The assessment states there may or may not be a replacement for the program, and the proposed replacements would pay energy producers a far lower rate per kilowatt-hour.

Under TVA’s latest 20-year plan, released in 2019, the utility forecasts slow growth in solar and nearly no gains in energy efficiency. TVA claims it will install “up to” 14 gigawatts of solar by 2040, but that figure is an extreme outlier and is not within the range of likely scenarios detailed in its plan.

In a blog post, Stephen Smith and Maggie Shober of Southern Alliance for Clean Energy wrote, “We think it is extremely unethical of TVA to continue to mislead the public into thinking TVA is actually planning to add significant solar in the near term. TVA either needs to put an end to the misinformation, or put forth an actual plan to aggressively add solar.”