Magnificent, strong and once thriving in Appalachian forests, oaks now struggle to regenerate. As deadly diseases spread in other regions, a new alliance is emerging to protect this key species. 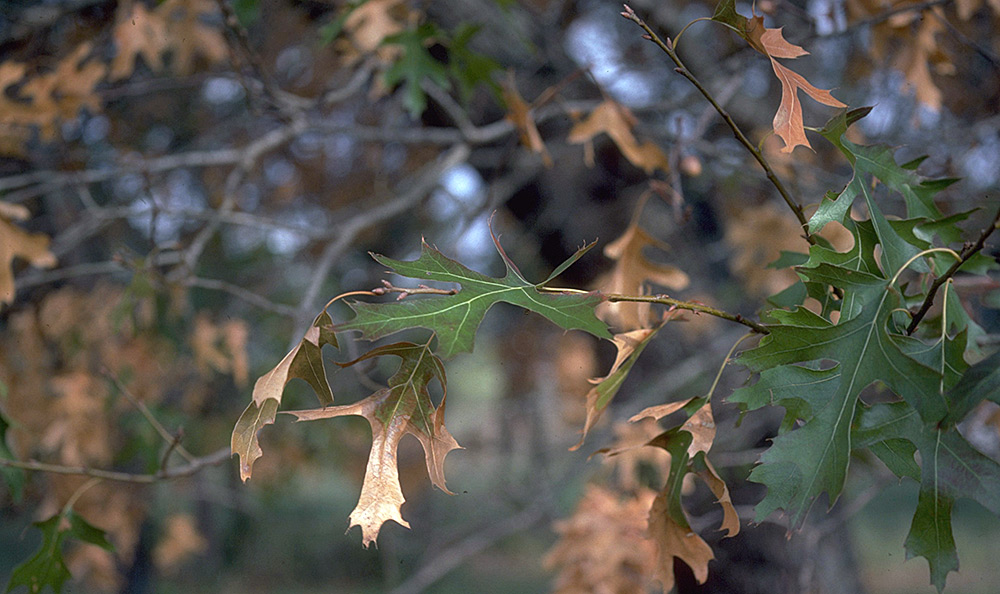 An oak in Texas is stricken with Oak wilt. Photo by Paul A. Mistretta, USDA Forest Service, Bugwood.org

Tree of life: the iconic Celtic image likely depicts an oak tree, a food producer for animals and humans alike in protein-rich acorns. The tree of diversity: 450 to 600 species occur worldwide, depending on classification, as oaks easily hybridize. North America is an oak biodiversity hotspot with at least 220 species, the majority of which grow in Mexico. In Appalachia, about a dozen different oak species are found in various habitats.

These prominent trees have helped to shape culture, diet and ecosystems across the world, yet are facing significant threats to their ability to thrive. Today, oaks are struggling to regenerate, and diseases spreading in the West and Midwest could bring ecological devastation if they take root in Appalachia. 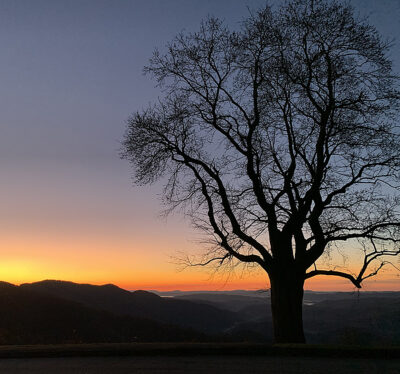 Humans have a long relationship with these mighty trees. The Cherokee language has separate words for white oak, pronounced “tsu-s-ga,” and red oak, “a-da-ya.” “Oak” is derived from similar-sounding words shared among many ancient Indo-European languages, and proto-Germanic “eiks” gave birth to the word used today.

White oak is a traditional basket-making material for the Eastern Band of Cherokee Indians, the wood being pliable enough to splint into weavable strips. A vital food source, indigenous people of North America ground acorns into flour, and the Cherokee extracted oil from them, “as sweet as that from the olive,” F.H. Harris wrote in 1937. Acorns have replaced the blight-stricken and nearly extinct American Chestnut as primary forage for mammals and large birds in Appalachian forests.

Oaks also support hundreds of species of insects, who reside at the base of the food pyramid. Giving food, shelter and habitat to countless species, oaks play a key role in the ecosystem. Now, researchers and foresters are working to protect these critical trees and help them thrive in today’s changing forests.

In 1935, the U.S. Forest Service enacted a policy of extinguishing wildfires in publicly owned lands within 24 hours. Around the same time, eastern forests were recovering from a legacy of clearcut logging practices. Oaks have adapted with fire and mild disturbance. Only shade-tolerant in their early years, fire-resistant oaks depend on burns to clear understory plants and to dry the soil as they grow. Moisture-loving tulip poplars and maples regenerate quickly after clearcutting, growing up into a canopy before slow-growing oak saplings have a chance.

Andy Tait, forestry director of Ecoforesters, a forest management nonprofit based in Asheville, N.C., has worked in about 100 different forests in Southern Appalachia.

“It’s a safe bet that there are oaks in the overstory 60 to 100 years old, but in the understory there is a dearth of oak regeneration,” says Tait.

As Appalachian forests mature without oaks entering the canopy, the composition of many oak forests is changing, says Tait, with more moisture-loving plants proliferating.

A German forestry practice called “femelschlag” might help. Femelschlag, which translates to “group cuttings,” mimics the natural process of a large tree falling down in a forest by making several harvests over three decades in an expanding radius, thus making edges of open light in the canopy.

“Oaks are goldilocks that like a little bit of sun, not a lot,” says Tait.

At the Bent Creek Experimental Forest near Asheville, N.C., U.S. Forest Service researchers are one year into a femelschlag experiment. Research forester Tara Keyser is excited about this practice adding to the tools used in managing oak systems such as controlled burns and herbicide use. But, as Keyser says, it takes a few decades to see results in the forest. She will be retired by the time the femelschlag experiment is finished. 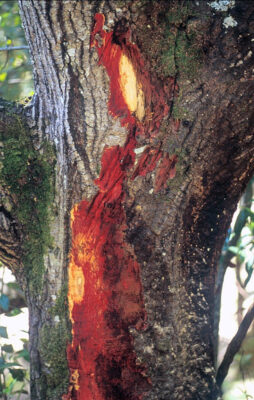 With researchers and foresters just beginning to understand how oaks regenerate in Appalachia, those in other regions warn of a foreboding story of the oak’s future: microorganism pathogens that, once taken hold, cannot be stopped. These microorganisms are responsible for sudden oak death and oak wilt.

Sudden oak death is caused by a water mold pathogen that spreads through water, and has killed oaks across California and southern Oregon. The pathogen affects some plant families without killing them, granting covert access at nurseries. In California, where millions of oaks have died, the disease spreads through the canopy, but does not kill a tree unless it finds a wound in the trunk.

Oak wilt is a fungus that disables the tree’s water-transporting function and causes leaves to wilt and fall. Spread through interconnecting roots, a native beetle, and human movement of infected wood, the disease extends across the Upper Midwest and central Texas, and has been sparsely recorded in Central and Southern Appalachia. It kills red oaks within a year, while white oaks die more slowly.

Ryan Huish, a biology professor who studies human-plant relationships at the University of Virginia’s College at Wise, is concerned with what he considers could be the next chestnut blight.

There are Eastern locations where the sudden oak death pathogen has been found but likely contained in nurseries. No confirmed cases exist of an oak dying from the disease in the East, according to Huish. Ed Burlett, southwest regional supervisor at the Virginia Department of Agriculture and Conservation, surveys nursery plants annually for sudden oak death, especially when nurseries order plant stock that could carry the disease. Nurseries that order rhododendrons, camellias or any of the many possible host plants from the West Coast risk spreading it in the East.

In Virginia, there has not been any sudden oak death detected since 2015 — but in 2019, nursery shipments with infected rhododendrons landed in Rural King and Wal-Mart stores in West Virginia and Tennessee. Annual surveys currently being conducted will confirm whether the disease is contained within the nurseries. Burlett occasionally conducts outreach education to those in the nursery trade, and encourages buyers to be vigilant in sourcing local plants as well.

While Huish hypothesizes that the general health and integrity of Appalachian forests have kept these pathogens at bay, he is uncertain about the future. Along with logging, the stress of a changing climate and erratic weather patterns combined with increased fragmentation and disturbance of forests make Appalachian trees more susceptible to blights and pests, as seen with the American chestnut and Eastern hemlock.

Witnessing a massive die-off of mountain ash trees due to the emerald ash borer, Huish felt “a call to prevent a similar fate for the oaks.” But he knew tackling this work was much more than what a lone researcher in Southwest Virginia could undertake.

To prepare, Huish is forming the Oak Conservation Alliance with a network of researchers, non-governmental organizations, educators, foresters, hunters and concerned citizens to monitor Appalachian forests and learn from other regions.

One important ally is the Morton Arboretum in northern Illinois. A hub for tree research, scientists at the Arboretum’s Center for Tree Science are building webs of resilience, such as founding transnational oak conservation networks and connecting research across the globe.

“It’s important to understand what trees are doing now,” says Chuck Cannon, director of the Center for Tree Science. He oversees research on oak wilt-infected trees in Illinois, and is helping to write proposals to connect different regions into a sort of “sentinel network.” Studying the submerged, underground root system, which is how trees communicate and also how these diseases can spread, requires more technology than what is available.

“These regional networks are key to diagnosing and preventing in the early stage,” says Cannon. “Because if we wait too long there’s not much we can do.”

Huish envisions the alliance with three main branches: forest monitoring, pathogen research and human connection. Monitoring is vital in this current stage, as early detection leads to successful eradication, according to Burlett with the Virginia Department of Agriculture and Conservation. Drone and satellite imagery can determine which plants are stressed in a forest, as they emit certain stress chemicals indicating specific pathogens, giving a new view of the vast public and privately owned forests of the Southeast.

Huish is working with three partner organizations to develop methods for community members to take part in monitoring efforts. The alliance is creating a section on the citizen science app iNaturalist to upload data on infected oaks. Depending on funding, testing kits for sudden oak death may be available to confirm reports and differentiate from other stresses and pathogens that can look like the disease. Huish fears that it has taken hold but no one is noticing it.

The human connection contains vast potential in Huish’s mind, as acknowledging oaks’ contributions to a sense of culture and place is vital, he says. Education and citizen science among interdisciplinary groups, from indigenous peoples to schoolchildren, is the strength of the alliance, according to Huish. He is talking to local mountain musicians about writing songs lamenting the chestnut loss and its impact on culture. Creative, theatrical productions are on his mind as well.

“One of the goals is to show this web of connections,” says Huish, to “help us justify why and how we need to protect the oaks.”

The Oak Conservation Alliance is gathering funds and forming partners. Email Ryan Huish at rdh5b@uvawise.edu if you are interested in taking part in this oak research, monitoring and education. In 2020, Huish plans to host community forums across the region to train citizen scientists in monitoring oaks. Dates will be posted at appvoices.org/calendar. 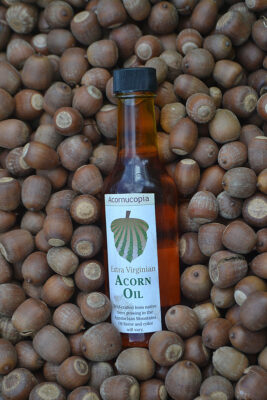 Acorn oil from the Acornucopia Project.

Eating native food is Bill Whipple’s mission in Asheville, N.C. He and fellow tree orchard enthusiasts started the Nutty Buddy Collective, focused on re-wilding popular cuisine. With subsidized, commercial agriculture being a major contributor to greenhouse gases, says Whipple, “we really need to rethink about where we get our food.”

The collective gathers acorns, black walnuts and hickory nuts in mowed fields and urban areas and then processes them into flour, crackers and oil as part of the Acornucopia Project. Oaks are what made humans clever, Whipple contends, as he thinks that the complex process of leaching tannins and grinding acorns to access their nutrients helped ancient humanoids transition away from eating sticks and leaves, thus developing their brains.

Whipple campaigns at farmers markets and the local food co-op to cultivate a taste for wild nuts in the local market, in an effort to eventually convince farmers at large to incorporate native nut trees in cow pastures, or replace corn and soy crops with walnut and oak orchards. Not only are trees an appropriate companion plant for pastures, according to Whipple, but clear pastures are perfect for gathering nuts.

“Every piece of corn that someone doesn’t eat because of eating acorn is a step in the right direction,” says Whipple. “If we humans value oaks then we’ll take better care of them.”